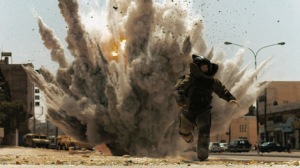 Starring Jeremy Renner, Anthony Mackie, Brian Geraghty, Guy Pearce, Ralph Fiennes, David Morse, Evangeline Lilly
“War is a drug”. That is the part of the opening quote on screen that is highlighted as the rest of the words fade away. While protagonist Sgt. William James takes pleasure in his work of diffusing bombs left behind by the Iraqi insurgents, I don’t know if I would ever equivocate this with a drug. Kathryn Bigelow, ex-wife of James Cameron and an incredibly successful action movie director and producer in her own right, brings us this unusually quiet film about living and surviving in a war zone.
The film follows Sgt. William James, a specialist in bomb diffusion during his 40 day tour with a pair of soldiers assigned to the Explosive Ordinance Diffusal (EOD). There is no villain or A to B plotline, rather a series of episodes centered around different types of incendiaries. While James exudes a smug bravado about the work he does, however Sgts. Sanborn and Eldridge think James isn’t taking the weight of his job seriously. Back home, James has an ex-wife and infant son and his relationship with both exists in a vague “other” state. An incident occurs during a routine mission to recover some stolen mortars that send James into a nervous breakdown. The rest of the film plays this breakdown out in an unexpected way and leaves us with a lot more questions about the nature of war.
I found this film to be addressing a lot of issues related to our understanding of mortality. The men who suit up and walk right up to the bombs to lay C-4 seem so comfortable with death that it creates unease in the men working under them. One character feels so threatened by James that at one point he talks to another officer about how easy it would be to set off an explosive in the sergeant’s face. Despite James being a “wild man”, as one colonel says, there are scenes that illuminate a nurturer. As Sanborn lies prone with a scoped rifle, seeking out the insurgents firing on them, James grabs a Capri Sun and holds it so Sanborn can drink. While he does this he talks encouragingly to Sanborn about his belief in his ability to take the enemy out, like a father cheering junior on at a Little League game. James also develops a relationship with a young boy selling bootleg DVDs on base. It’s his relationship with this child that creates an interesting counterpoint to his seeming coldness towards his own infant son back home.
The Hurt Locker is a Tense movie with a capital “T”. Very few films have me cringing in expectation of some thing bad happening on screen. In so many films and television series we see people working to diffuse bombs and we never feel the urgency. Bigelow manages to squeeze that from us through masterful editing. The Iraqi citizens who watch the procedures from balconies are viewed with suspicion, not knowing if one of them is holding a cell phone used to trigger the bomb being diffused. On the flip side, the film makes sure to state that this is not Blackhawk Down, every person you see is not a secret terrorist. Most people are simply average joes, working to make enough to keep on living and surviving. In the same way, this is why James devotes himself to this line work. He knows nothing else. He knows he should love his wife and son, but he just can’t. All he knows is how to deconstruct these vessels of death and in doing so he defeats his mortality till the next time.