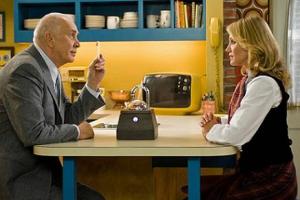 It was October 2001 and had become intrigued with a film trailer I came across online. The film was Donnie Darko and the picture looked to have a quirky, creepy vibe that brought up memories of David Lynch for me. The film opened at the Belcourt, I convinced some friends to go to the opening night showing and was duly impressed. I saw it a few more times in the theater and bought it on DVD and listened through the director’s commentary multiple times. It was a film that was enigmatic but seemed to have an answer to its own puzzle if you paid close enough attention. This was the first and last time Richard Kelly would impress me.

The Box is based on the Richard Matheson short story “Button, Button”, which was adapted for the various incarnations of The Twilight Zone and has one of those plots that seems very archetypal. It’s 1976 and Norma and Arthur Lewis (Diaz and Mardsen, respectively) live in Richmond, Virgina. Norma works as an English teacher for a private school and Arthur as an engineer for NASA. Their lives change one day when a mysterious box ends up on their doorstep. The box contains a large red button set in a finished wood casing and covered with a locked glass dome. Inside the box also contains a note letting them know a gentlemen will be by to explain that evening. Cue Mr. Arlington Steward (Langella). Steward explains that if the couple presses the button they will receive a million dollars and someone in the world, whom they don’t know will die. Steward gives them a day to decide.

You don’t have to have read the short story to know where this is going and it wouldn’t make for an interesting film if our characters chose honorably. And it is at this point that the movie goes completely off the tracks, but damn its beautiful as it does! Kelly is no slouch when it comes to cinematography, he knows exactly how to frame a shot and give us gorgeous images. With this feature, he’s evoking lots of classic Kubrickian techniques (i.e. tightly framed shot with action coming in and out of them, cold imagery). There’s the Twilight Zone vibe, that’s to be expected and interesting nod to Hitchcock, particularly in the musical score.

Kelly’s weakness lies in his inability to shape a tightly written, comprehensible plot. With Darko, he could cheat a bit and the film still stands as a nice piece of cinema. He displayed a considerable lack of restraint with his follow up, Southland Tales, a film I am fairly certain even the actors couldn’t have understood. Part of me admires Kelly for attempting such large, cosmic and transcendental themes in his work, yet I can’t give him a standing ovation till he shows he has the ability to pull it off semi-successfully. The Box ends up getting bogged down in, what are becoming, Kelly’s signatures (water imagery, portals, scenes intentionally left out). From an atmospheric point of view Kelly is a genius, but as an overall film this fails from a mixture of way too out there and a sort of adolescent allegory that clunks you on the head in the finale. A wonderful experiment, but a disaster in the end.