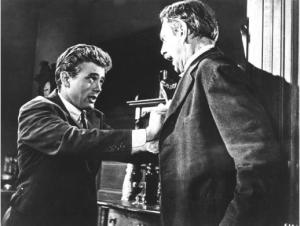 This month, I’ll be looking at the three core works of James Dean’s sadly short career. I didn’t see any of these films until 2007 when, while living in Washington state, I decided to check out Giant from the public library. What I discovered was the reason behind an icon. So often a pop culture figure’s work has been so far removed from our contemporary experiences that it is hard to understand exactly how they became so iconic. I have found that Dean was indeed a brilliant actor with a potential I don’t see in many others.

Dean made his starring role debut in Elia Kazan’s East of Eden (based on the novel of John Steinbeck), playing the tragic loner Cal Trask. Cal is the son of Adam, a farmer and brother to Aron. Throughout his life, Cal has been overshadowed by Aron’s accomplishments and looked at as the black sheep of the family. The mother mysteriously disappeared when the boys were children and Cal remembers little of her. The story is a reworking of the Cain and Abel story and mixes it with the gorgeous landscape of Salinas and Monterey, California.

The filmmaking at work here is a unique artifact of its time. Kazan is a deft director who is responsible for such masterpieces as On the Waterfront and A Streetcar Named Desire. And it was Kazan’s keen eye who discovered James Dean as he was performing on Broadway. Dean was a major proponent of method acting, a technique that transitioned from the more classical theatrical style of acting into a more psychological and physically interpretive method. Method acting bridges a sort of gap between acting and dance. This is seen in the way Dean almost spasms through his performance, he twists and contorts his body in unison with the psychological torment. The character of Cal is stunted mentally and Dean chooses to express that through his movement. Cal is constantly jamming his hands into his pockets, kicking at the dirt nervously, just like an awkward adolescent.

Dean was reportedly very uncooperative on set, and Kazan admitted he would encourage this by antagonizing the actor. Kazan believed that keeping Dean in such a mentally upset state would, in turn, enhance the anger and frustration of Cal on the screen. Dean’s co-star, Julie Harris is credited with truly enhancing the performance by adjusting her own to become more low-key and further highlight the distinction of what Dean was doing. For a first major film performance, Dean delivers in an astonishing way. Method acting was a new and exciting development in theater and its no wonder audiences were entranced with Dean.

Coming up next: I take a look at the film that made Dean an icon, Rebel Without A Cause.