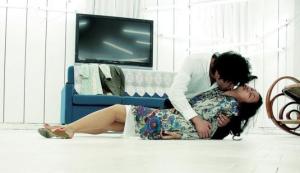 What if Double Indemnity was a vampire flick? That’s part of the premise going on in this visually startling South Korean horror flick. I’ve only seen one other Chan-wook Park film (Oldboy) and now after Thirst, I know I need to see more. No other country in the South Asian region produces films that excite me as strongly as South Korea. Unlike their neighbors, South Korea seems to find a perfect balance between the craftsmanship or artsier fare and the dynamic storytelling of Hollywood films. So how does this vampire noir stack up?

Father Sang-hyun is living in a world infected by the Emmanuel virus, a plague that behaves like a sort of super leprosy, affecting only men. Sang has grown tired of seeing the patients of his Catholic hospice dying and volunteers to be a guinea pig for vaccine tests. He ends up being the only one of 500 test subjects to survive, after receiving a life saving blood transfusion. Sang returns to his parish only to be greeted by a throngs of devotees believing him to be some sort of savior. Sang has doubts but nevertheless comes to the hospital bed of a cancer patient. As fate might have it, the patient is Sang’s childhood friend Kang-woo, who is married to Tae-ju, a girl they both fancied years ago. Along with this, Sang has developed an unnatural thirst as a result of the transfusion, he now craves blood. First, he gets it from a coma patient in his hospice but the hunger grows stronger and after ending up in a illicit relationship with Tae-ju it is obvious things will not end well.

The first thing you’ll notice about this feature is the strength of the visuals. No matter what anyone thinks of the quality of story and character development, you have to give up for some crazy and inventive camera play. In many ways Park is disciple of the Tarantino-aesthetic. The camera will maneuver in ways that are not physically possible, yet Park is able to hide the CG trickery in a way that never takes you out of the film. Thirst is also not short on gore, but more in the sound department than visual. When Sang suckles on an IV or an open wound, the noise of his slurping swallows up the screen. There is a lot of blood and some moderate subtle gore, but it will be the sounds that linger with you.

The two main characters, Sang and Tae-ju are perfect counterbalances to each other, a sort of Korean Macbeth and Lady Macbeth. Sang is contemplative and worried about his condition while Tae-ju is desperate and manic about exploiting his vampirism for her own gain. The film balances its horror with some comedy and the mix of the two is very disturbing. A great piece of counter-programming to Twilight and would be an awesome double feature with Let the Right One In.