While I really don’t enjoy found footage horror films, when the genre is applied to literature or, in this case, audio drama, it works much better in my opinion. The premise of Tanis is that journalist Nic Silver is attempting to uncover what Tanis, a word mentioned in a myriad of sources, is. Is it a person, a place? Why are famous occultists obsessed with it? How does it connect to other urban legends and modern horrors? If you are a fan of slow burning, very creepy, conspiracy theory stories Tanis will provide you with many hours of entertainment. Currently, Season 1 (12 episodes) is available with Season 2 on its seventh of 12 total episodes.

This was the first movie podcast I ever listened to starting way back in 2005. At the time it was Adam and Sam Van Hallgren hosting, but the latter has moved on to a producing role. No matter the hosts, the film has always maintained a high level of discussion about film. Kempenaar is an instructor at the University of Chicago and Larsen spent over a decade reviewing films for the Chicago Sun-Times. Both men have a very deep knowledge of film and work to spotlight picture beyond what has currently opened at the cineplex. This podcast has probably been the biggest inspiration to my love of film introducing me to filmmakers like Wim Wenders, John Cassavetes, and Robert Altman. Even if you have an extensive film knowledge you will learn something from listening to this series.

How Did This Get Made? (Earwolf, Hosted by Paul Scheer, June Diane-Raphael, and Jason Mantzoukas) 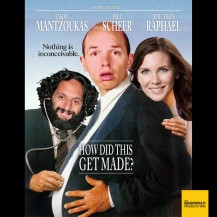 Inspired by Mystery Science Theater 3000 and a plethora of books detailing the “worst films ever made” these three comedians and actors set out to make a series where they explored travesties of cinema in depth. Episode One spotlighted Burlesque; Christina Aguilera and Cher’s gaudy passion project. From there they have looked at films like The Last Airbender, Masters of the Universe, and Zardoz. Some particular highlights have been A View to a Kill, Glitter, and the god awful sequel to Saturday Night Fever, Staying Alive. A very high energy podcast that has very charismatic and witty hosts that make watching bad films a pleasure.

Lauren Lapkus had become a staple on Comedy Bang Bang thanks to her variety of characters. When she decided to start her own podcast instead of hosting she opted to make the host rotating and to play a different character on each episode. This lets the guest come up with the concept of the show, the topic of conversation and even the basics of Lapkus’ own character. In fact, Lapkus doesn’t know any of this information until they start recording the episode and loves being made to improvise it all on the spot. A nice surprising podcast that never fails to present something unique and funny.