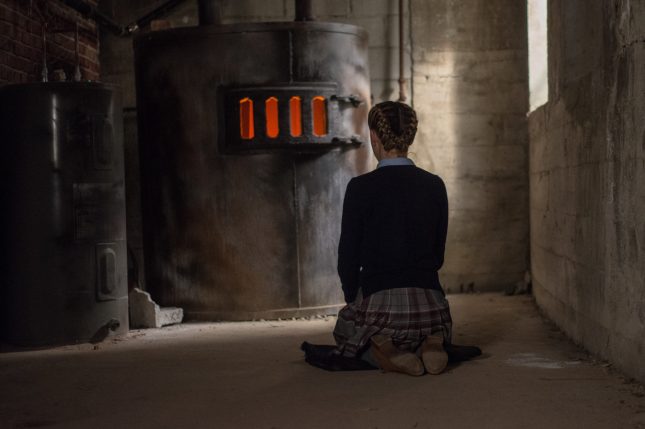 A weekend break is here for the students at Bramford Academy, a girls’ boarding in the Northeast. It’s a snow-covered February weekend, and Kat and Rose find themselves stranded with neither of their parents showing up to collect them. The headmaster leaves them under the watch of two sisters that look over the school, but for the most part, the girls are left to their own devices. Kat has been having strange dreams about her parents dying and is convinced that is why they haven’t shown up. Rose has bigger things on her mind, worried about a possible pregnancy from a local young man. All throughout the school, though, there is a strong presence evil. And who is the mysterious young woman Joan who is hitchhiking her way towards Bramford?

I was floored by how good The Blackcoat’s Daughter turned out to be. From the opening frames, there is a concerted effort to build a dark atmosphere, anticipating the coming horror. The director chooses to spend time developing the characters and not through heavy exposition. Perkins understands that often spouted film advice of “Show, don’t tell.” While some reviewers are expressing their dislike of the movie due to its slow burn nature, I see it as the same structuring that made The Witch so lucky. We learn who Kat is, not some facts about her life, but about the core of her character and her values through her actions and interactions with Rose.

The plot of The Blackcoat’s Daughter is not anything beyond a traditional horror film or short story, but it is the way that the aspects of production build that horror through lighting, cinematography, and music that draw you in despite knowing that this story is going to end up in some incredibly dark places. The music, in particular, composed by Osgood’s musician brother Elvis Perkins, is heavy with low strings and the faint pained echoes and chants of humor voices layered underneath the despair.

The acting is quite superb and is a style I personally see as a great litmus test for the quality of an artist’s talents. The performances demand a certain quiet and subtlety and Kiernan Shipka as Kat stands at the front of the cast with a performance that is powerful beyond her years. Having come of age on Mad Men, a show I often cite for cultivating a more controlled and nuanced style of acting, she has definitely learned a lot about what a powerful tool the face can be, with some expressions conveying tons of emotional weight. Lucy Boynton as Rose is tasked with a difficult role, carrying most of the film’s dialogue and could have easily come across as a cliched “cold ice queen/bitch”. Instead, she bring complexity to a character who is going through a difficult time, worried about the possibility of an unplanned pregnancy and what they would do to her life.

The film is not something that will appeal to all viewers and rewards one who chooses to be patient and thoughtful while meditating on images or sounds. When the nature of the horror is finally revealed in the last act of the film, it doesn’t flinch from showing realistic depictions of violence, in this instance with a kitchen knife. The final image of the film is haunting one, a figure in deep psychic pain and someone we are left asking so many questions. Parsing through the events of the picture and asking what was real, what certain gestures meant, and what happens next for this lone survivor of the events who appears to live in an unending nightmare.