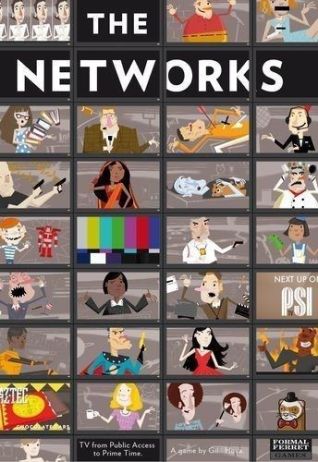 Damn, I love this game! The premise of The Networks is that each player is running a fledgling television station. Each network has a minuscule deck of three starting shows with zero viewers, one star, and one advertisement. The game is played over the course of Five Seasons, or rounds, with each season 1, 2-3, and 4-5 bringing different television shows with different requirements and benefits. At the end of each season, income/expenses are calculated, and viewership (the main scoring mechanic) is tallied. At the end of season 5, whichever network has the highest number of viewers wins.

I’ve played four sessions of The Networks since picking it up, all in the two-players mode and have a had a lot of fun with the game. Like most new games, that first session is about comprehending rules and learning the vocabulary of the game. By the second session things were running smoothly and by the most recent game, my wife and I had keyed into the flow of the game. Even so, there is a lot of apparent depth to The Networks as it provides alternate game boards for solo play, 3 player, and 4-5 player versions, plus the manual mentions an Advanced mode and Interactive mode, all of which I have yet to delve into.

The thing that strikes you first about The Networks is the stylized humorous artwork. The game board and cards have a beautiful, clean design, that feels very modern. Each card in the television shows deck is a joke about a current tv series, Doctor What as opposed to Doctor Who, The Cubicle for The Office, and they get crazier than that. The advertisement deck is also filled with funny invented products, Reflux Orange Juice being a funny and too real example. The Star Deck features actors and personalities to plug into your shows which provide additional ratings, but often cost to keep on your shows season after season.

Finally, there is the Network deck which provides special abilities that either trigger immediately, on your next turn or are saved for the endgame points tally. One Network card lets you keep a show from aging, so you retain its current viewership into the next season. Other cards let you delve into a deck and draw a Star for free or snatch an ad that isn’t laid out on the table. Network cards require you burn an element on the table though and each season there are only so many of each card type available. Once all the Shows or Stars are gone from the table that season no more will be coming till the next. In this way, the game sets a pace so that play is always moving forward and never stalls out. To put a Show on the air will have a requirement, marked on the bottom of the card as either a Star or an Ad. And some Stars and Ad even have a preferred genre or time slot, that if not fulfilled force you to rotate the card when played and take a significantly lesser viewer number or ad revenue amount.

Players choose one action per turn, and in the two player game, every third turn forces the current player to burn one element on the board. At any time a player can Drop & Budget, meaning they end the season and collect money from a Budget track. The first player to drop gets the most money or can choose to add viewers, the second player will get slightly less of both choices. In the two player game, once the first player Drops & Budgets, a cube blocks off a space on the turn wheel, this leads to the remaining player being forced to burn something from the table on every other turn. It took a couple games for this mechanic to click with me, and now I love it. This forced burn causes the remaining player to not take over the game and leave the Dropped player tapping their toes waiting for the next Season.

If you choose to cancel a show, it goes into your Reruns deck and gets a small number of viewers in your end Season tally. When the next Season starts, current Reruns are placed in your Archives deck, and if you have three or five of a kind in a Genre, you get some pretty powerful bonuses typically a free no-Burn draw of Stars, Ads, and Shows from the unused decks. This Archive mechanic also pushes another type of strategy where purchasing a show and then canceling it, in anticipation of the next season, could levy some advantages.

The Networks has been the first game I cracked open post-Origins 2017 and feels like the game I was waiting for. While I am not a terribly huge fan of card drafting games, the premise of The Networks and its smooth, comprehensible mechanics create a comfortable flow that I get absorbed into. I additionally love the set number of Seasons and the forced Burn mechanic that prevent a session from sliding into drudgery. Burns allow you to play defensively or offensively and require you to pay as close attention to your opponent’s strategy as your own. With many more modes of play left to explore, I am looking forward to playing The Networks for a long time to come.