I have a soft spot for deceptively simple card games, those games that come in small-ish boxes and seem to just be a few cards and maybe half a dozen tokens. It doesn’t look like much, but upon playing them, you start to see the depth of strategy lying underneath. Love Letter was like this for me, and subsequently, Sushi Go among others. Belle of the Ball is another game that falls into this deceptively simple category.

The conceit of Belle of the Ball is that each player is hosting their own party on the final night of Carnivale on the island of Ludobel. There are only so many guests to go around, and the players are determined to make sure their respective parties have the best guests and the best conversations. To make this happen, they will need to be a little bit sneaky and ruthless. To ensure you have the best possible party you need to group guests based on what their interests are so that they get along and have an enjoyable time together.

Each player is dealt three guests with which to begin their groups. Each guest card has three symbols denoting an interest. A Heart may mean the guest likes to talk about relationships or a Mug of Beer may say that they like to drink a lot. As you collect more guests, you want to match them with a group of people who share at least one or more interest. Once a group has four people in it the group is scored and discarded, and you can start to build a new group, only having three being made at one time. 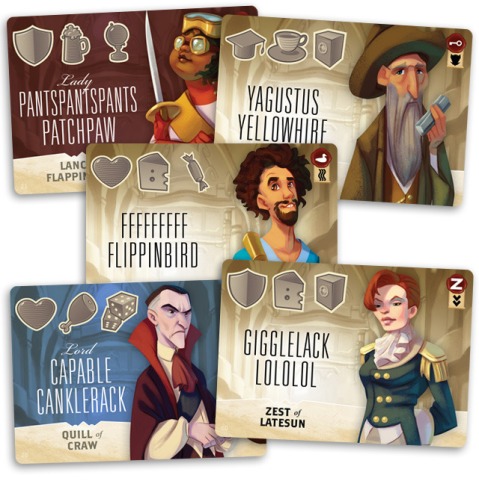 Guests come from the guest deck, with six cards facing up. Players must pick guests based on their order in line. So you can take the first guest in line for free. However, if you notice a guests three spots back is a better match for a group you’re building you can spend Regrets to get to them. Regrets are simply the backside of the Guest cards. At the beginning of play, you are dealt some Regrets (I believe four or five in the two player game I played). You keep these Regrets face down (The guest side won’t matter during the game) and spend them to skip spots in line. To get that guest three spots from the front, you’ll have to lay down two Regrets to reach them. Those Regrets remain next to those first two guests, and whichever player picks those guests ALSO gets the Regrets. So this means spending all your Regrets quickly leaves you stuck with whoever is first in line and gives a lot more flexibility to the other players.

There is a second line of cards next to the Guests called the Belle cards. These are where you as the Host get to do some tricky things to bolster your party while messing with your opponents. The Belle cards consist of three types: Mayhem (instant effects), Mirth (played on your own groups), and Mischief (played on opponent’s groups). Many of these cards directly target the Interests on the Guest cards. For example, Food Poisoning cancels out counting any of the Cheese interest icons on a group’s cards. Mirth and Mischief cards must be played onto a group and count as one of the four cards that make a group. You may keep as many Belle cards in your hands as you would like and drawing them works the same way as picking a Guest card. If you don’t want the first one in the line, you’ll need to spend regrets to get to a card further back.

We had a quite a bit of fun playing Belle of the Ball. In our first game, we didn’t really use Regrets or take advantage of the Belle cards like we should. On the subsequent play throughs, we really started tossing Regrets around so that economy felt very fluid and volatile. Once the Belle cards started being snatched up and played, I began to see how chaotically fun the game could be. I have only experienced it with two players so far but can imagine what it’s like when three or four are tossing out Mischief cards left and right, ruining the plans of a Host. Belle is a game that would be easy enough to teach one of my third-grade students, but keying into all the strategies that can mess with the matching mechanic will take a little longer to master.