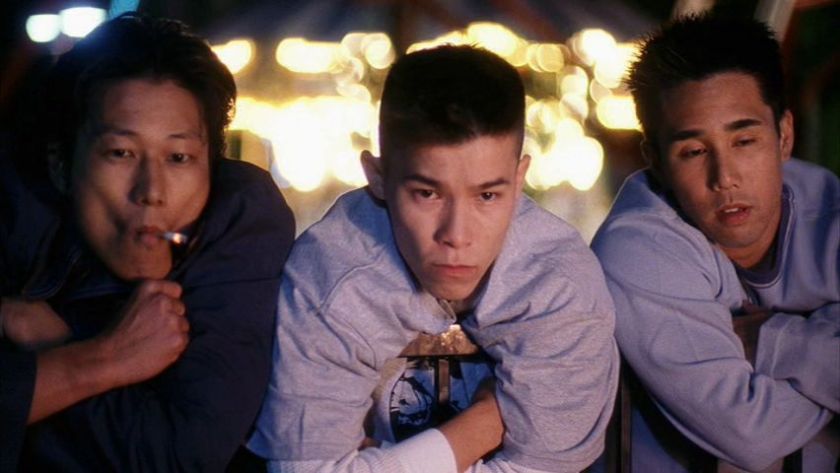 Ben and Virgil are two Asian-American high school students following the stereotypical honor roll/high achiever path. They participate in extracurricular clubs and sports to pad their applications for college, but there is a hidden side to their lives. At night they pull dumb childish pranks and make petty cash on a computer equipment scam with Virgil’s cousin Han. This changes when the trio become involved with Daric Loo, the golden boy of their high school who pushes them to get involved in drugs and larger scale crime. During this Ben has a major crush on Stephanie, his lab partner. However, Stephanie has a boyfriend, Steve (John Cho). Ben’s activities lead to a violent end and a cell phone ringing from underneath the sod laid across Virgil’s back yard

I know what you’re saying. “Um, Seth. This is NOT a Fast & The Furious film! It doesn’t have anything to do with it…other than the director.” First, this is the first breakout film for Justin Lin who would go on to become the director that would really set the F&F franchise on its current path. However, there is a character in this film that I have heard is in the F&F movies, though some argue it is just the same actor with the same name, but not the same character. I scoff at that! This film is firmly in the F&F Cinematic Universe dammit!

Better Luck Tomorrow is a pretty damn good movie. It is a little dated with the music and some of the clothing but dated in the sense of many John Hughes films, where there is a retroactive nostalgia present. This is helped because of the tone set by the script. The premise could easily have been a comedy: Asian honor students turn to crime. Instead, Lin makes this a dark, dramatic film with a sense of humor woven throughout. The opening scene, jumping ahead to the end of the movie, is extremely reminiscent of the opening of David Lynch’s Blue Velvet. This choice helps to say something about the film we’re about to watch. While it’s music and looks is very much of the era, it recognizes the great filmmakers that have come before.

Parry Shen, who plays the protagonist Ben, does an excellent job both on screen and through the expository voice-overs that explain what he and Virgil get up. He is able to portray an Asian-American teenager who does match the academic stereotype while showcasing all the ways Ben is not what we expect. All of the characters Lin presents us with are walking this line between following the demands of their culture while rebelling through every vice they can get their hands on.

But Beck Luck Tomorrow transcends being just a film about Asian-American teens. It’s a movie about what it is like to be a teen pressured with expectations of performance. This is also a film made on one of those famous shoestring budgets that shows how talented Lin is as a co-producer with stretching that money out. There are multiple camera angles and setups that show how good he already was so early in his career. Having not seen any of his Fast & Furious films yet, I am excited to see him hopefully bring some intelligence and pure fun to the series.

See you next time in The Fast & The Furious: Tokyo Drift