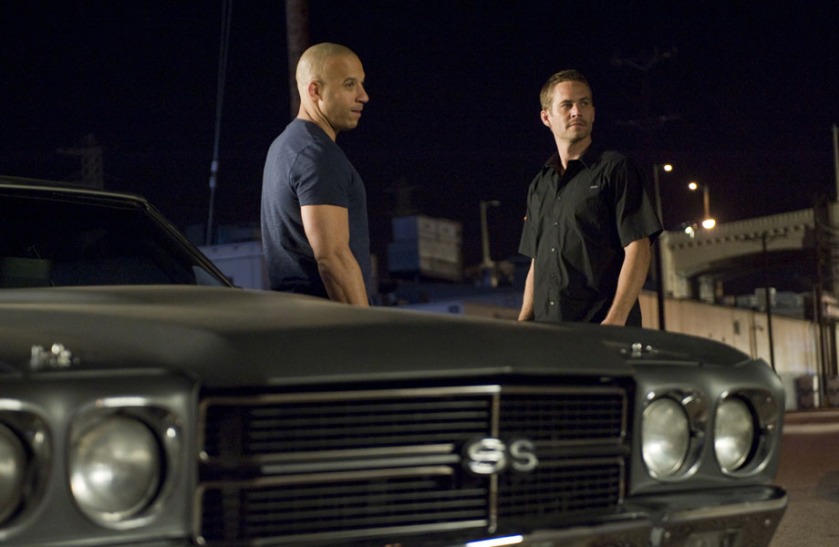 Five years have passed since The Fast & The Furious, and Dominic Toretto has set up shop in the Dominican Republic. His girlfriend Letty and partners, including Han from Tokyo Drift, are hijacking fuel tankers for money. The heat has increased too much, so the crew disbands and Dominic decides he will leave Letty to draw the heat off of her. Months later, while working Panama City, he learns that Letty has been killed and returns to Los Angeles to attend her funeral in secret. At the same time, Brian O’Connor has inexplicably been allowed to become an FBI Agent despite a continued pattern of lawbreaking. He is pursuing an arms dealer named Braga who wouldn’t you know it, is connected to Letty’s death. Plus, Brian and Mia rekindle their relationship from the first film, because he super serious didn’t mean to betray them all and really loves her.

I always like to start with the positives, and some things immediately stuck out to me. This film looks so much better than the first two films especially. This is likely due to the digital side of filmmaking making some huge leaps between 2001 and 2009. The images are very crisp and textured, eschewing that harsh overblown lighting of early 2000s films. It is also due in part to Justin Lin being a much better director than Rob Cohen and John Singleton when it comes to this type of film. Lin knows how to frame action with cars in a way that is interesting to watch.

I also liked how small scale the story was comparatively. There isn’t a sprawling cast, and most the film takes place between Toretto and O’Conner, with Mia appearing. The plot doesn’t have too many crazy twists: Toretto wants revenge for Letty’s death, O’Conner wants to bring down Braga, the two need to reconcile after the events of the first film. In many ways, F&F is the first direct sequel to the first movie. 2 Fast 2 Furious was a bizarre, grotesque diversion of the first picture while Tokyo Drift was a stand-alone story within the universe. This isn’t a masterpiece of cinema, but it is a definite step up regarding the overall quality of the franchise.

However, the main villain feels like a retread of 2F2F’s plot. O’Conner goes undercover with a partner to enter the inner circle of a big bad. Gal Gadot stars as Gisele, a liaison for Braga who ends up being a light romantic interest for Toretto, is very close to the Eva Mendes role from the second movie. That entire arc with Toretto feels weird in the film. She can’t end up with O’Conner because they need to declare his true love for Mia. But Toretto’s longtime lover just died so it would come off as incredibly callous for him to pursue Gisele while also hunting down Letty’s killer. It ends up just being the cliche “I wish I had someone who loves me as much as you loved her” relationship.

Brian O’Conner is also a horrible FBI Agent. One scene exemplifies why is should be locked up. Early on, there is another driver on Braga’s team that the script goes out of its way to show is an idiot and douchebag. He insults O’Conner and subsequently to secure a place on the team O’Conner plans an FBI sting to arrest the guy. He doesn’t just arrest him for crimes they likely could have documentation on, he plants drugs on the man and makes a big deal about rubbing his face in this fact. That is incredibly messed up, and I feel like O’Conner has *never* felt like a hero in any of these films. Just an arrogant jackass.

Fast & Furious is a relatively underwhelming film. It’s plot retreads a lot of stories already told in these films. The only real positive is that it does revisit and resolve the original movie. It looks better, and the opening action sequence was actually directed very well. After that moment, the rest of the film sort of slogs along to a pretty predictable ending.

Predictions for the next movie:
Now that we have Toretto, O’Conner, and Mia together and that the next movie is called Fast Five…there will be two more people added? Taj and Roman Pearce maybe? I’m also pretty sure I heard Gisele shows up again. And having the foresight gained from trailers I vaguely remember, I know Letty returns. Not sure if it’s this film or another. I hope we drop the whole illegal street racing angle with this next film because it’s really boring. Having the crew on the run from authorities has much more potential to be interesting and fun.