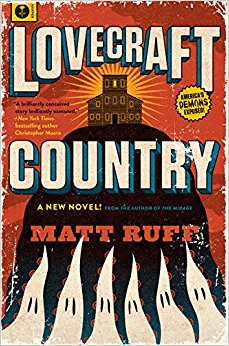 Black Army veteran Atticus Turner has come home to 1950s Chicago to find his father missing. Atticus suspects something sinister when he learns his volatile and proud father was seen leaving with a white man. With help from Uncle George and childhood friend Letitia, they travel to a remote village in New England. A conspiracy is uncovered and seemingly resolved in the first chapter. From there, the book is a series of interconnected short stories leading up to a finale where all the spotlighted characters converge for a resolution against the evil throughout the novel.

I was very surprised at the conclusion of the first chapter because I knew there were eight total in the book. That first story has a pretty clear conclusion with typical horror trope vibes that the evil is still out there. The second story stops following Atticus, who becomes an important but background figure until the final chapter. Instead, we follow Letitia as she purchases a house in a moderately white middle-class neighborhood with her spoils from the first chapter. As horror tropes would have this is a haunted house, and she encounters the sort of difficulties you would expect from such a problem.

Each chapter is a type of horror story, but not necessarily Lovecraftian. This is the part of the novel that confused me the most. The first section establishes a very Lovecraftian type of conflict, a secret cult in the backwoods of New England. But then we get a haunted house story, a heist story, a Jekyll/Hyde type of tale, among others. I had a very different expectation going into the book, and I can’t say it met that expectation. That said, it didn’t dislike it, but it never felt like an actual horror novel. More a pastiche that merged a conversation on race in America with some standard horror tropes.

Uncle Charles is the publisher of The Safe Negro Travel Guide, based on a real-life series of travelogues written specifically for Black Americans who were seeking to avoid the more racist and violent corners of this country. This had me anticipating some hazardous encounters between white authority and our protagonist, but besides a moment in the first chapter, none of the conflicts felt life-threatening. As characters are pulled into dire situations, there is never a sense that they might not make it. The stakes are just set way too low.

The main tone I associate with Lovecraftian cosmic horror is that sense of existential dread. It would have paired perfectly with the Jim Crow racism faced by the characters in the story. When they do face a racist foe, they seem to overcome them without any real struggle. There’s never an interesting deconstruction of Lovecraft’s personal prejudices other than a brief mention at the start. So while the premise of the book is rife with potential that would resonate through the ages, author Matt Ruff just seems to deliver a fun adventure story.

Jordan Peele (Get Out) and J.J. Abrams will be helming an HBO series adaptation of Lovecraft Country. I can definitely see how it would work as a television series in the vein of Lost or The Leftovers, spotlighting a different character each episode while an overarching plot is threaded within. I guess that the first season will be the plot of the novel and am curious what future seasons would be made up of. Peele is a filmmaker I feel confident will find interest angles to comment and critique on. My biggest hope is that television series finds more of its footing at a piece of Lovecraftian horror.