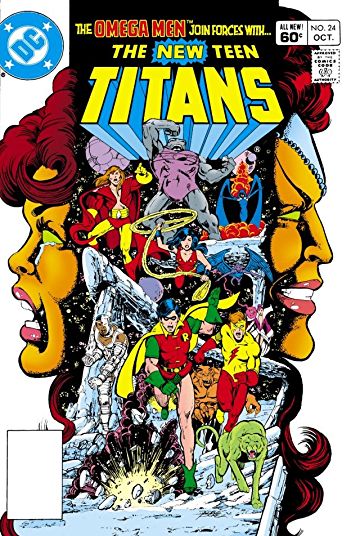 The Titans investigate the murder of a former friend of Cyborg’s which leads them to the cult of Brother Blood. He’s a dark religious figure who seems to have his grasp on the highest echelons of power across the globe and puts forward a convincing smear campaign against the Titans. The main event though is the team’s first meeting with Starfire’s sister, Komand’r aka Blackfire. The Titans team up with Superman and the Omega Men on a journey that hurtles them across the galaxy to the Vega System, embroiled in its major civil war. The goddess X’Hal is nearing resurrection, and the Citadel wants to control her. It’s up to our heroes, a long way from their home on Earth, to do something about it.

Volume 4 is a hell of a lot of fun. I enjoyed both stories a lot, notably the Brother Blood introduction. I’ve always known he was a significant part of the Titans’ Rogues Gallery but never really read anything about him. I’m interested to see when he shows back up again and in what capacity. The public’s turn against the Titans, seeing them as a rogue vigilante group, felt very much like an emulation of what Claremont was doing over at Marvel with the X-Men. As I’ve mentioned before, the entire genesis of the New Teen Titans was predicated on trying to recreate the magic the X-Men were performing regarding popularity in the late 1970s/early 1980s. By making the team out to be a public menace, Wolfman is pushing ever closer to that New Titans era where stories were a little more dangerous (at least for the time).

The marquee story from this collection is the Starfire one. It’s clear this was another attempt to mimic the success of the Phoenix Saga storyline from the X-Men. In both stories you have a team of Earthly heroes taken to a faraway star system, teamed up with a band of renegades, a powerful goddess is the object of everyone’s desire, and a romance between two lead characters is central to the story. It is undoubtedly an exhilarating story and feels like a culmination of so many plot threads that stretched back to the first issue. IN particular, Starfire comes to terms with her sister and the Citadel who had enslaved her. She is reunited with her family whom she thought dead. Most importantly, the “will they won’t they” romance between Starfire and Robin finally culminates.

One thematic throughline in this collection is the Titans walking a thin line between being honorable heroes and killing their foes. Starfire and Cyborg are driven to a murderous fury when they believe Brother Blood has killed their teammates. Later, when the team is in the Vega System, you can pretty much guarantee they kill during the brutal wars going on. District Attorney Adrian Chase (who will later go on to star as Vigilante in his own series) mulls over the idea of breaking the red tape of the legal system and enacting justice himself. These are the sort of interesting moral ambiguities that a lot of the rest of DC Comics didn’t really present all that often. Wolfman stated in the introduction to this series’ first collected volume that in rebooting the Titans, he wanted something that felt fresh, honest, and true to the voices of young people this age. This can definitely be felt here in volume 4 and is something he was only getting started with.