Rick Remender came to Marvel after receiving acclaim for his independent series Fear Agent. He would carve out his own niche in Marvel’s universe that would have some incredible highs regarding character development and rich storylines, but his tenure would come to close in a somewhat unspectacular way. Some creative missteps that are still looked back on as atrocious, plus the company’s choice to soft reboot the universe with the Secret Wars event left Remender without much left to say. He is still writing, primarily back on creator-owned material like Black Science and Seven to Eternity. But I would like to go back to his Marvel work and spend the rest of the year and into 2019 doing a very comprehensive read-through and review.

Remender started his time at Marvel on Uncanny X-Force, one of the very many spin-off titles in the X-Men branch of Marvel. X-Force is a moniker that has been used in dramatically different ways from Rob Liefeld’s early 1990s Cable-led X-Force to the Mike Allred wild reimagining in the early 2000s to where it stood in 2011 as a Wolverine-led black ops division of the X-Men. This team iteration had previously been established in a canceled title called merely X-Force. Remender’s new take kept virtually the same team, save a few dropped from the title. Here the roster was made of Wolverine, Psylocke, Deadpool, Archangel, and Fantomex.

Fantomex would likely be the least familiar character to a new reader at the time because he’d only been around since Grant Morrison’s run on X-Men in 2001. Fantomex is based on French anti-hero characters like Fantomas or Diabolik, but with Morrison’s signature twists. As a mutant, the character can alter reality on a small scale to create illusions. But what is the oddest development with the character is his external nervous system that exists as a techno-organic flying saucer called E.V.A. Fantomex was produced by the Weapon Plus program, the same people who engineered Wolverine, Sabretooth, etc. and raised in The World, a secret laboratory environment where the owners had complete control over time and space inside of it. This will play a prominent role in Remender’s time on X-Force.

To kick off his run, Remender makes some deep dives into X-Lore and has the team traveling to the moon to head off the imminent rebirth of Apocalypse. Apocalypse is a sort of uber-mutant, born in the days of ancient Egypt and heralding a despotic reign on Earth every time he shows his head. At this point in the character’s history, there seemed to be little new that could be done with him. Remender puts the focus on Archangel’s personal and torturous history with the villain while making sure Apocalypse isn’t reborn until near the end of the arc. This is the right choice because it cements what will be an ongoing element of the series, the relationship between Psylocke and Angel, the very heart of Remender’s larger storyline.

The artwork by Jerome Opena is divine, so vibrant with details. Opena is a Filipino artist with a very distinct style, or at least not coming from the schools of art the vast majority of contemporary arts hail from. There are two main art styles most prevalent in superhero comics which would be a classical style (merely attempting to depict characters in a slightly realistic manner with a few stylistic flourishes) or Japanese-inspired (drawing characters akin to manga). Opena’s work immediately reminded me of the European/Latin school of comic artists like Moebius or Ladronn. There is a particular texture to his pencils that lends dripping atmosphere and both a sense of claustrophobia or great expanse when needed. There is a creepiness to Apocalypse’s moon stronghold as a result that adds to the spirit of dread as the team enters. The new horsemen of Apocalypse are also depicted in a manner that makes each one unique and terrifying.

The Apocalypse Solution storyline provides a pivotal moment in the developments of all these characters, but chiefly Psylocke. A decision she makes, one we question the motivations of, ripples through the remainder of Remender’s run. This arc also establishes the idea of Apocalypse as a child when reborn, rather than a fully formed mutant tyrant. Remender is very interested in playing around with the notions of when evil manifests and is essentially reexamining that old question of “If you could go back in time, would you kill Hitler when he was a child?” Remender purposefully offers no easy answers, and his characters will spend a long time with this query. 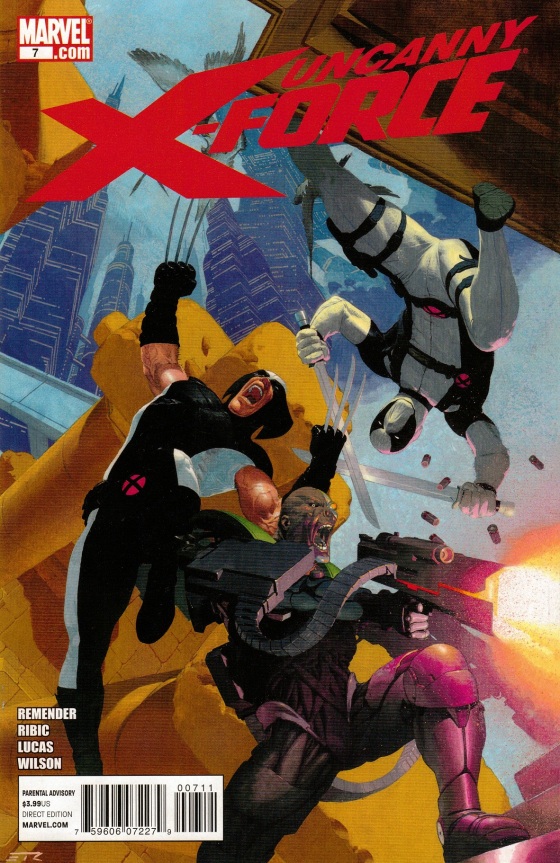 Deathlok Nation would set up an even more prevalent theme in Remender’s Marvel work and one that would continue to pop up right until his final release for the company, The Rage of Ultron. This collections opens on Fantomex being attacked by Deathlok-cyborgs assimilated from the Avengers of the future. They have been sent back to steal the miniaturized world from Fantomex’s grasp. He is helped however by the original Deathlok, Luther Manning. It’s a bit unclear as to whom it is that wants The World, but it is somewhat apparent they don’t plan on doing anything okay with it. The story culminates in Fantomex being forced to re-enlarge The World and baits the cyborgs into coming inside where he can use the reality-warping abilities of the tesseract to stop them.

Deathlok Nation is planting some plot seeds of varying sizes. The largest is the cyborg conspiracy, that there is a race of machine people working to subvert the future of organic life. This would return most prominently in Remender’s work on Secret Avengers but is being developed here. We also have Psylocke struggling with her decisions from the previous storyline and going to her brother Brian Braddock aka Captain Britain. He is appalled when she confesses to him, and that will return to haunt all of X-Force around the midpoint of the series. There is also the beginnings of mistrust between team members. Particularly in the final scene where a substantial secret Fantomex has been keeping is revealed only the reader.

Esad Ribic does the art on Deathlok Nation, and it is entirely in my wheelhouse as much as Opena’s work. They both encapsulate that every detailed-oriented and textured style of art that adds to the moodiness and weirdness a book like this needs. At the time, art on the core X-Men titles was reasonably lackluster (Greg Land, ugh) so X-Force had a distinct and great team of artists working. This is a standard that remained the entire time Remender was on the title.

These two books might be a little daunting to someone coming fresh to the X-Titles without any background. They don’t delve too deep into back history, but they operate in a way that isn’t about setting up primary characters and behaves as if we already know who they all are. If you can get past the details, the characters a reasonably easy enough to crack and figure out as you go. The next two volumes: The Dark Angel Saga Books One and Two will break the team wide open and go to some incredibly desolate places.