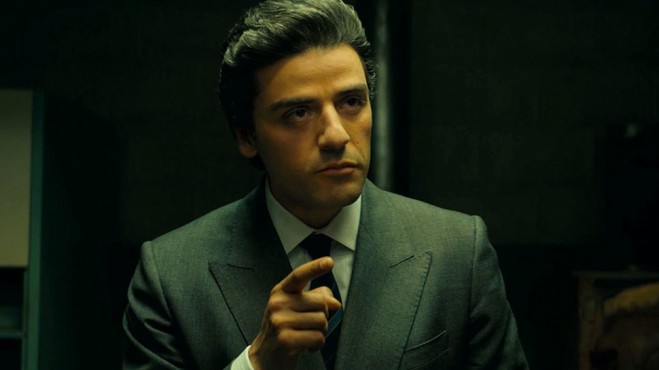 In 1981 New York, Abel Morales has brought his heating oil company to the verge of dominating the city’s market. He is in the midst of acquiring property from Hasidic businessmen when a series of truck robberies put his future into jeopardy. Abel is convinced that his rivals in the oil business are behind these hijackings. His wife, Anna, is upset that he seems frozen to take action and that is endangering their family and the company. At the same time, the city’s Assistant D.A. has been conducting an investigation on possible illegal practices in the industry and is filing charges against Abel’s company for possible price fixing and tax evasion. Despite all of these pressures, Abel is determined to follow a virtuous path but how long can he hold on to this?

I expected a movie about the New York mob scene in the early 1980s but was pleasantly surprised that I didn’t get a cliche-ridden mafia picture. Instead, A Most Violent Year is about a man in the midst of a corrupt system trying desperately to adhere to a moral code while every element around him is trying to push him off that tightrope.

I don’t have much experience with heating oil companies personally, though my parents used to have a propane tank on their property which was filled periodically by a company. I never would have expected such violence and thuggery around a seemingly mundane household utility, but the film is able to lay out why such a thing would be real and not comical. Heating oil was a seasonal resource in high demand and involved a series of sub-industries to have a functional business. Abel has to deal with the head of the Teamsters who is legitimately worried about the drivers who keep getting jumped and sent to the hospital. He wants to arm the drivers with guns, but Abel immediately sees the potential for an innocent bystander to be hit and killed in such a scenario. Abe’s drive to be dominant in the industry is also leading to his seeking independence in fuel importation. By owning this new chunk of riverfront land, he can have the oil brought by boat directly to his facility.

You may be thinking, “This movie doesn’t sound very violent” and you would be right. There are a few moments of violence on screen, but most of it is implied or remains out of our view. Instead, we have a story about an immigrant who is making good on the American Dream, to be financially successful and ultimately independent. However, Chandor is not so naive as to present us with the reality of achieving this dream. Despite all his moral conjecture, Abel still commits acts that transgress the law. When the police show up with a search warrant for his house, he has Anna stall them while he hides boxes of tax documents under the back deck. His justification for this is that Anna, who is also the company’s bookkeeper, needs time to go over them and address any discrepancies before the D.A. sees them.

Abel does commit a brutal act of violence when he finally does get his hands on one of the truck bandits. He beats the young man to a bloody pulp at a subway station and then pulls a gun he’d taken off the man’s accomplice. However, Abel pulls himself back from shooting and lets the young man go. Killing appears to be a line Abel won’t cross, or at least he’s uncomfortable being the one to pull the trigger. Anna shows off a pearl-handled derringer she’s bought behind his back, and this sends Abel into a fury. This isn’t because he is afraid of the dangers of the weapon, instead that it is unlicensed and therefore more material to be added to the case against him by the city.

A Most Violent Year does not upend crime cinema in any way. It is a solidly written, directed, and acted film that has a very complex central character for the audience to follow. The film’s themes aren’t particularly fresh, very well-explored territory. What I believe makes this film worth watching is that we aren’t watching the rise or fall of Abel Morales. Instead, we are watching what I would call the moment of choice. After the screen goes dark Abel makes his decision and we don’t get to see that. The audience must take in what they’ve seen and come away with their own thoughts on what sort of person Abel is becoming to be “successful.”