I hope you are enjoying the content I publish on my blog. If you feel compelled and are financially able to, I would greatly appreciate anything you could contribute to my Patreon. I will take it as your way of saying thanks and put that money towards growing the site in a slight manner.

Fantomex has been brought to the dimension of Otherworld and is on trial for crimes against reality at the hands of the Captain Britain Corps. Psylocke is torn between her growing relationship with Fantomex and her loyalty to her family in the Corps. Meanwhile, Wolverine and the rest of the team take on an ever-increasing occult threat that is burning up the countryside of Otherworld. Later, the life of Evan Sabah Nur is flipped upside down when the new Brotherhood of Evil Mutants comes to town. X-Force is set up on a mission to take down an assassin for hire network and end up tossed into the far future to see what they could become. Upon returning to the present day, Wolverine must strengthen his resolve to save Evan and take down a foe that touches close to home.

Rick Remender managed to bring his run on X-Force to an incredibly satisfying conclusion, an achievement that is hard to come by in comics these days. He doesn’t skimp on the big concepts and ideas and finds seamless ways to bring together elements from across the decades of X-Men lore. For instance, the Captain Britain Corps has always been such a bizarre part of these comics, not originally part of the X-Men books, but Alan Moore penned work from the U.K. division of Marvel. Eventually, Chris Claremont started writing Excalibur a title that merged the X-Men (Nightcrawler, Kitty Pryde, Rachel Summers) with these British characters into something surprisingly smart and fun.

Remender envisions the Captain Britain Corps, tasked with protecting the Omniverse as a darker totalitarian regime, emphasizing Psylocke’s aristocratic upbringing as a Braddock. It’s also the most interesting Brian Braddock aka Captain Britain has been in years and fleshes out their long-troubled eldest sibling Jamie in exciting ways. There is also continuing development of Fantomex and the Weapon program, introducing new villain The Skinless Man as another product of Fantomex’s makers. However, Otherworld is probably the weakest entry in Remender’s run. The plotting gets a little confusing, and the reveal of the real villain in the final issue feels like it could have been stronger. 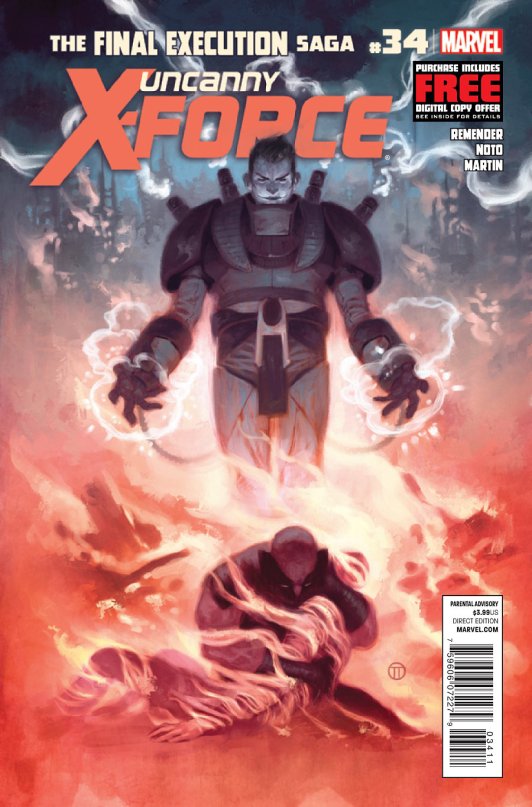 The Final Execution Saga is another thing entirely, strong from beginning to end, even with its time travel divergence at the start. Remender didn’t just throw in those sorts of “sidequests” for no reason. Much like X-Force’s trip to the Age of Apocalypse in the Dark Angel Saga, he is using this reflection of the team members to inform them about the consequences of operating as a secret kill squad. This feels like the first time Wolverine has genuinely faced his guilt over killing people. And even Psylocke, while billed as a psychic assassin, is continuing to deal with PTSD over participating in the murder of the newborn Apocalypse from the very first arc. Remender is confronting the readers in the same way the Brotherhood is forcing the anti-heroes to face down what they have done.

One of my personal favorite elements from this portion of the series is Remender’s writing on the Age of Apocalypse Nightcrawler. The character chose to remain behind after the Dark Angel Saga to seek out vengeance on those from his timeline who had hidden away on the main Marvel earth. We get a single story here where AoA Nightcrawler tracks down his reality’s Iceman, a double agent for the forces of Apocalypse. It ends up being a bloodless yet brutal takedown of his enemy and a very compellingly told story. Later, the AoA Blob, who is part of the new Brotherhood gets an unusually creative and gory death at the hands of Nightcrawler. Remender saves a third act twist with this character that sends him away from the team on terrible terms, a storyline that would be resolved months later by another author in another title.

Remender is pushing two themes over the course of The Final Execution Saga: Killing comes with a cost and do we have free will to change who we are. The latter issue is told through the story of poor Evan, the clone of Apocalypse created by Fantomex and raised in a holographic simulation of a childhood suspiciously similar to Superman’s. Evan has been enrolled as a student at the Jean Grey School for Higher Learning where the faculty is keeping an extremely close eye on him. Even so, Sabretooth abducts the boy and brings him to the new Brotherhood who decide to begin psychologically torturing him to prove a point. Evan is a non-entity in their plans, just a weapon to activate, and the real dig is at Wolverine to show him the true nature of people, that redemption is impossible.

I would also hand it to Remender that he made me like reading Deadpool as a character for the first time. Remender finds that fine line between breaking the fourth wall and making Deadpool face the consequences in the story that fixes a lot of problems I have with the character. In fact, Remender manages to make Deadpool essential the resolution of the story and in saving Evan. This relationship between the two would continue on in Remender’s work ultimately resolving in the event series Axis. The theme of our true natures, whether we are heroes or villains, would also be tackled there, though ultimately more clumsily.

And here we will pause on the exploration of Remender’s work for the summer. For the months of June and July I will be going back to read and review some big event blockbusters from DC Comics that were published in the 1980s and 1990s. I’ll be starting with Legends in just a few days. In the meantime, I’ll return to Remender’s work in August starting with his incredibly strange run on The Punisher.