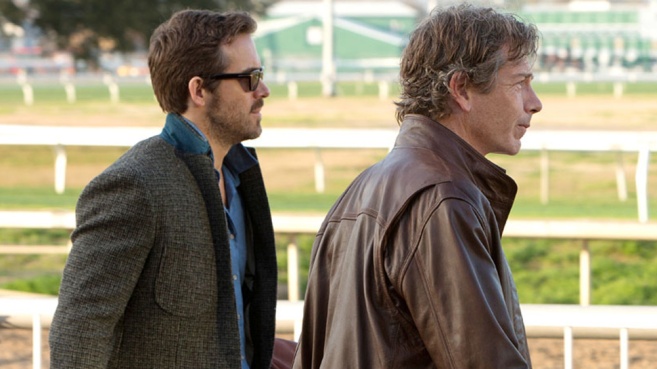 Gerry is a gambler who finds himself losing more than he wins, but he earns just enough to keep himself hooked on the game. During a Texas hold ‘em at a casino in Iowa, he meets Curtis. Curtis is a fellow gambler, though not as concerned about winning as he is with the rush of the game. The two men strike up a friendship quickly, and as Curtis is shuffling off down New Orleans, Gerry convinces him to travel down the highway, following the Mississippi and gambling as they go. The goal is to make $25,000 to buy into a high stakes private game in NOLA. However, Gerry doesn’t know when to quit and always pushes against the odds.

This is one of those hidden gems from A24 that doesn’t get talked about enough. The film makes obvious nods to Robert Altman’s gambling film California Split but doesn’t follow that formula. Instead of having one character as the calm, collected figure and the other as more neurotic we learn both men are riddled with personal and psychological problems. The duo ends up looking more like a couple of drunks enabling each other. When they reach those moments where they should step away, they both are so enthralled with the adrenaline rush of risk we watch them push past that boundary.

The damage caused by their addictions becomes apparent as we get to know them better. We see that Gerry is incredibly non-committal to his job as a realtor and he owes money to a bookie (Alfre Woodard). Later, he drops the fact that he has an ex-wife and daughter in Little Rock. Once Gerry hits rock bottom, we watch him stoop to the level of making a pitstop in Little Rock under the guise of “wanting to see his wife.” The moment he has the chance he attempts to steal money from her sock drawer. While never explicitly stated it is clear that Gerry left his family, not the other way around.

Curtis takes Gerry to St. Louis where they bunk with a lover of Curtis’, Simone, and her roommate, Vanessa. Curtis plies Simone with promises of helping her escape her life as a waitress/escort, invoking her to come with them to New Orleans. Simone plays along for awhile but then reminds him of the fact that he’ll never consistently have enough to take care of her, that she will have to fall back on this one profession she knows well to make ends meet. Gerry has a quiet aside with Vanessa where they both playfully flirt and eventually admit weaknesses about each other that they could only reveal safely to someone they will likely never see again.

The film teases the threat of Gerry’s bookie but subverts our expectations and refrains from making this a movie heavy on plot and about a race against time. Time has already run out for these two men, and now life is just them finding some way to make into the next day. Mississippi Grind is all the best of 1970s independent cinema brought into the 21st century. It shrugs off the cocksure macho bravado of that era in exchange for a profoundly sobering contemplation of addiction and the hopeless. It’s relatively sure that life will not brighten for Gerry or Curtis, but for a brief moment, they find themselves the benefactors of great luck. Having observed their patterns, the audience knows this won’t be enough, that they will continue to push and see where the breaking limit is. They’ll never stop grinding long enough to know when they’ve won.