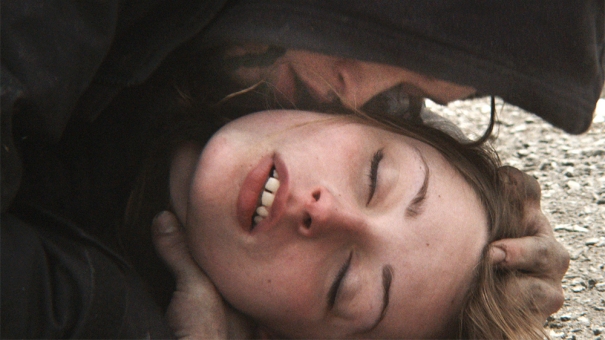 Harley has sunk deep into the heroin junkie community of New York City. Almost worse than her drug addiction is her obsession with the sadistic Ilya, a fellow homeless user that continually antagonizes and abuses Harley. In the opening scene of the film, her emotional overload leads Harley to slit her wrists in the middle of a park. After a few days in a psychiatric hospital, she wanders through life clinging to different destructive men who fail to help her escape this addiction. The rest of the film is a descent into the nightmare world of heroin addiction, a hazy exodus of repetition and remaining in stasis.

Heaven Knows What is based on a novel/memoir called Mad Love in New York City written by Arielle Holmes. Holmes plays her protagonist, Harley. Arielle personal journey with drug addiction began when smoke crack cocaine with her mother as a preteen. This led to the inevitable downslide into more drug use, dropping out of high school, becoming involved with the real Ilya, and then to writing her book and starring in the adaptation. Arielle was still using heroin during the filming of Heaven Only Knows and it was only after the film’s completion she reached out to the Safdie brothers to help her get into and complete rehab.

Heaven Knows What is a character piece, not a film concerned with plot beats or character arcs. It conveys the quicksand tone that life takes when drugs overtake your functions. For all the episodes that occur over the course of the hour and a half, Harley ends up right back where she started with very little changing because of her actions. We don’t have a definite conclusion, but we can infer about what the morning after will look like and what she’ll do to get more drugs. She lives in a chaotic routine, and we can surmise the pattern of her madness.

The movie combines many professional actors and non-actors so takes on a pseudo-documentary feel. Caleb Landry Jones plays the insidious Ilya and embodies that role entirely. Jones has always possessed a sinister quality, but we typically see him playing sniveling characters. Ilya is just a force of darkness, acting with little rationale beyond self-preservation. He stumbles across Harley who is panhandling outside of a bookstore and runs off with her duffel bag. He tosses it and eventually tells Harley where it is, but not after teasing her for a few moments. Later he suffers a slight overdose in the bathroom of a McDonald’s and Harley ruses to Ilya’s side staying with him as they go on a shoplifting spree. Their relationship feels horrifically real.

Much like their follow up, Good Time, this film continues to establish the Safdie brothers voice as incredibly unique in current cinema. They have touches of early Scorsese with how they focus on the rawness of life in the streets but shrug off any pretension of telling stories about members of the mob. The Safdie’s focus is on the people at the very bottom of the social ladder and with an emphasis on finding humanity even in people whose lives appear ugly to us. The brothers believe there is beauty in these dark places.