The Justice Society is ambushed by their nemesis Johnny Sorrow and his new Injustice Society. The team is fragmented, and each villain targets a specific hero. Jay Garrick, the original Flash, is confronted by his long thought dead arch-enemy Rival. Count Vertigo seeks revenge against Black Canary who is out on the town with Doc Mid-Nite. Shiv has a score to settle with the Star-Spangled Kid. In the midst of this chaos, a new ally is forged, and Hawkgirl suddenly recalls her past-life as Shiera Hall and her lost love Hawkman. The JSA ends up across the galaxy on Thanagar heralding the return of the winged wonder while they battle the devilish Onimarr Synn. After a brief tour of duty in Our Worlds At War, the team finally settles down with a Thanksgiving dinner with the Justice League only to have it interrupted by global hell as the Seven Deadly Sins are unleashed. This leads to the return of two deadly enemies for both heroic teams.

Geoff Johns was settling comfortably into the JSA during his second and third years. Goyer would continue as a contributor up through issue 50 and is often forgotten when discussions about this series arise. Together, Johns and Goyer explored not just the positive side of legacy superheroics but how the sins of the past can often be visited upon the current generation. This was no more apparent than in Johnny Sorrow, a retroactive invention modern comics writing placed in the past. He was a small-time villain who, after communing with a Lovecraftian entity, becomes a being of cosmic horror. Sorrow has two goals: Usher in the age of the King of Tears on Earth and get revenge on Sand for his role in Sorrow’s defeat in the Golden Age. Sorrow is acutely aware of the role of legacy and stacks his Injustice Society with the descendants of the JSA’s old foes. 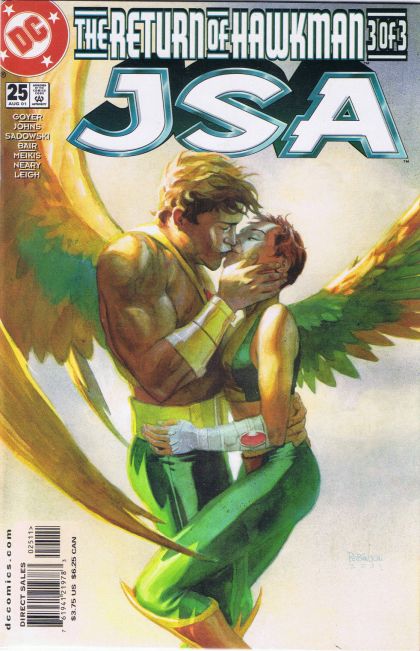 Our writers aren’t daunted by the oftentimes muddled and confusing continuity working with DC legacy characters brings. They happily embrace the convoluted histories and face them like a narrative puzzle that can be sorted out with intelligent writing. Hawkman is the ultimate challenge in this regard, a superhero who has recently been rebooted and still almost impossible for any writer to get straight. The problem comes from the fact that when DC created Earth-2 in the 1960s, a home to its Golden Age characters it did one of two things with each character: 1) Had two distinct characters representing the heroic name on each world (see The Flash, Green Lantern) and 2) Had an exact copy of characters on each Earth, just older on Earth-2 (see Superman, Batman). Hawkman was an odd situation where the main Earth-1 reboot was still Carter Hall, but this time he used that name a false identity. He was, in reality, an alien cop from the planet Thanagar. It worked okay until Crisis occurred in 1985 and rebooted things. DC editorial forgot to send out a memo on the status of the Hawks, so their classic Silver Age version popped up in some comics before they got a proper reboot in the late 1980s via Hawkworld. But questions remained about the numerous errors.

Geoff Johns and David Goyer go back to the Egyptian roots of Hawkman and double down on their unified continuity by making Nabu (creator of the helm of Dr. Fate) and Black Adam advisors to Prince Khufu, the man who would one day reincarnate into Carter Hall. They even pull in the concept that a visitor from Thanagar met the original Hawkman and was so inspired he named his son after the man, Katar Hol so that the alien Hawkman idea gets accounted for. It’s a smart mix of sidestepping the inexplicable and weaving together distant strands. The goal of this second story arc in the collection is to get a classic Hawkman back on the table and in the ranks of the JSA. 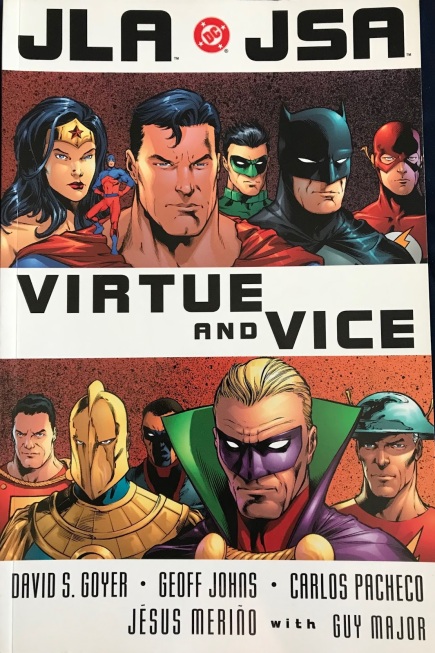 The collection concludes with the prestige one-shot JLA/JSA: Virtue & Vice that hearkens back to the annual crossovers in the pages of Justice League of America. Characters from both teams are paired up in exciting ways, and the Seven Deadly Sins even turns a portion of the team in fun villains. Johns refuses to reinvent the wheel and makes the two core villains deeply important to both sides as well as bringing in locations from the past, like stranding a group in Limbo where the JSA was trapped for decades (an editorial decision in the 1990s to justify why these old timers weren’t present immediately after Crisis rebooted things). Johns had this remarkable talent on JSA of making deep cuts from continuity entirely accessible to new readers. While exercising his plotting muscles, Johns never forgets the core of the book is the characters and the familial relationships they share, exhibiting traits that make Claremont’s early X-Men run so engrossing. This is another volume of this particular reprint series that reminds me why I loved this title and made me yearn for its return among the current DC titles.