Punisher: In the Blood (2011)
Written by Rick Remender
Art by Roland Boschi 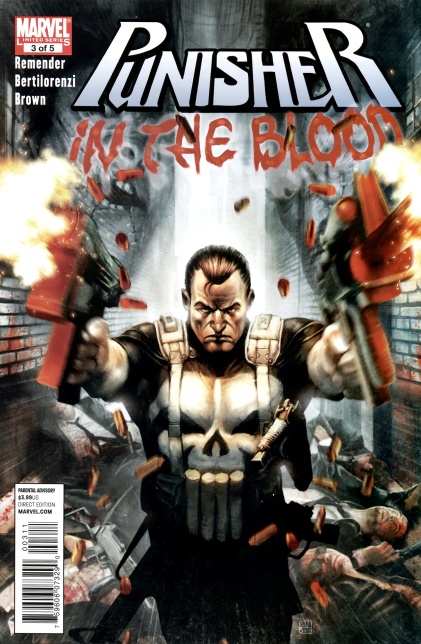 There was one significant loose end left at the end of Remender’s Punisher run: Jigsaw’s paternity of Henry Russo. There’s also the resurrected former sidekick Microchip running around. Moreover, to add to the chaos, a mysterious leather-clad masked woman appears on the scene, and Frank believes this is his wife, brought back from the dead by the Hood, still alive and kicking. Life isn’t going to get comfortable for Marvel’s top vigilante as Remender brings his run on the character to its conclusion.

One of my most significant problems with the Punisher stories I have read since I was a kid was a lack of intimacy between Frank Castle and his enemies. Beyond his origins, Frank’s ongoing battle against crime hasn’t felt like it was personal and so the stories inevitably become cold and machine-like. Remender understands that even a gun-toting vigilante can be an interesting character if the stakes of the stories connect to the personal core of the character. This is why he has The Hood using Frank’s long-dead partner Microchip as one of the significant baddies in his opening arc. Forcing the Punisher to deal with both the physical and emotional toll of these battles will always make for more compelling tales.

Henry Russo is essentially the “Son of the Joker,” the child of The Punisher’s arch-nemesis, Jigsaw. Jigsaw plays the Joker as he is a recurring villain created by the actions of The Punisher, kicked through a plate glass window leaving his face in shreds and needing to be reconstructed. There’s an insanity that weaves through this villain’s actions and a certain edge that made me as a reader feel nervous and tense. By the end In the Blood, we see just how far Jigsaw is willing to go to kill Frank Castle, and this reaffirms his place as the top villain in the hero’s somewhat emaciated rogues gallery.

I am not a regular reader or scholar of The Punisher’s continuity, so I wasn’t quite sure who the blonde man was with Jigsaw when he shows up at Henry’s mom’s house. This is one area where Remender can be a daunting read for someone new. He makes some deep digs into the back history and doesn’t give many contexts so that a new reader could quickly become lost not knowing who certain vital characters are. The blonde man, with a near identical face to Jigsaw, is Stuart Clarke, a former supervillain who became a replacement for Microchip in the early 2000s. The revelation of Maria Castle is one of the weaker points of the story in my opinion, and I had high hopes because I can’t recall reading a Punisher story that dug this deep into the humanity of the character.

Overall, Remender delivered a worthy wrap-up to his Punisher run and produced one of the few story arcs I’ve enjoyed that featured the character. There’s a lot of characters and plot in these five issues, and they feel incredibly exciting as I read. If more writers followed this model for Frank Castle, I could see myself reading his stories more often.