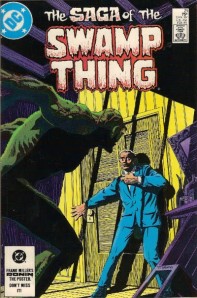 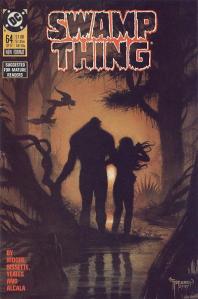 Before Watchmen, Alan Moore was simply known as the guy who saved Swamp Thing from cancellation. The series was born out one story in the horror anthology House of Secrets in the 1970s. The unnamed Swamp Monster proved so popular that creator Len Wein recast the story in the present day and gave the character an origin. He was Dr. Alec Holland, a scientists working in the bayous of Lousiana on a “bio-restorative” formula. Its end purpose would be to turn arid environments into lush forests. His lab is attacked and a fire is started, engulfing Holland. The poor man runs into the waters of the swamp where he dies from the burns, blood loss, and trauma. However, he was coated with the formula during the attack and his essences mixes with the swamps. He is reborn as a plant humanoid, with the memories of Alec Holland. All in all, it wasn’t too spectacular of a series and sales reflected it. That is until the British comics writer Alan Moore said he would taking over writing the series. He was given a handful of issues to turn sales around and that’s just what he did. 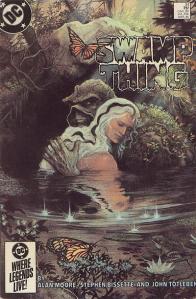 Moore’s first issue (Saga of Swamp Thing #21) is very reader inaccesible, but he had tie up the plot point left by the previous writer and he did so fairly well in one issue, ending with the death of the main character. Odd way to start a run on a series. The next issue is where he really kicks into gear. In this single issue, Moore completely resets the status quo of the series, with Swamp Thing learning he isn’t Alec Holland, but merely a mass of vegetation given sentience by the dying Holland’s consciousness and the formula. Now that Swamp Thing realizes he isn’t human, his behavior becomes increasingly alien. The series itself switches from a standard superhero comic into some mish mash of that and a horror series. Artist Steve Bissette is incredibly effective with his macabre, otherworldly illustrations. The enemies the creature fights from this point are not one who can be defeated through brute force alone, and stories take on a very philosophical bent.

One of the standout issues deals with Swamp Thing’s long running relationship with Abby Cable. Even upon discovering he is not the man she thought he was, Abby refuses to abandon him, seeing goodness in the human nature of his soul. They have sex which is one of the strangest love scenes I guarantee you have ever seen. It involves Swamp Thing growing strange fruit on himself, and Abby eating some. The fruit secretes hallucinogens and cause Abby’s consciousness to leave her body temporarily and merge with the plant life. Its a very clear example of how Moore writes comics in a more intelligent and mature way than most writers. He acknowledges the superhero tropes but he also doesn’t feel constrained by them. On the other hand, he doesn’t see spandex outfits and extraordinary powers as “cheesy” or “lame”. He is a great appreciator of the depth and breadth of comic books. 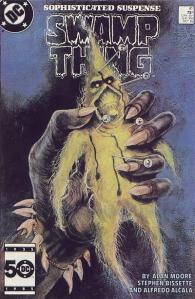 While Saga of Swamp Thing was on the verge of cancellation around issue 30, it went on to run until issue 171, a feat that would have been impossible without Alan Moore’s writing. Moore didn’t change or reinvent comics, he simply wrote them better than they had ever been written before. All the melodrama and soap opera are there, they’re just done in a skilled and crafty way. I particularly remember the inclusion of Golden Age villain Solomon Grundy (familiar if you grew up watching Super Friends). Despite being created forty years apart, Swamp Thing and Grundy had suspiciously similar origins. Moore, being a comic book fan, knew this and made it part of the story. It is such a smart little note of continuity for him to have picked up on and its something that continues to resonate with the Grundy character today. If you are looking for an amazingly literary comic you’ll find no better than Moore’s work on this series.