Continuing my list of favorite films to come out in the 2000s. Wishing I had seen Where the Wild Things Are and The Road before 2010, have a feeling they would have been on this list. 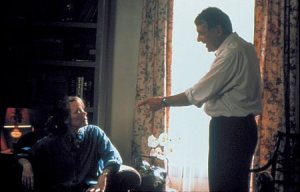 Based on the short story, “Killings” by Andre Dubus, this film shows the first time director’s natural aptitude when it comes to subverting audience expectations. About twice during the film, what the audience assumes it is about switches tracks and by the end we come to the realization that it is about something much deeper and darker than we thought. The story, set in Maine, follows Frank Fowler (Stahl) who is dating recent divorcee Natalie (Tomei). Their relationship is plagued by the presence of Natalie’s obsessive ex, whom Frank’s parents, Matt and Ruth (Wilkinson and Spacek) continuously warm their son about. Tragic events begin to unfold, and they force Matt and Ruth into traveling down some dark paths, which uncovers a lot of deep-seeded animosity in their marriage that has festered for decades.

One of the great film debuts of a future master filmmaker. Director Green (All the Real Girls, Undertow, Pineapple Express) emerged from the American South as an artist with a profound visual and storytelling sense. Though his work may not suit every film goer’s palette, he is unarguably a distinct voice in the film world. This debut picture chronicles, in a lazy dream-like fashion, 12-year old Nasia, a girl growing up in a destitute North Carolina town. Her friend, the eponymous boy of the title, never had his skull fully harden as a baby and lives life being obsessively careful. Events transpire and one of their group of friends is killed by accident, forcing the children into a pact of silence. George responds by styling himself as a superhero and attempting to save lives to make up for the one he is partly responsible for taking. If ever you could film a poem, that would be this film. 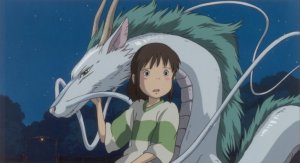 Though released in Japan in 2001, this animated masterpiece didn’t reach general American audiences until 2003. John Lasseter, the driving force behind Pixar, has been the most vocal Miyazaki fan and is responsible for that director’s exposure in the States this decade. Miyazaki possess that rare talent to create contemporary fairy tales, something Disney seems to have lost of the magic of in the late 1990s. This particular film takes the Alice in Wonderland archetype and gives it a twist thanks to Japanese culture. In the same way that Akira Kurosawa took MacBeth and made Ran, so too does Miyazaki make the story his own. Young Chihiro and her parents are moving to a new town when they are sidetracked by a mysterious tunnel. They emerge on the other side in a mysterious spirit world, where Chihiro must work for a witch whom runs a spa for ghosts. A beautiful work of art that will have you gasping about the impossibility of such a gorgeous film being able to exist. 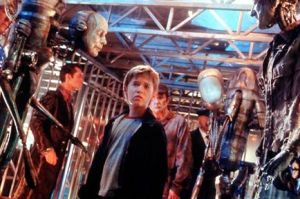 This is a film that I assume will not end up on most critics top of the decade lists. However, it affected me in an incredible strong, emotional way for multiple viewings. Though it was directed by Spielberg, it was originally in development under the late Stanley Kubrick, and its still possible to see his faint brushstrokes show through the more fantastical and superficially allegorical nature of Spielberg’s aesthetics. The story, adapted from Brian Aldiss’ short “Super-Toys Last All Summer Long”, is derived more from the Pinocchio tale. Some time at an undisclosed point in the future, a young couple adopts a robot boy (Osment) as a replacement for their comatose son. Once the son is cured, David, the robot, is tossed aside and begins an odyssey to become a real boy which he believes will make his “mother” love him. The film was a box office disaster but I like to think that was because of the expectations movie goers have for summer pics and in particular Spielberg movies. This film contains such a profound sadness to it, it is not meant to provide escape but rather reflection. 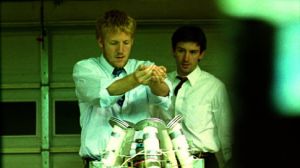 Probably the cheapest budget of any film on this list, Primer was made for an astonishing $7,000. Written, directed, and starring a group of friends in Dallas, Texas, Primer is the most realistic time travel story I have ever seen. Director Carruth proudly explained in interviews at the time that an effort was made not to dumb things down for the audience but present a system of time travel that was as close of scientifically sound as possible. The film can be mind boggling during the first viewing, but after successive viewings all of the time jumping becomes a lot easier to understand. The look of the film is more akin to a documentary than a big budget film and the story is as well. If you are looking for a challenging picture that doesn’t feel the need to spoon feed you story then you would love this film.