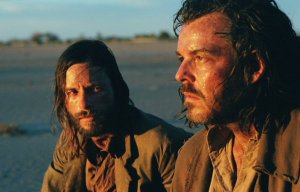 In the late 19th century, Australia was experiencing a parallel to the United States era of lawlessness in the West. The continent down under was being civilized by the British Empire and numerous clashes with the descendants of those imprisoned there earlier occurred. This particular story, scripted by acclaimed musician Nick Cave, tells the tale of Charlie Burns (Pearce), a man torn between his love for his younger brother and the loyalty to his older, sociopathic brother (Huston). The life of Charlie’s younger brother is what is at stake, when British Captain Stanley (Winstone) tells Charlie he must bring in the elder Burns brother to atone for the horrific murder/rape of a settlement family. The film has a dreamlike quality, with long patches of meditative views of the Outback. It evokes an otherworldly, mystical feel the land seems to possess. Hilcoat and Cave manage to convince that their is much fertile ground for more of the Western genre in Australia.

Talk about a strong debut film. Johnson mixes equal parts hard boiled detective story, Leone spaghetti Western, and Lynchian suburb creepiness and creates a fresh blend of all three. The log-line for this flick could simply be “Dashiel Hammett writes a high school movie”. The dialogue is lightning quick and full of anachronistic slang that intentionally confounds a bit at first. Brendan (Levitt), is a high school student in an unnamed California town. He receives a disconcerting phone call from his ex-girlfriend (de Ravin) late one night and this pushes him into the middle of a murder mystery. The characters are all archetypal from stories like The Maltese Falcon and The Long Goodbye, but re-imagined in inventive, clever ways. And while the film has a very wry sense of humor, it contains a serious thru line that delivers a punch to the gut in the finale.

This is a film that I feel certain will be lost a bit in the coming decades, but one I hope to keep some people aware of when I can. Another piece of Australian cinema, the setting here are the 1930s, during a period known as The Stolen Generations. At the time, the Australian government was literally trying to breed the Aborigine people out of existence. Three young girls are kidnapped from their home in Jigalong Village (Northern Australia) and taken to the Moore River settlement (Southwest), where they were to be retrained into basically becoming a servant class. The girls escape and begin to make the 1,500 mile journey back home. Based on the true story of author Doris Pilkington Garimara’s mother, Rabbit-Proof Fence is a beautiful story of the drive of three children to get back home no matter the brutal conditions around them and, simultaneously, a condemnation on a period of history the Australian government would like to ignore.

The screen crackles with this film. Music video director Glazer uses a camera like dynamite, present images you want to frame and put up on the wall. You can feel the broiling heat of the opening sequence like you were there. The story follows Gal (Winstone), a retired British safecracker who has relocated to Spain with his wife. Their idyllic life is interrupted by the arrival of Don Logan (Kingsley) who has a big job and needs Gal for it. Gal declines but Logan is like a yapping rat dog who doesn’t let up on Gal for a second. Kingsley defines “ferocious” in this performance. I’m sometimes confused by his choice of roles (see Thunderbirds or Bloodrayne), but pictures like this remind me how damn good he is. Everything is magnified to the level of brilliance by Glazer’s deft directorial hand. The only downside is that the genius director only managed to produce two films during the decade (Birth) and has his audience salivating for more.

Writer Charlie Kaufman had a very good decade. Of his scripts, he had Human Nature, Adaptation, Confessions of a Dangerous Mind, Eternal Sunshine of the Spotless Mind, and this feature released. A pretty amazing track record. This feels like the most psychologically personal of all his works, with Adaptation being the closest we had been to Kaufman’s psyche before. Caden Cotard (Hoffman)is in the middle of staging a new play when he learns he has cancer. Having recently received a genius grant to develop a new work, Caden feels spurred on by his sickness. He rents out a warehouse and begins building a recreation of the city around him, Schenectady. The production grows to gargantuan proportions and Caden’s real life becomes more and more neglected. The film is one large nesting doll, in which one artifice contains another which contains yet another. Kaufman stretches and dissolves the boundaries of identity and reality, with Caden even assuming the role of another person in the latter half of the film.