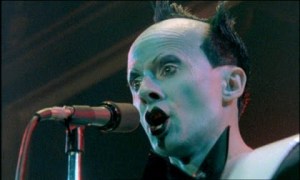 In 1963, author Walter Tevis wrote the novel The Man Who Fell to Earth, and 13 years later David Bowie starred in the film adaptation. Little did anyone realize that the premise of the story: an alien being appears out of nowhere and goes on to achieve fame before dying prematurely was to be copied by a fellow Earthling who would lose his identity in the alien persona. Nomi’s story was much like the operas he loved, very beautiful at its heights, but destined to end in tragedy.

Born Klaus Sperber in Bavaria in 1944, the film really only focuses on his days in New York City in the late 1970s when his career as a New Wave artist occurred and ultimately ended in death. There is wonderful archival footage provided, albeit very low quality, but have footage of performances in the East Village at its cultural height is a treat. The Nomi persona came from the mind of Klaus who combined elements of his native German cabaret, classical opera, Japanese kabuki makeup, and retro 50s futurism. This melange of concepts worked together perfectly, and his set lists would consist of 1930s pop songs, 1960s pop, and his own otherworldly inspired tunes. But what truly made him such a unique act was the mastery of his voice, singing in both a tenor and counter-tenor/falsetto.

The man behind the cleverly designed persona was a conflicting mix and seemed to become much colder and distant as he became more popular. Nomi possessed an androgyny that one interviewee describes as more than sexual, but a removal from normal human emotion. He truly behaved like the alien or robot he pretended to be. There are candid moments caught on film when that fades away. On particular scene involves his appearance in a local access music show in NYC where, instead of singing, he showed off his second talent, making cakes and pies. There are also stories from his back up band and friends of how he hungered for fame, at his heart he wanted to be an opera diva.

Nomi also hungered for companionship, but even his persona was viewed as outsider one to the gay community in the late 1970s. They loved what he did but it seemed that his alien nature made it hard for any man to find him sexually attractive. Friends report in the documentary about his proclivity to go “cruising” and they warned him about the potential for disease by doing this. In the early 1980s, after beginning to compromise his work to be able to put out a marketable album, Nomi discovered strange lesions on his arm and was taking an increasing amount of antibiotics to stay healthy. He was eventually diagnosed with what was called at the time “gay cancer”, more commonly known as AIDs. His final months were sad, as he had turned his back on bandmates earlier and sought out any one who would show him compassion.

While the documentary does an excellent job of telling the story of Nomi’s musical career. However, I found myself wanting to know more about Klaus Sperber and how this young man from Germany developed this psychological mindset. What was the appeal of the idea of retreating into the alien persona? It seems that a lack of companionship fueled but how did it begin. This is an excellent documentary and can be viewed for free on Hulu.