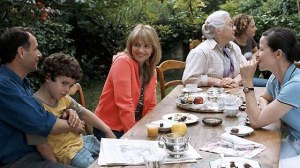 It’s always refreshing to see a film made for grown ups. Too often American dramas dumb things down, maybe out of a lack of talent in the writer or maybe a lack of confidence in the audience’s intelligence. Here director Assayas looks at the strange dynamic of being both the adult child of a parent and a parent to your own children. In one position you are still looked on as an infant or adolescent and in the other you are the supreme authority. This difficult place is used to examine how we deal with death and responsibilities placed on us by the dead. The whole thing is a very naturalistic, quiet piece of cinema that is rewarding and ambiguous. The answers we receive will be as open ended as the characters in the film, and like them, we have to learn to happy with that.

Helene has just turned seventy-five and has come to terms with the fact that her life is coming to an end. She takes her eldest child, Frederic aside and explains to him how the family’s vast art collection and the country home they grew up in is something she wants him to maintain and make sure her grandchildren can bring their children to. Helene dies soon after her children make their last visit to the house, all of them caught up in busy lives: Frederic in Paris, Adrienne in America, and Jeremie in China. Frederic comes together with the siblings who all want to sell off the artwork and the house as they don’t have the funds or time to maintain the property. Frederic concedes and they go about cataloging the contents of the home. Frederic maintains a sense of guilt as he watches the promise to his mother fade away.

Summer Hours is a film that will demonstrate how programmed you have become by cliched Hollywood plot devices. There is a never chance anything of major conflict with occur, no one is going to explode in an emotional rage and there will be no ironic twist of fate. This is a very relaxed film about a family and the compromises we all make as a part of families. Frederic never really puts up a fight and its hard to be angry at him. As much as his mother loved the collection her uncle had amassed and she inherited, it is almost impossible for her children to maintain it. What is interesting is how Frederic’s teenaged daughter, Sylvie feels a strong emotional connection to the country house. The opening scene is of her and her little cousins running through the woods, playing, being children. The final parallels this, but with a more bittersweet tone as it is the last time she will be there.

This is not a film that has a message for you. Assayas simply tells the story of these three adult siblings, lives without melodrama, dealing with the aftermath of the death of a parent. What you are meant to get out of the film is what ever you want. So often in American mainstream cinema scripts are locked into formulaic beats and its all about hitting certain plot notes by certain page numbers. Here no one is rushed along, no one reveals some deep dark secret. Its very refreshing, and beautiful, and ultimately stays with you a lot longer than a script that sloppily goes didactic. If you are looking for an incredibly thoughtful film that lets you decide what you want it to mean, then I think you’ll be in for a treat with this one.