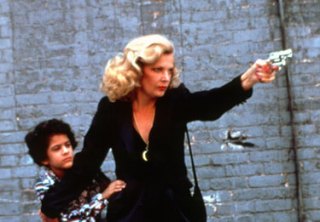 One of the few aspects of Cassavetes’ films that kept his work from falling into self-indulgent tripe was his muse and wife, Gena Rowlands. Rowlands regularly grounds the films she appears in with performances that challenge typical ideas about women. She’s just one of those actresses that its a joy to sit back and watch work. And here, in Gloria, she was given a larger commercial venue to display her skill. And it was thanks to Rowlands that Cassavetes directed this film in the first place. Cassavetes has originally just written the screenplay and sold it to Columbia Pictures, after which Rowlands was cast in the lead. She highly recommended her husband to direct his own script and he was hired.

The story follows the titular Gloria (Rowlands), a woman who grew up around mob types and has the hard exterior to match. She ends up in the custody of young boy (Adames) whose mob accountant father and family are murdered. Gloria uses her mob connections to try and negotiate she and the boy’s freedom from the endless pursuits. Along the way, Gloria clashes with her young charge, leaves him to fend for himself, but eventually chases back after him. Like the majority of Cassavetes’ movies, this is about a character, not necessarily the plot.

Unlike most of Cassavetes movies, this doesn’t have the ploddingly dull feel to it. The pace is very well done and some thing is always happening. Add to that Rowlands, who gives great performances every time and you have a film that actually had a bit of a commercial life. In fact, the premise of this film would be the basis for Luc Besson’s Leon about a decade later.What enjoyed most about this picture was, how the premise could easily have been maudlin crap, but Rowlands never lets her character fall for any “maternal instinct” nonsense. She has enjoyed a life unmarried without a children, and just because she is with this young boy she isn’t going to start treating him like her son. Even in the film’s conclusion we’re shown that she will not change who she is and is going to talk to this child like an adult.

Next up: Love Streams