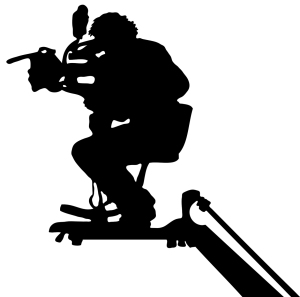 Thanks to Netflix I have had much more access to documentaries and have enjoyed enough that I didn’t want any to be buried by the narrative features. So starting this year, I will do a separate top 10 list for these amazing docs. Tomorrow, I’ll look at my favorite tv from the first half of the year.

10. Tell Them Who You Are (2004, dir. Mark Wexler)
Cinematographer Haskell Wexler is revered in Hollywood for his work on such films as Who’s Afraid of Virgina Woolf?, One Flew Over the Cuckoo’s Nest, and many other counter culture films of the 60s and 70s. This doc allows us to get uncomfortably close view of Haskell’s horrible relationship with his son (and fellow cinematographer), Mark. Unlike Haskell, who is a proud bleeding heart liberal, Mark has rebelled by working for the Man, the Man in this case being the Bush Administration as a cinematographer for videos about Air Force One.  As a liberal myself, it was quite an intellectual challenge to observe Haskell, a man with whom I agree with down the line politically, revealed as such a horrible man to his son. He goes so far as to refuse to sign consent forms to use the footage of him unless he gets to have a say in the editing. There are moments in this film that will make you physically cringe.

9. Obscene (2007, dir. Daniel O’Conner and Neil Ortenberg)
Barney Rosset was the owner of Grove Press and publisher of Evergreen Review, whose work in the field of free speech rocked the nation in the 1960s. This documentary chronicles both his personal and public life, working to get Lady Chatterly’s Lover and Tropic of Cancer uncensored and in the hands of the readers. Simultaneously, he has a rocky marriage and suffers financial collapse as his staff revolts around him. Interestingly enough, Rossett was best friends with Haskell Wexler when they attended the progressive New School in the 1930s. This, along with  Tell Them Who You Are are challenging films, especially to liberals like myself. You really have to decide if you can separate the public persona from the private human being. Its also a reminder that as much as we search for Christ figures in our culture, it will never happen. A flawless person is just a myth, and maybe perfection means having virtue and vice side by side.

8. Marwencol (2010, dir. Jeff Malmberg)
In 2000, Mark Hogencamp, a resident of upstate New York, was beaten to near death by five men outside a bar. After nine days in a coma, and a hospital stay of 40 days total, Mark was released with severe and permanent brain damage. Mark had no health insurance, and thus no way to receive therapy for his condition. As if in a subconscious understanding of his condition, Mark begins to construct a WWII era Belgian village in his backyard and populates with old fashioned GI Joe and Barbie type dolls. Out of this his creates a parallel reality to the one he experiences day to day. Whereas in the real world, Mark has found it impossible to communicate with women, his plastic avatar in Marwencol is a war hero with a long series of lovers. Marwencol is one of those astounding films that changes you by the end.

7. I Like Killing Flies (2004, dir. Matt Mahurin)
For 30 years in the East Village, Kenny Shopshin ran Shopshin’s, a quirky restaurant that did everything against conventional business “wisdom”. Kenny has around 900 different items on his menu, he won’t allow parties of more than five and he’ll throw out if you challenge him on this, if you are in his store you have to eat (no just getting a cup of coffee), and if he just doesn’t like the look of you he’ll toss you out. Kenny is a neurotic philosopher, loving husband, and father of half a dozen kids. The doc follows Kenny as he’s forced out of his lease and deals with major changes in his life. Kenny is one of those singular human beings that is so caustic you end up being drawn to them.

6. The Art of the Steal (2009, dir. Don Argott)
The story of Albert C. Barnes is a relevant one in our current times when the balance of power between the citizen and government or conglomerate is out of whack. From blue collar beginnings, Dr. Barnes became rich through his invention of a surgical antiseptic and went on to self teach himself about art, particularly modern art. He purchased tons of it, but after a critically trashed showing of it in Philadelphia by the city’s art elite, so he carted it away to his estate where he controlled how the public got to view it. For the rest of his life he fought the city legislators who suddenly realized the economic boon having Barnes’ collection in a downtown museum would have for Philly. Upon his death, they slowly whittle away at the board of directors overseeing the collection until they can get it. And that is when the fight begins.

5. Gasland (2010, dir. Josh Fox)
Josh Fox is a documentary filmmaker whose life became the subject of this picture. In rural Pennsylvania, a natural gas boom is occurring, and one company wanting to get at the deposits under Fox’s family’s land offered to lease the property from him. Fox begins an odyssey across the country to see what has become of the places where “fracking” (the term for the injection of hundreds of toxic chemicals in to the earth to get the gas out) has been happening. He finds a trail of destruction, the most common theme being the destruction of ground water. Residents of rural mid-America show tap water the is flammable out of the faucet and energy corps that have no interest in helping change their practices. During this crux in the history of our energy consumption, this is a very important doc that reminds us that we must precede with caution, lest we do more damage.

4. Gonzo: The Life and Work of Dr. Hunter S. Thompson (2008, dir. Alex Gibney)
If you don’t know who Hunter S. Thompson you’re deprived of one of the core figures of the 1960s-70s counter culture movement. The journalist who brought us Fear and Loathing in Las Vegas among many other, and probably more significant texts, was truly an enigma. Watching him in numerous pieces of archive footage and hearing friends talk about him he comes across as the most genuine and honest people probably every involved in journalism. He never seemed afraid to make very personal and digging comments against people in the political sphere whom mainstream journalism played the game with.

3. Client 9: The Rise and Fall of Eliot Spitzer (2010, dir. Alex Gibney)
The story of Eliot Spitzer is the story of every person who seeks to challenge the corrupted free market capitalists of America. The message? We will destroy you. Spitzer comes across a very focused professional, who would often go a little overboard and step outside the boundaries of his office of attorney general of New York. It makes it even worse when the employees of the escort service Spitzer used confess that he didn’t seem to enjoy a second of his time with them, constantly worrying about being caught. The truly disturbing facts of the story come out when its revealed FBI agents were threatening escorts with imprisonment if they didn’t divulge customers IDs. This happens as Spitzer is simultaneously moving closer to getting access to AIG’s private bookkeeping. It’s a tragedy that Spitzer’s name was turned to mud based on something that had no criminal charges connected to it. What makes it worse is the gloating of AIG execs who practically admit they put private investigators on Spitzer to dig up some dirt.

2. The Most Dangerous Man in America: Daniel Ellsberg and the Pentagon Papers (2009, dir. Judith Ehrlich and Rock Goldsmith)
In a time where Wikileaks is being slandered left and right, and Lt. Bradley Manning is being tortured under the euphemism of “suicide watch” , its hard to believe there was an employee of the Pentagon that was a national hero for making public that which the government wanted desperately to keep secret; that Vietnam was a massive fuck up. Daniel Ellsberg was a military analyst employed by (the ominously named) RAND Corporation to prepare reports for the Defense Department. While going through the data and accounts of what was happening in Vietnam, Ellsberg sees the larger story, that American soldiers are dying in a war our government acknowledges was all sound and fury. In spite of the danger to his livelihood and life he gets the documents to major newspapers and congressmen opposing the war. The result is that Nixon makes him enemy number one and forms the “White House Plumbers”, his gang of thugs who would go on to perpetrate the Watergate break in.

1. The Tillman Story (2010, dir. Amir Bar-Lev)
If any event in the post-9/11 era sums up the state our nation its the tragedy of Pat Tillman. Tillman was an NFL defensive back who played for the Arizona Cardinals up to the 2001 season. In the wake of 9/11, Pat and his brother signed up to join the war in Afghanistan. As the documentary makes clear, the Pentagon saw this as a wonderful PR moment; Sports hero turned war hero. However, something went wrong during an operation near the Pakistan border and Tillman ends up dead. Reported first as an attack by hostiles, Tillman’s mother learns her son was killed by friendly fire. The film is part whodunit and part dirge on the state of media as a tool of government to control the citizens’ views on policy. The Tillman Story is one of the most important films to have come out of the deluge of War on Terrorism docs and you would be doing yourself a disservice not to seek it out.