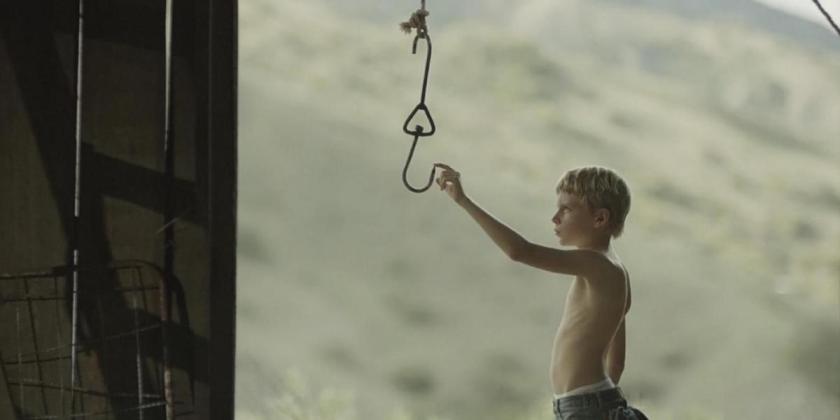 As someone who works with children approximately the age of the title character, watching The Boy is a very interesting experience. It’s fairly well known that during the Victorian Period, the cultural perceptions of childhood changed. Prior, children were seen as small adults and their exposure to hardship and cruelties of life was seen as the norm. In the late 19th century, social justice groups began to criticize the harsh conditions that children were forced to endure and demanded better. Childhood was now seen as a precious, fragile time for these angelic beings to develop. Even Peter Pan was born out of this mode of thinking, along with a myriad of literature aimed at children that approached its material from a place of gentleness. Craig Macneil’s The Boy attempts a character study focused on questions surrounding what happens to a child who has to live through the aforementioned brutality.

Set in 1989, The Boy points its watchful eye on Ted (played with remarkable coldness by Jared Breeze). Ted has grown up at the Mt. Vista Motel, located in some lonely corner of the American Southwest. Ted spends his days collecting roadkill for quarters and wandering the brush around the property. One rainy night, Ted causes a car crash that brings Colby (Rainn Wilson) to the motel for an indeterminate time. Colby is a mysterious figure who avoids the hospital and the local law and this intrigues Ted. At the same time, an anger is growing in Ted that troubles his father (David Morse) and is leading to a violent conclusion.

This is mostly definitely a character study and eschews any sort of heavy plotting towards that style of film making. The camera lingers on Ted and we intentionally view long moments of mundane wandering. As a result, the horror of the film is amplified by the slow burn. I would understand if a viewer became massively frustrated in the first half of the film because it does take its time putting all its pieces in place. Ted’s sociopathy is hinted at and I found myself questioning if there was anything wrong with him, if instead of being mentally ill he was simply a child who was working through feelings of confusion and alienation. The finale of the film removes any doubts yet still holds our lead character in a gray space where his actions could be viewed as justifiable revenge in the mind of an abused child.

The standout aspect of The Boy is the acting. When plot is secondary, a director must have a cast that can develop their characters in organic ways. Jared Breeze is so convincingly cold and distant as Ted, and brings out pathos and emotion only when absolutely necessary. It is incredibly unsettling how well this young actor brings out the complicated psyche of Ted. David Morse and Rainn Wilson, the actors who share the most screen time with Jared, both deliver subtle and powerful performances. Morse, a character actor whose face you know already, is pathetic and infuriating as Ted’s father. He lived the same life as Ted, raised by his father at the motel and admits he doesn’t want this life for his son, but an invisible guilt appears to shackle the patriarch to this place. Even more interesting is Rainn Wilson as the mysterious Colby. We never quite get the gritty details of Colby’s past but so much can be inferred by what we are told. He desperately doesn’t want the police to search his damaged car in the local junkyard and his kinship with Ted is left open for interpretation. Is he actually developing the fatherly relationship the boy doesn’t have with his actual dad? Or is Colby just using the boy to process his own guilt about his past crimes?

The Boy is an incredibly dry and slow film. Don’t expect a campy melodrama pastiche of Psycho despite the setting and themes. The film traffics in one of my favorite element of great art: ambiguity. Lots of questions are left on the table. We never really know “Why?”. And that is okay. So often that’s the question we’re left with in real life, in the wake of tragic violence committed by the grown men Ted might grow up to be. Here, we are allowed a microscope to examine the birth of such evil in detail. What we learn is that the origins of darkness in the soul are more complicated than we would like to think.