Of the four titles, this felt the least like the beginning of something new, or the reintroduction of some element from DC Comics past. The story focuses on the Pre-New 52 Superman and Lana Lang unearthing the recently deceased Superman’s ashes. Lana made a promise that if he died before her, she would make sure his remains were with his adopted parents, The Kents, in Smallville. The two characters talk about old Superman’s experience with death and rebirth, and he’s pretty insistent this world’s Superman is going to be reborn eventually. It comes across a little meta-contextual about the silly nature of death and rebirth in comics.

The story feels like an epilogue to the previous Superman story arc, rather than the beginning of something new and interesting. There’s never an effort made to establish what made the dead Superman such a great hero or why the old Superman is a great replacement. The story keeps things simple but didn’t do anything to get me excited about the large range of directions the Super-titles are going this summer. 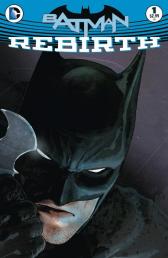 This was much more interesting and fresh than Superman: Rebirth. Tom King is able to reinvigorate some elements of the Batman mythos. The most stark change is to Calendar Man, a jokey gimmick whose crimes revolved around the seasons or holidays. Now Calendar Man is like Cronenberg body horror, his body shedding its entire skin seasonally. The best Batman villains are ones that unsettle us. With the whole Batman concept being so deeply embedded in human psychology, having horrors that poke around and disturb our minds is when the series shines.

The issues also brings in Duke Thomas, formerly of We Are…Robin. In that series Duke was part of a group of young people who adopted the Robin moniker and iconography to fight street crime. Duke responds to an invite from Batman and the two form what is much more of a mutual partnership rather than a lead hero/sidekick dynamic. Thomas gets a new costume, but no codename established yet. Batman: Rebirth is more about tone setting than plot development. It give a very clear sense of what Batman in the Rebirth period will be

What this issue has going for it are two very underdeveloped characters. Simon Baz was introduced in 2012 but fell off into obscurity after a year. Jessica Cruz was introduced a year ago as Power Ring, the host to an otherworldly evil. In last week’s Justice League #50, she shook off her possession and was rewarded with Green Lantern ring. The two leads are used to emphasize the GLs as space cops, with a very reluctant and combative partnership.

It’s difficult to tell here what Sam Humphries brings to the table because so much of this reads like classic Geoff Johns GL storytelling.There is a lot of plot setup: reveal that the Guardians of the Universe have a super secret ring, references to the Dominators and the Manhunters, and some GL history dropped. Other than the characters, this doesn’t feel like much new. It feels like a return to the Johns era GL stories that started back in 2005 until he left the title in 2013. There’s an effort to set up the Hal Jordan & The Green Lantern Corps series as well. I am looking forward to seeing more of our two leads but not sure about the rest. 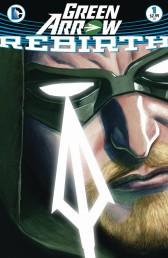 Of the four Rebirth one-shots, this one felt like the best blend of a fresh style of writing while incorporating classic DC elements. The classic element is front in center in the form of a rekindling of the relationship between Green Arrow and Black Canary. There’s fun banter back and forth between these two and that makes the book. It’s also a done in one story, while the other Rebirth titles are just setting up their core titles.

What’s also interesting is how Green Arrow’s Seattle is fleshed out here. We’re given a very creepy, sinister underworld populated by tree house villages of homeless people and sewer dwelling Nosferatu-like creatures. I’m hoping Percy continues exploring this darker side. I was also unaware that Percy had already been writing Arrow for the last year. This one-shot now has me wanting to go back and explore that year of work.