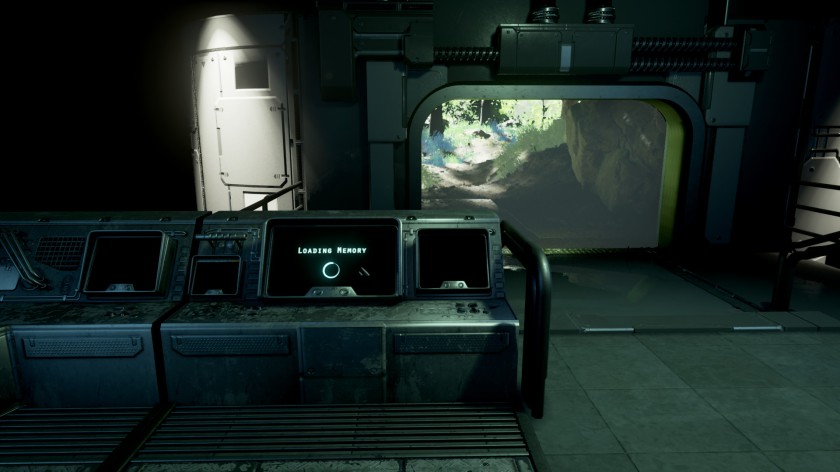 You’re immediately greeted by the sound of alarms and a computerized voice issuing warnings. As your vision goes from dark to blurry to focused you find yourself a dimly lit, cold metal chamber. A console sits in front of you, a room resembling Next Generation’s holodeck beyond that. This is the stage set for Asemblance, a game in the walking simulator genre that is heavily influenced by the mechanics and gameplay of P.T.

And like P.T., who you are is a big question. It would be easy to assume you’re the scientist who built all this equipment, the same scientist where the virtual memory simulations were harvested from. But the game is a mystery without clear answers. The first memory the computer allows you access to is a simple walk in the woods where you saw a butterfly. That butterfly serves as a motif through all the memories though it is not so easy to spot as in the first. The game is fairly small, only four memory files can be accessed in total. There are multiple endings though and each ending sheds light on different parts of the overall mystery.

During my own playthrough I found it became important to pay attention every single detail, no matter how significant. The contents of memos spread across office desks or placement and absence of framed photos were crucial in uncovering and progressing the story. The graphics are not spectacular. They are attempting to reproduce the near photo realism of P.T. but have some muddied textures and are rough around the edges. The biggest problem is the pacing of reveals. Early on you uncover one secret after the other and then suddenly there’s a wall. I spent an hour or so wandering back and forth between memories trying to figure out the next step. This is where those minor details play a crucial role.

The developer has said they see this as a potential anthology franchise, along the lines of the brilliant Black Mirror series. With some more polish I would be all in on something in that style. I’m personally a very big fan of the P.T. style of gameplay, particularly because I see good horror not as something where the protagonist can successfully fight back, but where exploration of the horror is encouraged and stepping into darkness is inevitable. Asemblance doesn’t break new ground but it provides a decent story and the promise of interesting things down the road.