As we get older, we’re told our views on life will change. That is a somewhat accurate assessment I’ve found. However, as I was told by older people I would become more conservative in my thinking as I aged, I discovered the opposite to be true, at least in the sense they implied. One thing I have become very conservative about is the act of war, conservative in the sense I abhor it. I find people who have a war hawkishness about them to be very liberal about the deployment of soldiers and the dropping of bombs. I am thankful that I have never had to personally experience war and have great sympathy for those who have taken lives and had lives taken from them. I cannot fathom the trauma a person carries with them in the wake of that experience. Come and See is possibly the best war film ever made in my opinion because it is directly about that trauma.

Come and See tells the story of Flyora, a Belarusian teen who gets caught up in the partisan resistance against Nazi invaders during World War II. The film is dreamlike and doesn’t have a plot beyond the camera following this young man through very truthfully realized horrors of war. In fact, I would categorize this as not just a war film but a horror film. The way the Nazis presence is hinted at and then finally revealed feels like the unveiling of a terrible monster. The build up is very slow, and we get a sense of hope at the start. Flyora is eager to join the partisans despite his mother’s protestations against it. He arrives at the partisan camp in the woods and maintains that sense of wonder up to the point the woods are bombed, and he ends up alone except for a young girl named Glasha. The two eventually wander out of the woods, and this is where the film descends into utter horror.

Arriving at Flyora’s home, they find everyone missing, and he insists they are just out. The sound of buzzing flies grates on them both, and they try to eat the stew that appears to have been sitting on the table for days. They both vomit and Flyora claims he knows where they must have gone. The Steadicam glides after the pair, Flyora still clinging to hope and taking the lead. Glasha hangs back, and the camera follows her gaze as she turns to look at the cabin behind them. Stacked up on the other side of the wall where they sat eating are the corpses of dozens of townspeople. After slogging through a bog, she finally breaks down, and Flyora refuses to hear this lashing out at her. He’s stopped when survivors from his town come upon them. In grief, he shaves his head and eventually takes off with a trio of other men to find food. This leads to the final hour of the film which is one of the most nightmarish sequences I’ve seen in a film. 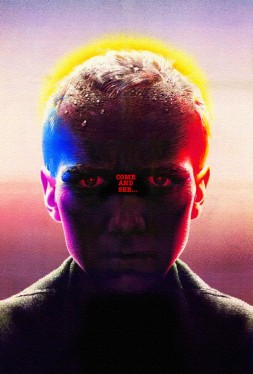 Come and See was inspired by Klimov’s reading of I Am From a Burning Village, a book that the collected the first-hand accounts of survivors of the Dirlewanger Brigade, a division of the SS, who systematically slaughtered Belarusian villages across the countryside. The 40th anniversary of the Soviet Union’s victory over the Nazis was approaching at the time Klimov decided to make this film. It met with pushback from Soviet officials due to their fear of it being propaganda for a more naturalistic style of art that the Party opposed. Somehow, Klimov was able to go into production without compromising a single thing about his script. The only change was the title. Originally it was to be called “Kill Hitler,” but was changed to a reference from the Book of Revelation: “And when he had opened the fourth seal, I heard the voice of the fourth beast say, Come and see! And I looked, and behold a pale horse: and his name that sat on him was Death, and Hell followed with him. And power was given unto them over the fourth part of the earth, to kill with sword, and with hunger, and with death, and with the beasts of the earth.”

The original title sticks out to me as a bit of subversion. The film does nothing to make Nazis look good at all. As I said before, the final hour is just an unrelenting assault of horror and brutality. However, the final scene has Flyora, visually broken and the actor’s hair having even turned gray during the production from trauma, aiming his gun at the camera. A reverse shot shows a portrait of Hitler that the Nazis had carried into the village while proclaiming their leader a “liberator.” Flyora begins to fire into the picture, and with each shot, we cut to historical footage of Hitler moving in reverse. The footage starts with 1943 and moves backward in time with each shot. All the while, images emphasize Hitler and the youth of German. Eventually, it even goes back to grainy images of a young Hitler as a German soldier. Then back even further until in the mind’s eye of Flyora, he sees a portrait of Hitler sitting on the lap of his mother and the boy stops firing. His reaction is a silent, horrified realization. This happens around the same time a young boy wearing oversized partisan clothing is called over by one of the leaders as “Newcomer.” At the beginning of the film, this was the same name Flyora had been called over and over again.

My personal reading of this film is that it seeks to tell the story of how children are devoured by the machine of war. How every soldier you see, grizzled, grayed, and seemingly heartless has been transformed that way by the act of war. Flyora and a friend are joyous to dig up the body of a dead German and recover his rifle at the start of the film. The soundtrack undercuts their joy with a sense of foreboding as if some dark artifact has been brought out of a cursed tomb. Come and See is not an easy film to watch, but why should a film about war be easy to watch. Taking up arms against your fellow man is not light fare and when it is treated as fun and an adventure is disrespects the sacrifices of soldiers and young people like Flyora. Come and See may not be a film for you, but it is a film I am so glad exists. It tells its story in an unflinching way, and it makes sure we understand that the hate that came out of World War II is not something isolated to Nazis. These are atrocities one group of humans committed against another and that searching out the real roots of this horror is an essential duty of every one of us.