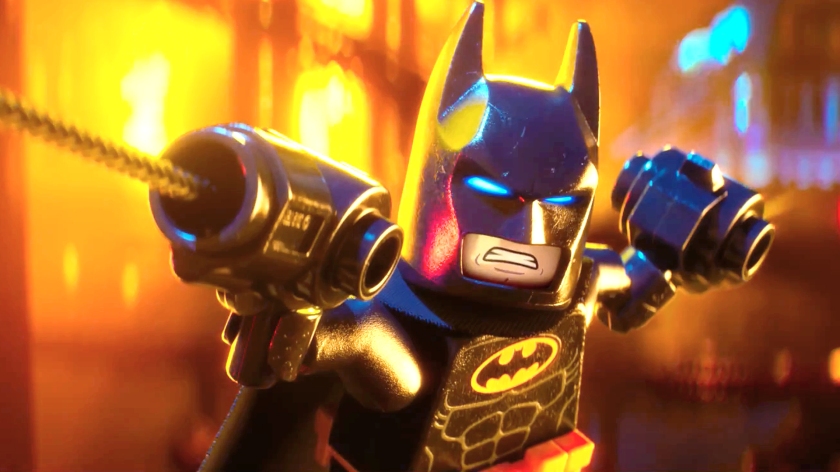 Batman (Will Arnett) is living the life. He fights villains every night, drives and flies around in amazing machines, and hangs out in his comically huge mansion. Everything changes at Commissioner Gordon’s retirement party when the new police boss has plans to phase Batman out of the picture. Bats also meets orphan Richard Grayson (Michael Cera) who, through a series of misunderstandings, ends up Bruce Wayne’s adopted son. Alfred the butler (Ralph Fiennes) is concerned about his employer’s lack of personal relationships and hopes Grayson can remedy that. Meanwhile, the Joker (Zach Galifianakis) has big plans to solidify his reputation as Batman’s greatest enemy.

These days seeing a film based on a character-less property isn’t too strange (Angry Birds the Movie, The Emoji Movie) and it is pretty sure to say that The Lego Movie’s success was the reason why other studios are going to these types of films. Instead of just putting out a direct sequel, Warner Brothers decided to make Will Arnett’s pompous, bad ass take on Batman from The Lego Movie and focus a film around that. The result, much like the original Lego film, is a brilliant and funny family film.

In 2015’s Batman v Superman, the film opens with yet another version of the iconic death of the Waynes, the event that pushed young Bruce Wayne down the path of becoming a vigilante. Where Zack Snyder emphasizes the dour, bleakness of this moment The Lego Batman Movie decides to poke fun at the brooding loner the Dark Knight has become. Batman adheres to his “no ‘ships” policy so vehemently that he leaves The Joker in tears after refusing to agree to this rogue being his “greatest enemy,” insisting that it’s Superman instead. In fact, this film makes direct references to every single Batman appearance in film and television all the way back to the 1940s serials that featured the Batman with the floppy ears. There’s never quite been a Batman film that is so reverent towards its source material while enjoying poking fun at the history as well.

It seems impossible that an entire feature film could be based around a seemingly single joke from The Lego Movie: Batman is an arrogant prick. Yet, the writers spin a hyper-meta-commentary on the entire concept of Batman over the last 90 years. I can’t quite remember any piece of media that so dissects the lore and idea of a favorite fictional figure like this. Guy Ritchie’s Sherlock Holmes plays a bit in this territory and Gore Verbinski’s The Lone Ranger was a failed attempted to try something similar. It seems only with the conceit of a world constructed out of Lego blocks.

While The Lego Batman Movie is quite funny, there comes the point somewhere near the end of the second and beginning of the third acts that it feels a bit thin. The joke can’t quite sustain itself, but the film does come to a satisfying ending. I think the biggest problem is that the story devolves into your typical beam of light shooting into the sky final battle with so much happening on screen (a la Michael Bay) that it’s a little hard to understand and invest in the outcome. Even with the plot revealing some of its weak spots the film is still incredibly enjoyable and very very funny. I think it’s the best Batman film since 2008’s The Dark Knight.

The Lego franchise shows no signs of stopping. In 2017 we still have The Lego Ninjago Movie set to come out and 2019 will see both The Lego Movie Sequel and The Billion Brick Race. My hopes are that the production team can keep the quality of humor as high and fresh as they have so far. It is very easy for a family film franchise to wear out its welcome and this one I hope has sustainability.