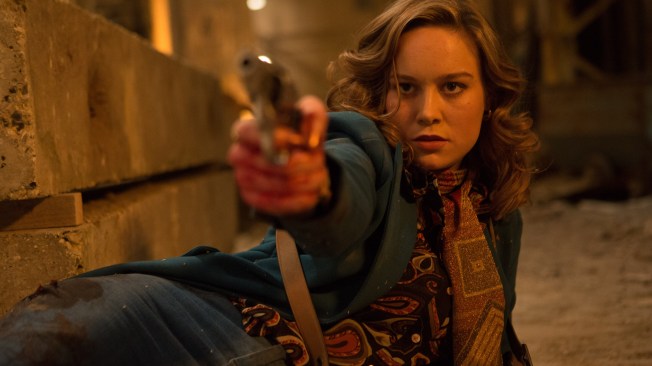 It was Boston in 1978, two members of the Irish Republican Army, Chris, and Frank (Cillian Murphy and Michael Smiley, respectively) are making a rendezvous with a South African arms dealer, Vern (Sharlto Copley) in an abandoned factory to purchase weapons for the civil war back home. Their intermediary, Justine (Brie Larson) assures them the deal is right and this is backed up by Vern’s representative, Ord (Armie Hammer). However, as the moment of truth nears closer, money exchanges hands, irregularities about the weapons are addressed, and the various members of each side interact it becomes apparent that something is about to blow.

My love for Ben Wheatley’s work continues with Free Fire. Is this his most profound or important film? Nope. But it is a pretty impressive technical achievement, an exercise in choreography and blocking. There is a single set, the abandoned warehouse, and it gets used to its fullest potential. Looking like the shell of a war-torn building, there are plenty of crumbling pillars, stacked rotting crates, and other places to take cover. But the environment is in disrepair, so the more shots fired, the more figures becomes exposed and so the tension ramps up.

Free Fire is not as masterful as Tarantino’s Reservoir Dogs when it comes to the close quarters gun work and anxiety, but he makes a decent play of it. The film is very entertaining and moves like a symphony, letting each player perform then swelling to a violent crescendo after violent crescendo. It’s the sort of movie that’s not too challenging to plot out on paper and see the rising and falling actions.

Wheatley isn’t ashamed of the B-movie qualities of Free Fire and really enjoys himself. Characters are full of snappy banter despite being shot multiple times. Yet, he doesn’t shy away from how brutal gun violence can be, as well as violence in general. One character is set on fire, another receives one of the most graphically violent deaths involving a motor vehicle I’ve seen in awhile (think Toxic Avenger). Within the midst of this bloodshed, Wheatley still plays up a comical love triangle between Chris, Justine, and Ord; a love triangle the audiences knows isn’t going to end conventionally.

Wheatley has managed to assemble a very skilled cast. On top of the aforementioned “lead” actors, we have Jack Reynor (Sing Street) and Noah Taylor (Almost Famous, Submarine), plus a few new faces that deeply impressed me. Cillian Murphy does fine, primarily playing the cool, unphased guy. Brie Larson is great as always. The two highlights for me were Sharto Copley and Armie Hammer, they work very well as a comedy duo together, and I was genuinely surprised at Hammer’s comedic timing.

It’s a pretty impressive feat to devote an entire film to what is essentially a 90-minute extended set piece. This may not be the best sell for Free Fire, but if you approach the film as an exercise in technique and a lighter companion piece to Wheatley’s 2016 1970s period film High-Rise, it’s pretty fun. Where High-Rise was played with deep themes of societal inequity and how technological progress can revert humanity, Free Fire is about how people who live in a state of violence will likely be undone by the violence they are responsible for.