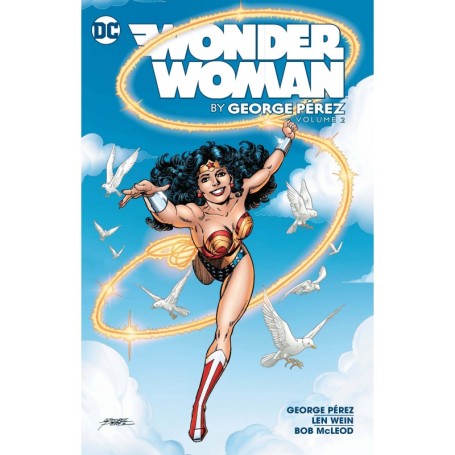 Following the first year and a half arc of the Wonder Woman reboot, Perez settled nicely into his own pocket of the DC Universe. In this volume, Wonder Woman’s fame makes her the target of cybernetic villain Silver Swan, a visit to Greece puts her into direct conflict with the sorceress Circe, and Themyscira opens its gates to the people of Man’s World leading to disastrous consequences. The Maid of Might struggles with the identity the world has assigned her and her own developing feelings for fellow superhero Superman. Her host family, the Kapatelis mother and daughter, Julia and Vanessa are both going through their own personal upheavals. Julia toys with one relationship and ends up with a teacher at Vanessa’s school. Vanessa becomes jealous of Diana when her crush becomes infatuated with Wonder Woman and finally ending up with another girl entirely. She also experiences the sensation of sudden popularity when she and Julia become the first visitors to Man’s World since Steve Trevor.

I always forget how insular each title felt in the wake of DC Comics’ Crisis. In the modern realm of comics, there is a push for the shared universe to emphasized regularly. While Perez’ Wonder Woman does occupy the same world as Superman, their encounter is brief. Instead, the writer-artist spends most of his time developing the mythos around Wonder Woman, first through two major female villains and then through the evolution of the Olympians. A story in the pages of Action Comics has reverberations throughout this collection and could feel disorienting because of a lack of its inclusion. The Wonder Woman/Superman meeting led into that particular story which involves Darkseid of the New Gods attacking Olympus and driving the old gods away. In this collection, we see only the aftermath when Diana visit the desecrated home of her gods. Other than that plot beat and one scene near the end that foretells the Invasion! crossover, the stories here are one continuous closed arc.

Wonder Woman deals with fame in a way that was never examined with either Superman or Batman in their 1980s reboots. Superman is just sort of there with the same level of fanfare as before. Batman is framed as an urban legend who lurks in the shadows. Perez went a very fantastic and public route with Wonder Woman’s arrival in Volume 1. By the time Volume 2 rolls around, she is a celebrity, complete with Mindi Mayer as her publicity agent. Mayer is responsible for the Wonder Woman Day celebration in Boston that leads to the confrontation with Silver Swan. I felt the same way about Silver Swan as I did the involvement of The Cheetah in the last volume. There’s something that feels underdeveloped going on. Swan has her own background that involves an entirely new cast of characters and even a secret organization backing her. This plays out for about two or three issues and ends with a standard hint that despite appearing dead, Silver Swan is very much alive. The character would spend a long time in limbo, and never actually be developed beyond this initial introduction. The Silver Swan moniker would be resurrected though, and in a very dramatic manner but not until Phil Jimenez was writing the title in the late 1990s/early 2000s. More on that another time.

The biggest villain introduction of this collection is Circe. She is the same Circe of myth introduced in Homer’s The Odyssey and is still at it, transforming locals into her man-monsters. Perez sets up Circe as a clear arch-nemesis for Wonder Woman which makes sense because of his strong focus on the mythological roots of his heroine. There’s an air of mystery when Wonder Woman arrives in Greece and feels a strange presence emanating from a nearby island, which causes her to faint. Circe is shown in shadows, and the audience is made very aware that a conflict is coming between these two. It should be noted how sexual Circe is presented, she is essential a personification of male lust, turning men into animals. Perez pulls in his constant portrayal of the Olympians as profoundly flawed gods, by making Circe’s mentor, Hecate, shunned by them despite also being a child of the Titans. Hecate, a moon goddess, is seen as the chief patron of witchcraft and taught Circe everything she knows. So, Circe definitely owns her sexuality, and it is deeply ingrained in her craft. In that way, she is more worldly and less naive than Diana and manages to best her at first.

The final arc in this collection was actually the first one I read as a child and involves Diana being made a goddess of truth by the Olympians, Themyscira being opened to the public and the revenge of Phobos and friends. Perez leans heavily into featuring the god Hermes and playing up his hubris. When the god of messengers and thieves arrives in Boston, he immediately starts using his powers in very public, brash ways. The public eats it up while Diana remains more reticent about what effect Hermes will have long-term on these people. He explains the dynamic between faith/belief and the power of the gods to try and assuage her. By this time Diana has gone through a lot of personal turmoil centered around her celebrity and just isn’t going for it. The big climax here is the return of Ares’ son Phobos and his unleashing of the world’s first mass murderer, Ixion, a mythological figure who has transformed into a monstrous giant after eons imprisoned in Tartarus.

Over at Marvel Comics, the Secret Empire line-wide event has just wrapped up, while DC is just getting into its Metal crossover storyline. There is a sense now that most character will not be allowed to just incubate in their own titles and develop. I think about the great runs that have come out, just from DC alone, of allowing a character to just be: Animal Man, Starman, Swamp Thing. But that seems less and less common. Perez’s run on Wonder Woman benefited greatly from being left alone, even with a few deviations (Millennium, Invasion!). Ironically, he would wrap up his near six-year run on the title with a line-wide event, though still restrained by today’s standards, titled War of the Gods. We will eventually get there, but I am excited for volume 3. Volume 2 marks the end of my knowledge of Perez’s work on this character up until War of the Gods. I am interested to see where he goes next.