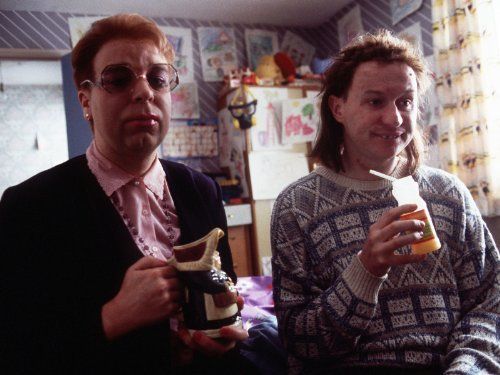 With two series under their belt, the League of Gentlemen desired to inject freshness into their show. They accomplished this by upending the format of the first twelve episodes and making series 3 a succession of spotlights. This allowed for a greater depth of character development, something they were already good at but hindered due to the need to fit so many character bits and sketches into single entries. The more significant challenge was how to choose from such a broad catalog of creations that the group had created over the years. The chosen few were Pauline, Lance, Geoff Tipps, Alvin, Stella & Charlie, and a mysterious new character.

In the opening scene of series 3, the troupe makes a powerful statement about what has made their show famous and what they plan to do about that. Edward and Tubbs, seemingly killed by an angry mob at the close of series 2, rise from the ashes and are immediately plowed down by a train never to be seen again (well until the 20th anniversary series in 2017). It would have been easy for the group to coast on the mascot-like characters of Royston Vasey, but instead, they went a riskier route.

The depth of pathos and drama working in counterpoint to this iteration of the series is stunning, and it is unlike any comedy series I have seen, either British or American. Pauline turns up in a women’s prison following her false imprisonment of Ross but is soon released, forced to live with her former client Mickey. Mickey apparently has feelings for Pauline, which he shows in his goonish-yet-endearing ways. However, Ross pulls Pauline into a profoundly sordid scheme that involves reporting on Mickey’s abuse of the dole. This culminates in two opposing sex scenes, both of which can be read comically but equally as dark and dramatic. The tenderness between Pauline and Mickey is so genuine and honest that it counters any sense of this being humorous just because one is a man in drag playing a woman. The love feels real.

My personal favorite is Alvin Steele’s spotlight. Alvin is the proprietor of the bed and breakfast inn The Windermere. His wife is less interested in the inner workings of the B&B business as she is in pursuing their sexually promiscuous lifestyle. In a beautiful counterpoint, Alvin’s obsession with landscaping and esoteric yet banal trivia is his act of rebellion against his bride. This goes as far as his ongoing relationship with an employee at a local gardening store. They talk in hushed whispers about going through catalogs of yard tools in bed together. The conclusion of this particular chapter is one of the more macabre and deviant ones, and that is saying a lot from a program like this.

Sadly, the final series (until the brief 2017 revival) ends on a very mixed note. The reveal of the true identity of the strange charity shop employee Keith Drop is terrific, but the subsequent rushed plot resolution feels incredibly sloppy and isn’t helped by poor early 21st-century special effects. While as unsatisfying as the final scenes of series 3 are, overall, we are left with a vibrant piece of comedy. The League has always professed to be influenced much more by the folk horror genre and classic British cinema, than of any particular comedian. This shows in the cinematic tones series 3 evokes. It would be fifteen years until we revisited Royston Vasey, but we left with the troupe at its height.