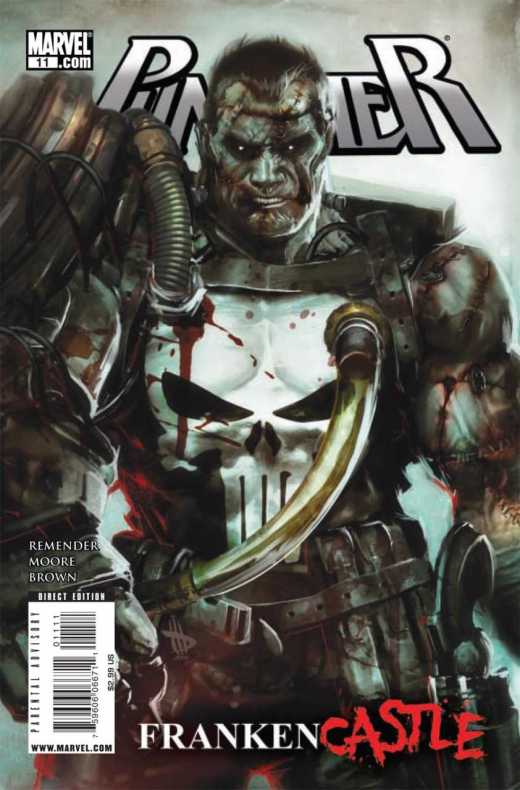 Punisher faces off with Norman Osborn’s HAMMER, the villain’s answer to SHIELD. Dealing the killing blow is Daken, the twisted son of Wolverine. Their rooftop battle concludes with the Punisher sliced into pieces and dead in an alleyway. The end of the story right? Nope. Punisher’s remains are taken underground by a legion of monsters, living in fear of Helsgaard and his forces. Helsgaard is a deformed monster hunter who leads a band of modern-day samurai to purge the planet of all they view obscene and unnatural. Punisher is rebuilt as a Frankenstein-esque creature by the vampire Morbius. He is reluctant to help these misfits at first but circumstances and a reminder of his mission to fight evil draw him into this epic conflict.

This is the best run of Punisher I have ever read because it gets rid of all the “realistic” grim-n-gritty atmosphere in which the character has typically been presented. This wasn’t the first time Punisher had been rewritten in a more fantastical mode, that would be the Angelic Punisher from the late 90s. This version has the benefit of being incredibly well-written and beautifully illustrated. I was immediately interested in exploring this subterranean world and saw some compelling characterization in Punisher for the first time. He wants to leave as soon as he becomes conscious but sticks around for a bit only to witness the murder of a mole child at the hands of Helsgaard’s forces. This becomes the triggering element to send him into a murderous fury. 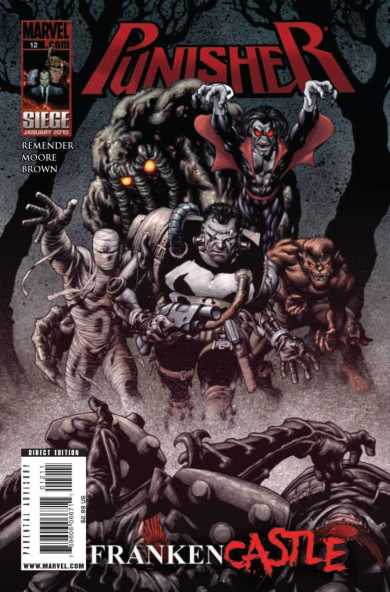 The supporting cast is a beautiful sampling of the monster side of Marvel comics: Morbius the Living Vampire, Werewolf by Night, The Living Mummy, Man-Thing, and others. Remender even ties the mythos of pulpy Marvel monster hunter Bloodstone and his daughter Elsa. If you were a fan of the traditional Punisher, then it makes complete sense that you would be turned off by the loss of the street level crime stories. For me, who has never engaged in that presentation of Punisher this was a welcome change. You still have Punisher gunning and killing hordes of bad guys it’s just in an exaggerated and more cartoonish manner.

The first half of the Frankencastle arc is the best part because the second act immediately feels like a winding down of the whole concept. Remender likely had a sense of impending cancellation, and so we have a story that is attempting to wrap up major plot points from the entire run. The Bloodstone gem introduced in the first Frankencastle arc becomes a significant McGuffin while a rematch with Daken is the big final storyline before a rushed epilogue. There’s a trend in comics that are canceled with only a couple months to wrap things up, where the writer tries to cram all their ideas into an abbreviated issue. Within a single issue, Punisher has his time with the legion of monsters wrapped up, and then he’s reverted to his standard human form. 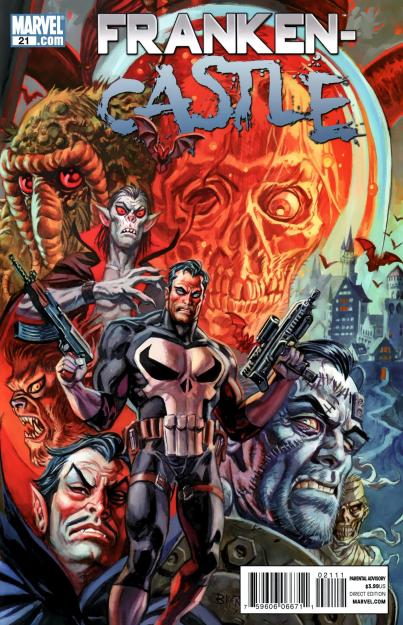 Of Remender’s work so far in this series, Punisher is the one I was least enthusiastic at my conclusion. Remender did an excellent job with what he had to work with, and he did bring some strange, exciting ideas to a character I traditionally find bland. The double strikes of being handed a character with not much to work with and editorial interference via cancellation left us with a pretty middle of the road series. Frankencastle was such a brilliant twist on Punisher, and I hope in some manner the character is brought back for a more extended run, even if it’s an alternate reality/What If? scenario.