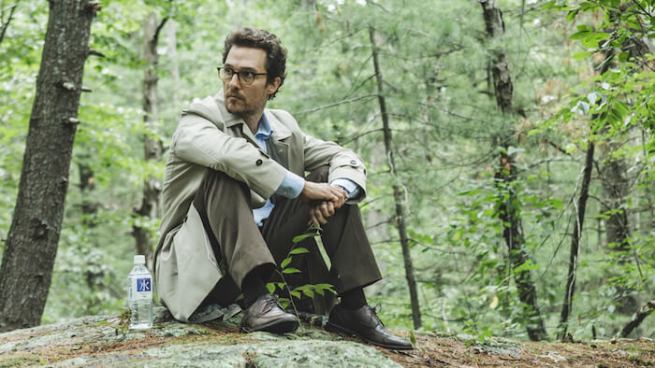 Arthur Brennan is a distraught man who books a one-way ticket to Japan and finds himself about to commit suicide in the beautiful and notorious Aokigahara or Sea of Trees. He is stopped in the middle of his act by Takumi, a Japanese man who stumbles through the forest, bruised and bloodied, saying he is trying to find a way out. Arthur can’t stomach letting this man wander until he dies and decides to lead him to the path before returning to his original intent in the woods. However, the track isn’t where Arthur remembers it, and he and Takumi get lost deeper and deeper into the Sea of Trees.

I’ve never been a huge fan of Gus Van Sant’s work, in regards to actively seeking out his films. Of his work, I’ve seen Drugstore Cowboy, Finding Forrester, Gerry, Elephant, Last Days, and Milk. My biggest takeaway from the segment of his filmography that I’ve seen is that it’s all merely okay, nothing that blew my mind or made me want to revisit these pictures. Of them all, I would say I enjoyed Milk the most, and that has nothing to do really with van Sant’s hand. I didn’t even realize Sea of Trees was one of his movies until I started watching it and saw the opening credits.

Sea of Trees look gorgeous, thanks to cinematographer Kasper Tuxen, whose only credit I already knew was Mike Mills’ Beginners. The images are crisp and lush; he films the forest with a deep love of the environment. Some shots are legitimately stunning. I recall one scene where the two men step through some trees and down a hill to reach a stream, and they are captured in silhouette. It’s a gorgeous moment. There are other moments where light breaking through the canopy is used to significant effect and Tuxen is quite adept at infusing Aokigahara with a sense of mystery.

However, that is where the positives end. The story feels surprisingly amateurish, a hodgepodge of vague metaphysical nonsense about grief and death that doesn’t amount to much. There is zero subtlety in how this story is told, and the entire affair feels overlong. This is a film where at one point I felt the story coming to a crescendo that was going to be mildly satisfying and leave the audience with a bit of ambiguity. Then the movie keeps going and going and going. It reaches absurd levels with multiple scenes that feel like periods on the sentence.

The plot uses way too many cliches, most notably a loved one who has developed cancer. We veer heavily into maudlin Nicolas Sparks territory, but there were opportunities to make the characters more interesting. Arthur (Matthew McConaughey) and wife, Joan (Naomi Watts) have deep-seated resentment for each other starting with adultery years before. There is a chance to explore this in the context of her discovery of a brain tumor, but instead, they suddenly fall deeply in love again looking forward to a future post-brain surgery. I think it would have been more interesting to see those lingering emotions about his infidelity create conflict while he is trying to do better. Instead, Joan becomes a prop to propel Arthur into doing things.

Another human prop in the film is Takumi (Ken Watanabe) who gets zero character development. In film criticism, the trope of the “magical negro” has been pointed out as a way writers diminish the agency of black characters (think almost every Morgan Freeman role). The black character is a fantastical conduit of plot progression for the main white character. So too is Takumi who, when the film comes to its conclusion, is insultingly marginalized to the point that his existence is erased. Some critics have expressed negative feels about a white American character being at the center of a film set in the Sea of Trees, but I don’t have any issue with that. I think that story could have worked if the one major Japanese character was developed and given an arc of substance. Sea of Trees is a film with a beautiful exterior but very little going on inside.