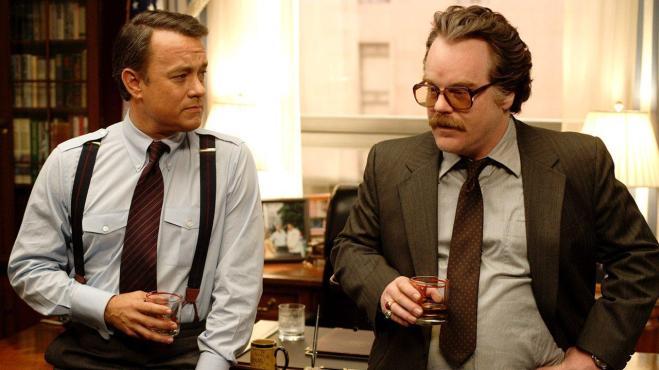 In 1980, Democratic Congressman Charlie Wilson of Texas was known as a hard-drinking, hard-partying, womanizing member of the House Appropriations Committee. Wilson was a man quite deft at securing favors from his fellow congressmen and infamous for his office staff of “angels,” young and fit women that ran his day to day operations. Despite a mind very focused on the material and carnal, Wilson was deeply moved by the footage he saw of Afghan refugees. A fact-finding mission to Pakistan found him walking among a camp comprised of a one-fifth of the Afghan population that had fled in the wake of the Soviet invasion. Wilson, pushed by Texan socialite Joanne Herring and CIA agent Gust Avrakotos, was one of the figures responsible for getting weapons into the hands of the Afghan freedom fighters who ultimately repelled the Soviets.

When you think booze-swilling and sex-infatuated the first name that might not leap to your mind is Tom Hanks. Flanking him in supporting roles are Julia Roberts as Herring and the late great Phillip Seymour Hoffman as Avrakatos. This is a solid cast, and when you add a script by Aaron Sorkin and direction by the legendary Mike Nichols, you would think it’s a certified hit. However, so many elements clash tonally that I found myself very unsure of what exactly this film was supposed to be in the end. I’m not what exactly the movie was trying to say.

A coda gives us a relevant insight into how Wilson felt in the wake of the Soviet defeat, expressing sentiments that because the operation was so covert, the majority of the Afghan people would not understand the role the United States played in the war. These big ideas expressed at the conclusion of the film stand in stark contrast to everything else we see on screen. Both the CIA and the Mujhadeen award Wilson in closing moments of the picture, and he only has a couple of lines to his staff about the cost of not making their involvement more apparent. Nichols instead decides to make the film so colorful and flashy, while employing an embarrassing amount of stock footage and poorly done CG that the result doesn’t say much about anything.

Aaron Sorkin’s script is also a disaster, not sure if it wants to be full of lightning fast quips, a sensitive character drama about the personal substance abuse of Wilson, or a glorifying ode to American victory in the Cold War. Without a clear thematic core, the movie wanders about, juxtaposing scenes that don’t even seem like they came from the same film. I’ve never been a full-bore fan of Sorkin’s but have enjoyed his work from time-to-time. I honestly don’t get why some people fawn over his work. So often it feels self-indulgent and when it comes to political film and television that is one of the worst things to be.

Self-indulgence is the word of the day with Charlie Wilson’s War. Sorkin’s script isn’t restrained in a way to make its subject matter meaningful. Tom Hanks is trying to be comedic and have deep pathos, but he doesn’t seem to be able to pull it off with this material. It’s not helped by his poor attempt at a Southern accent which only provides another layer of dissonance that the audience has to work through. Nichols seems very half-hearted in his direction. This is the director’s second appearance during the Red, White, and Blue marathon (Primary Colors) and I have to say these works from in the latter part of his career are flat out embarrassing. The comedy feels on the level of a sitcom rather than something cinematic, weaving humor and complex ideas of foreign policy. Our next film, In the Loop, will manage to show that you can do comedy and substance when it comes to American politics and international affairs.