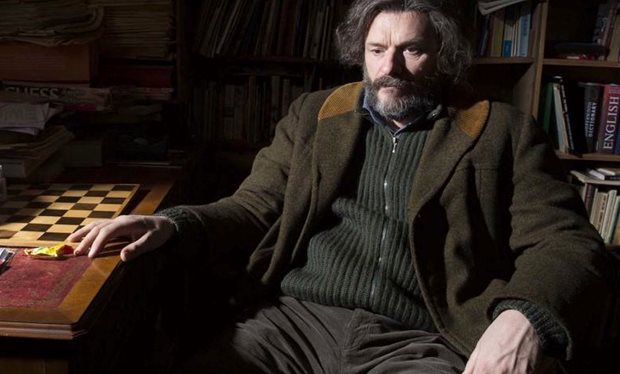 Maurice Flowers is a depressed children’s author living in a quaint country cottage with his family. A few months ago, after his depression began, Maurice entered into an open relationship with his wife, Deborah. Deborah is awkwardly attempting to extend herself and explore this option given to her but is feigning enthusiasm. Their twins, Donald and Amy, are overly ambitious grown children who bicker constantly and are sunk into their obsessions of craft (inventing and music, respectively) but share a mutual love for their neighbor Abigail. Rounding out the Flowers household are Maurice’s aged mother and Shun, a young Japanese artist who illustrates Maurice’s books.

The British television series Flowers is overwhelmed with thematic weight. The whip-smart comedic banter often obscures this depth and the dark places its characters reach, causing the series to feel like a Ricky Gervais-scripted Edward Gorey illustration. This combination results in a tone that immediately captivates its audience. The strength of the writing sustains the viewers and delivers a brooding tale of what happens when the lines of communication between family members ultimately collapse. The opening scene features Maurice gathering a chair and a hangman’s noose, marching out to a tree in the backyard, and failing to end his own life when the branch breaks. All the while, we hear him narrating via excerpts from one of his Grubbs Family children’s books. The text of the book reflects the reality we see before us and sets the standard that people will talk through a veneer of fiction throughout, unable to tell the ones they love about their pain.

This same obfuscation through fiction bookends the episode’s final moments. Hugo, a student of Deborah’s whom she teaches trumpet, stumbles upon Maurice’s mother. The senior woman has fallen and harmed herself while trying to hide the noose she discovered in the yard. Maurice, slipping on his children’s author hat, dives into an ad-libbed story about the rope being a magic snake that symbolizes good luck. However, if you were to tell anyone that you saw the snake you would be cursed. Earlier, Hugo’s mother conveys what a fan of Maurice’s work her son is and that it’s so good for him to be around a healthy family. Maurice’s betrayal of Hugo’s trust, a boy whom we are told, is working through his mourning over his parents’ divorce, resonates with sadness. Maurice is so desperate to hide his suicidal ideations from his family he’ll lie to a child.

Deborah possesses a brittle manic nature, unable to stand silence because in those moments of pause is when she doubts her marriage and her family. She compensates by performing as a loving wife and enthusiastic explorer of carnality. There’s never any question that she hasn’t acted on the permission she and Maurice have agreed to. She’s afraid of what it would mean to cross that line. Deborah regularly delivers tea to the workers building a wall between the Flowers property and their neighbor. Deborah openly questions why this wall is being made, and one worker replies that they do the job they are hired for. The audience can begin to surmise what sort of dynamic exists between the Flowers family and this unseen neighbor. As the workers thank Deborah for the beverage she replies with nervously humored reactions as if they are making sexual innuendo; they most certainly aren’t. Because this exchange has happened so regularly the workers react with bemusement. Deborah is a woman who has been pulled in too many directions by expectations and can’t possibly maintain this tension for long.

Then we come to the children, Donald and Amy. On the surface, they represent a very fundamental conflict in humanity: science vs. art. Donald fashions himself a sequel to Thomas Edison, building inefficient devices that complicate seemingly otherwise simple tasks or basically duct taping two objects together and behaving as if he has accomplished something. Not much is revealed about Amy in the first episode other than her devotion to making music. Maurice asks Donald to check on Amy to see if she’s eaten today implying that her music has become a hindrance to her day to day in the past. We learn that Donald and Amy are both infatuated with the neighbor woman, Amy, whose father is a lewd plastic surgeon with designs on Deborah.

The decision to make the first episode centered around the anniversary party of Maurice and Deborah is a perfect choice because it becomes a structure to underlie how broken this couple is. Deborah buys Maurice a gift of a self-help book, “How to Be Happy” while joking it away by saying she bought it because of how “ironically funny” the man’s necktie is on the cover. Maurice has bought nothing so passes off an intensely erotic anime drawing Shun has made, claiming Maurice commissioned it for their anniversary. Deborah, continuing to play off her uncomfortable feelings about an open marriage, exudes false joy over the drawing and unconvincingly states how excited she is about this new period in their lives.

In an interview with Den of Geek, creator Will Sharpe explained that Flowers isn’t a dark show so much as it is a sad one. Julian Barret, who plays Maurice concurs stating: “I find sadness quite funny[…] I don’t know if you saw Force Majeure. I loved that film. It’s quite a sad film, and the lead was crying at one point in that, and it just made me laugh so much.” Flowers is a series that will make you laugh as much as you cry, pathos exuding out of every insecure character that haunts this crumbling country cottage. This first episode merely sets the table, and throughout this week we’ll explore this family and see if they can heal to any meaningful degree.