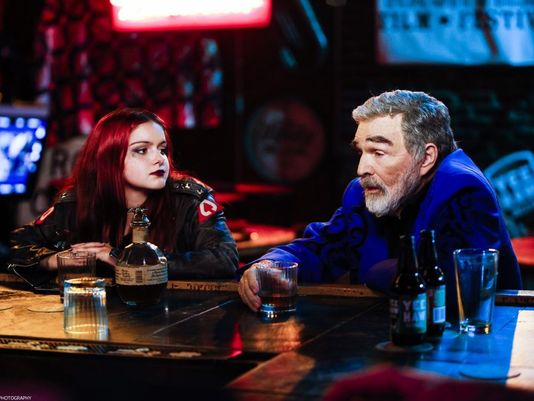 Vic Edwards (played by and loosely based on Burt Reynolds) has passed his prime as an A-list actor in Hollywood. His glory days were the 1970s, and now he’s a frail old man living alone in his gated estate in 2018. A letter comes from Nashville inviting him to a film festival where he will be awarded a lifetime achievement honorific. Vic debates going and finally gives but arrives to find the event is not prestigious but operated out of a bar. The organizers are enthusiastic fans of his work, but Vic feels lied to and humiliated. He eventually strikes up a friendship with one of the organizer’s sisters, Lil, a troubled young woman who reminds Vic of his daughter. Together they journey back to Vic’s childhood home so he can account for some of his past mistakes.

For people who walk around saying A24 is this 10 out of 10 film distribution company, they have genuinely not explored the full catalog. The Last Movie Star could have been something decent, but a mix of bad screenwriting and casting led to its status as a dismal failure in my opinion. A fictionalized examination of celebrity through the eyes of Burt Reynolds could have been fantastic. He was still a good actor and the first 10 minutes of the film, with minimal dialogue present, allow his strengths to shine forth. That opening does a lot without explicitly saying much. However, the minute other characters come on screen the picture devolves into straight-up exposition after exposition. If Rifkin had decided to explore the more banal aspects of living as an elder contrasted with the rush and extravagance of fame, then the film might have stood a chance of at least saying something interesting. Instead, we get an elevated sitcom.

Writer-director Adam Rifkin is the guiltiest party on set in my book. He’s written many screenplays in his 30-year tenure in Hollywood (The Chase, Mousehunt, Small Soldiers, Underdog, etc.) and directed some cult status movies (The Dark Backward, Detroit Rock City). However, none of his work displays the gravitas needed to pull off something like The Last Movie Star. Vic never really seems to face the consequences of his past sins and his long dark night of the soul feels like a hiccup. By the end of the movie, everything looks rosy, but I couldn’t help but wonder what exactly, if anything, did Vic fix?

We never understand why these film fans love Vic’s movies. We never get a sense of what made Vic decide to come back and accept the honor. The editing of the movie adds to the confusion because there are distinct moments where, because of Reynolds’ health, a stand-in is playing Vic with his back to the audience and a terrible wig on. There’s a scene between Reynolds and Chevy Chase that is ADR’ed to hell so that we can see most of this dialogue was recorded months after filming. Any time you see the camera hold on one person during a conversation while the other character’s lines come from offscreen you know you’re in for some trouble.

Every person presented to us on screen is one-dimensionally composed. Lil is a gothy-angsty artist who keeps going back to a bad boy that cheats on her. She’s shown in her ever-present uniform of cut off t-shirt, and jean shorts cut incredibly high. Lil is a character the director is sexualizing, but then her dialogue feels so off-puttingly sanitized. When she briefly ends up in bed with her rogue of a beau Lil describes the encounter as a “hate bone.” At that moment I realized the word “fuck” had not been uttered once in the movie. The characters and plot indicate the story should be presented with a specific, harsher tone yet the film feels like it was written to be a sitcom pilot. All I could think as the ending credits rolled was what a shame that this is the last piece of cinema to showcase Burt Reynolds.