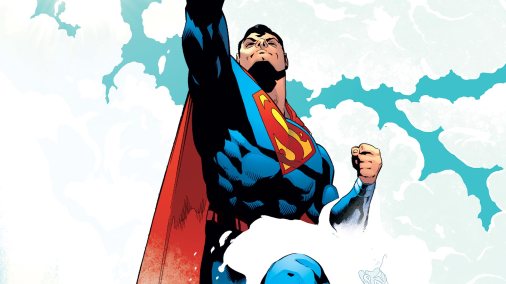 Superman is dead! Long live Superman! Ten years ago, the Superman and Lois Lane of a long dead universe came to the current DC Universe. They have lived in secret raising their son Jonathan who has inherited some of his father’s powers. The Superman of this reality had died in battle recently, and so this alternate reality Man of Steel has taken up the mantle to keep the dream alive. He has to balance this with the responsibility of helping Lois raise their son. Of course, villains get in the way. First the Eradicator, an ancient Kryptonian robot bent on recreating the dead planet shows up. Later, Superman and Son clash with Batman and Robin as well as the macabre Agent Frankenstein. For the Kent family, this is just life as usual.

This reboot of Superman was a dream come true for me. Writer Peter Tomasi (Batman & Robin, Green Lantern Corps) has turned out to be the perfect writer for this wild and imaginative new take on a classic hero. I personally think it is an incredibly daring decision to reintroduce Superman and Lois Lane as parents. This particular story had been done sometimes before as an “Imaginary Story” in the 1950s and 60s, mostly a one-off What If. But this time there are plenty of stories to develop the relationships and allow us to watch Jonathan Kent coming into his own.

The opening story in this collection is the one-shot Superman: Rebirth comic. This is the jumping off point for new readers, attempting to recap the pretty convoluted way DC editorial offed the New 52 Superman in favor of bringing back the more popular Modern Age version. I personally never clicked with the New 52 Superman mainly due to the poor writing and lack of direction with the character. I knew things were off to a rough start in 2011 when Grant Morrison’s Action Comics and George Perez’s Superman did not even seem to be the same character. It didn’t help that Morrison was given the job of doing a Year One arc while Perez was dealing with the same Superman five years down the road. The two books never really found a strong voice after shuffling through numerous creative teams from 2011 to 2016. The Rebirth chapter serves to introduce this older Superman to this universe’s Lana Lang, Clark’s childhood friend. It’s a simple story with Lana wanting to place her Clark’s remains beside his parents in Smallville.

The first significant arc is where the series really kicks off and finds its feet. “Son of Superman” takes up the first six issues of the run and sets up the worries over Jonathan’s proper development as a metahuman. His powers are not fully developed as he’s still a child and because he shares human DNA from Lois. The Eradicator is awakened and challenges Jonathan’s right to exist, labeling him as an aberrant, undeserving to carry Kryptonian DNA and thus needing to be exterminated. While trying to figure out a way to neutralize the Eradicator, Superman ends up in Metropolis where we are introduced to an old Superman mega-fan Bibbo. That was a nice nod to this Superman’s reality as a way to show some things are the still the same.

Eventually, the story wraps up on the moon where Superman brings Lois and Jon to hide them in Batman’s secret moonbase. Eradicator follows, and there is a showdown with Lois taking an unexpected and exciting role in bringing the villain down. I would argue that this opening story is a bit overlong as six issues (read 180 pages or so). There is definitely a lot of story decompression going on, and I think we could have been told the same story equally in half the number of issues. That said, the artwork by Gleason, Jimenez, and Mahnke is phenomenal. Due to the series,’ bi-weekly release schedule artwork had to rotate hands, and each gentleman plays to their strengths. The movement, energy, and color through these six issues is the kind of stuff that makes you feel like a kid again. The sense of adventure and wonder that Superman comics should have is restored here. It definitely helps that much of the story is told through the eyes of Jon, pretty much a perfect stand-in for the audience.

The next issue is a one-off that has the Kents taking some downtime and attending the Hamilton County Fair. The conceit is that Clark agrees to take the night off as Superman, yet runs across a group of criminals planning to rob the ticket booth at the front of the fair. Of course, Clark has to do something and tries to foil the robbers without Lois finding out. This issue also gives a chance to develop Kathy Cobb and her Grandpa more, two characters introduced in the first arc. The Cobbs are neighbors to the Kents and seem to be innocuous at first, but the art and writing definitely hint that there is something up with her grandfather.

Then we get a two-parter, “Escape From Dinosaur Island” that serves as a tribute to the late artist-writer Darwyn Cooke. Cooke was the creative talent behind the brilliant DC: New Frontier mini-series and always showed an affinity for classic early Silver Age interpretations of characters. The opening chapter of New Frontier told the last hurrah of The Losers, a World War II-era group of soldier-adventurers. They end up trapped on an island lost in time, and here we find out that Captain Storm is the only one left. Superman and Jon get help returning to their point in time by taking on a pulp classic giant albino gorilla. This feels like a high adventure right out of the Silver Age, and Cooke would have loved it. 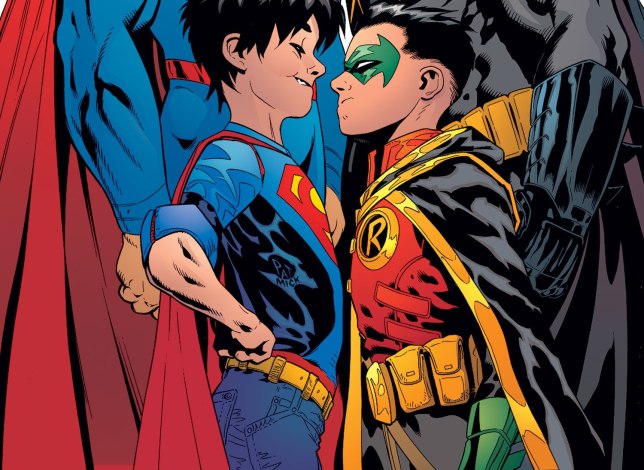 This leads into what is likely the marquee story of the collection, or at least the arc that sets up the most pieces going forward, the two-part “In the Name of the Father.” This arc has the long-awaited first meeting between Jonathan Kent and Damian Wayne aka Robin. What works so well for this story is that Tomasi has years of experience writing Damian and slips the character right in without missing a beat. The immediate dislike and conflict Jon and Damian have is a perfect foil to the seemingly easy-going relationship Superman and Batman have traditionally have. It also works as an ideal counter to those imaginary stories I mentioned earlier wherein the children of these heroes were often fast friends. Damian is consistently one of the funniest characters to read when handled by the correct creative team.

The final two issues present “Super-Monster” a team up between Superman & Lois and Agent Frankenstein & The Bride. Agent Frankenstein was a character created by Grant Morrison for his Seven Soldiers limited event. The character had a lot of staying power and actually got his own solo book in the New 52 reboot of 2011. I suspect that the character was included at the behest of artist Doug Mahnke who co-created him with Morrison. The story involves Frank, in his capacity as an agent of SHADE, hunting down an alien serial killer posing as a human in Hamilton County. It’s a fun, fairly inconsequential story to wrap the book up.

Overall, Superman: Rebirth Volume 1 is a great reintroduction to a classic character and of the premiere Rebirth titles. In thinking about some of the past volumes I’ve read, it’s clear they often lack a sense of fun. You would think with characters that have less editorial pressure like Blue Beetle or Birds of Prey the creators would go wild with the possibilities. I most often think of the Superman titles of being strictly curated and shaped. But here you will find some of the most fun, upbeat stories DC put out at the outset of its Rebirth line.