You Were Never Really Here (2018)
Written & Directed by Lynne Ramsay 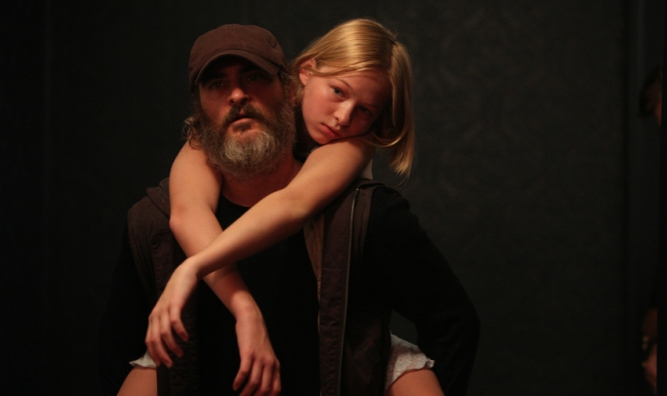 Joe is a man who lives a brutal life. He rescue girls caught up in human trafficking, typically being forced to work as prostitutes. This way of living, of earning money is catching up to Joe. He continually has flashbacks to his childhood abuse and depends on prescription meds to calm his mind. A new call comes in from a state senator, Albert Votto. Votto’s daughter is a frequent runaway, and he has word she’s being held in a brothel in the middle of Manhattan. Joe ventures out to rescue her and finds himself caught in a web of lies that started with Votto. But his mind and body may not be able to handle this one.

You Were Never Really Here is a masterpiece. When we were finished watching it, my wife and I sat for a beat in silence, the credits playing over an empty diner table and the sounds of its patrons talking. When we finally spoke it was to agree that this is the best film we have seen in 2018 so far. I didn’t expect to be so enthralled by this picture when I started but found myself riveted. I was never distracted or felt the pace was too slow. There is not an ounce of fat in this movie; it has been trimmed to lean perfection so that every scene lands with impact.

The plot of this film is nothing unique. Old grizzled guy saves underage prostitute has been the premise of everything from Taxi Driver to The Equalizer. But what sets You Were Never Really Here apart is the way Lynne Ramsay chooses to tell this story. There is minimal dialogue, and Ramsay adheres to the idea that cinema is a primarily visual medium. Joe’s backstory is never delivered via clunky exposition, and he never shares his abuse with a single character. The opening of the film makes sure we understand this is a brutal man we’ll be following without showing him being brutal. After this introduction, we spend the next ten to fifteen minutes watching him show extreme tenderness with his aged mother. There’s no rush to get to the killing because we need to know Joe first.

And the way this film portrays its violence is another way it separates itself from the pack. The first scene of pure brutality, as Joe pulls out his ball peen hammer and gets to work, is shown through the fuzz of CCTVs forcing it to be obscured. This is not a relentless gore-fest, each kill is for a reason, and Joe is very conservative how he metes out these strikes. There is even a moment Joe holds the head of a dying man whom he shot, showing a shocking empathy in the middle of the violence.

What You Were Never Really Here is actually about is the despair of victims of abuse. Joe is a victim. Nina, the girl he is rescuing, is a victim of abuse. Joe’s mother was the victim of abuse. Joe has become her caregiver as a response to his knowledge of her victimhood. We never get the full detail of what happened to the two of them decades ago, only brief flashes. Joe has suicidal ideation in the form of suffocation; this is how the movie introduces us to him. There is a looming sense of despair throughout the picture. But then the ending comes, and you think you know this is going to end in some nihilistic fashion. And it doesn’t. And you have hope.

3 thoughts on “Movie Review – You Were Never Really Here”