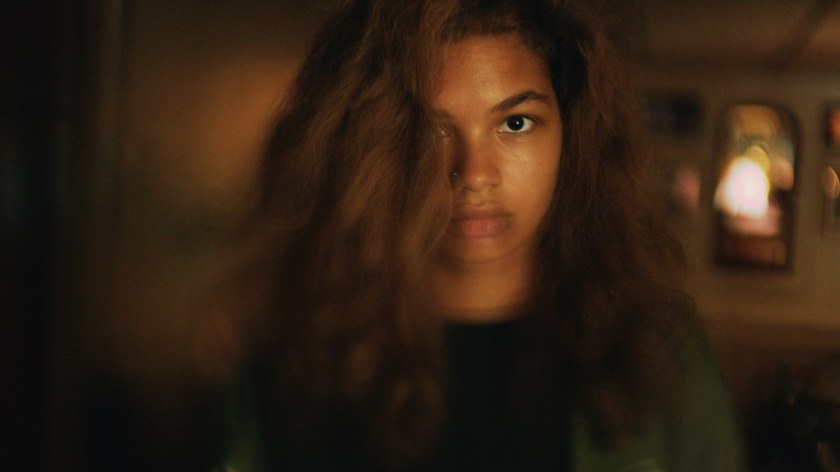 Madeline is a 16-year-old girl living in New York City with her single mom and brother. Her only passion appears to be working with a physical theater troupe. The director, Evangeline notices that Madeline has an intense inner world and works to pull that out. As she discovers Madeline’s conflicts with her mother, Evangeline decides to base the troupe’s new production around the material the young girl provides them. This in-depth examination of Madeline’s issues begins to have an adverse effect while the theater director seems to ignore the worst aspects. As Madeline’s grip on reality and fantasy slips, she spirals back into behaviors that sent her to a psychiatric ward years earlier.

Coming out of this film, there is no doubt that Helena Howard is a remarkable acting talent. She was integral in fleshing the story out alongside director Decker, and Howard appears fearless in her performance. Howard can convey the innocence of teenage Madeline when she experiences her first feelings of love, yet moments later, without a word, we see her expression transform. The audience knows her anxieties are taking over, her fears about her mental stability and how this boy she likes would react if he knew. Later, this same boy comes over while her mother is out and Madeline attempts to impress him by watching porn together. When her mother returns home, she lets slip that Madeline was in a psych ward which sends the boy running and Madeline fuming.

There are no perfect adult figures in Madeline’s life. Her mother is well-intentioned but slips into toxic behavior out of pure frustration. We understand that her mother wants to help her daughter but Madeline is a young adult and it is becoming harder to control her. There’s a phone conversation Madeline overhears about how her medication ran out, and her daughter never told her until a few weeks later. Evangeline appears to be a more comforting figure until Madeline shares a dream she had about attacking her mother with an iron. Evangeline decides to have Madeline workshop this dream and other fights with her mother. This escalates to the point that Madeline’s mother is invited to a rehearsal where the troupe turns her into an improv.

Madeline’s Madeline is a movie that captures the sense of being in the mind of a young girl with mental illness. However, the opening scene features a nurse, haloed in the blurred darkness staring into the camera. She tells the audience, “The emotions you are having are not your own, they are someone else’s. You are not the cat — you are inside the cat.” This reminds us that we are not going to know the exact experience of Madeline; instead, we will go through something like what she lives with. A distance exists between the audience and the actual Madeline, an unavoidable obstacle.

This is not a film that is going to appeal to broad audiences, and I don’t believe the filmmakers even set out with that intent. Madeline’s Madeline is a very well done arthouse film that is difficult to enter and grasp at the start but does reveal much about its protagonist. These background pieces are done with subtle lines and the robust performance of Helena Howard. She is an actress I am excited to follow and see how she grows in her craft.