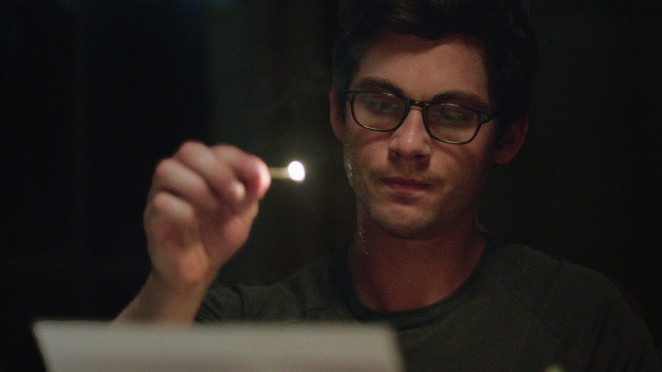 The film opens with the title character, Sidney Hall clacking away at a short story for his high school English class. We cut to him reading said story, interspersed with images of a faceless cheerleader. The story ends up being a piece of self-indulgent misogyny, all about boiling a depersonalized crush into a figure of adolescent masturbation. This is our…protagonist. Sidney Hall. In a flurry of scenes that follow we find Hall becoming a famous published author and finally into a homeless recluse, announcing that this film will be about the search for who this man is and why he is doing what he does. I can’t emphasize how horrible this movie is.

I was under the impression that films like The Vanishing of Sidney Hall were a thing of the past. This is all the worst in self-indulgent, pretentious, pseudo-literary, misogynistic, undergrad level creative writing. I wrote shit like this when I was a freshman, and by the time I was a sophomore cringed. Writer-Director Shawn Christensen didn’t come to this moment of self-realization and believed the garbage he wrote as an adolescent was of the most exceptional quality. This is how his main character is treated, with supporting characters expositing about how long his books have remained on the New York Times bestseller list and what an influential writer Sidney is. People can’t stop telling Sidney that he is the be-all end-all of writers. Do you get that Sidney is a “Great Writer”! When we do hear snippets of his prose, it is nausea-inducing (“She had a virginal quality that contrasted her ice-cold outer shell”).

On the issue of women, Sidney seems to have a pretty low opinion of them. His female English teacher is so out of touch and doesn’t get this genius. I mean she writes romance novels and doesn’t understand the brilliance of David Foster Wallace and Hunter S. Thompson. Yes, white men in literature have been so underrepresented or praised. When Sidney meets his longtime secret admirer, who embodies so much of the dull manic pixie dream girl traits, she expresses her love of Bob Dylan and horror moves to which our “hero” actually replies (and I am not joking here), “Are you sure you’re a girl?” Yes, a wimmens who likes popular music and films. How quirky and charming.

The main antagonist in Sidney’s life is his mother, a cold bitch who resents her disabled husband and wants to chain poor Sidney down. She goes through his room tossing out his comic books and journals. She eventually finds a piece of evidence in a crime that Sidney is holding for a troubled friend and goes apoplectic. This leads to an injury that ends up haunting the young man into his later days. The cause of his misery is this terrible harpy of a woman. Women are bitches, am I right, bro? *vomit*

The plot of the movie is that Sidney is going westward visiting libraries and bookstores, destroying his work, especially his novel Suburban Tragedy. That book is about a tragedy that occurs in the suburbs, could you not figure that out? This book inspires multiple teenagers to kill themselves. Some asshole who is sucking up to Sidney tosses this gem out during the height of the author’s angst that the book will “expose the suburban underbelly of America no matter what the cost.” This is an actual movie made in the present year. How? How? How?

This A24 marathon has been a wild rollercoaster of quality, and I thought I had finally reached the sweet spot. No. No. There is still shit being shoveled out by A24 between the great stuff. I am wondering what was the mindset in picking this movie up and thinking there was any audience whatsoever that wanted to see it?