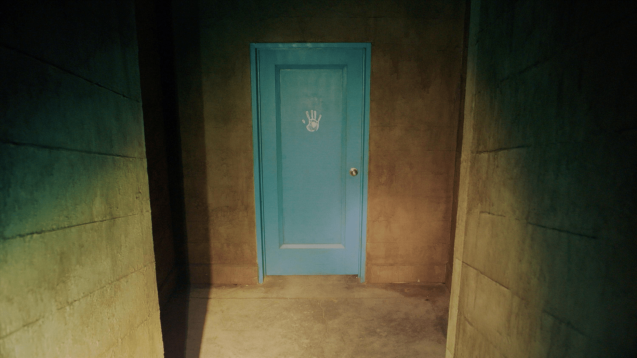 Jillian has just married her childhood sweetheart Tom, and they have moved into his family home with plans to renovate it. One day they discover a door in the basement that wasn’t there before and appears to be impossible to open. Using saws, sledgehammers, and even a shotgun they find the baby blue door won’t open. Finally, Jillian realizes she can open it without a key, it only responds to her touch. Hidden on the other side of the door is something from Jillian’s past, dredged up by her anxieties over her new marriage and questions of her husband’s faithfulness. A new neighbor is there to comfort her. Her psychiatrist is skeptical of her claims and tries to help her. However, this evil thing is awake, and it is leaving the basement.

I have been a huge fan of Syfy’s Channel Zero since season one and have found the series improving with each installment. I still hold Butcher’s Block as my favorite season to date, but The Dream Door did a fantastic job creating some deeply unsettling monsters that populate a sincere human story about doubt and the way our emotions can overtake us if we aren’t mindful of others. Series creator Nick Antosca once again takes a small kernel of a story published in online forums and extrapolates something terrifying while staying true to the core of the source material.

There will be one major thing talked about by viewers of The Dream Door, and that is Pretzel Jack, the soon to be fan favorited monster of the piece. Pretzel Jack is played by contortionist Troy James whose body bending skills make Jack so deeply unsettling. In the middle of the season, there is an attack by Pretzel Jack that has him crab walking down a narrow hallway and overtaking a completely stunned bystander. There’s no way I can convey in words how profoundly unnerving the visuals of this moment are. However, as horrific as Pretzel Jack is, when you examine his design it still looks like a Seuss-ian children’s creation which befits his origins in the series. The designers walk that fine line between silly and monstrous so well.

One of my favorite features of Channel Zero is how Antosca uses the program to introduce audiences to less familiar low budget directors. In Candle Cove we got Craig William Macneil (Boy, Lizzie), with No-End House we saw the work of Steven Piet (Uncle John), Butcher’s Block introduced television audiences to Arkasha Stevenson (Pineapple), and now Dream Door brings us E.L. Katz (Cheap Thrills). While each director is unique to each season, Antosca does maintain a very subtle visual continuity to the work. The pacing is kept slow for the first few episodes to allow the tension to build. Channel Zero succeeds where American Horror Story fails in that regard. With AHS we continually get one creator’s viewpoint on every given genre and hook, and that has led to stagnancy and much predictability. Channel Zero touches on so many different aesthetics of horror, from cosmic horror in Candle Cove, to giallo in Butcher’s Block, to a sort of 1980s/Dream Warriors tone for The Dream Door.

There is no word on Syfy renewing Channel Zero for a fifth season yet, and I get the feeling, based on declining ratings, that the show may have taken its last bow. If that is true, then it is a shame because it is, in my opinion, the best venue for horror on television at the moment. There is no other program with such variety and quality when it comes to showcasing genuinely creepy and horrifying stories. In the age of streaming, I could see Channel Zero making a second life on Netflix or Hulu. Here’s to hoping someone with the right clout manages to keep the series alive.