Throughout Chip Zdarsky’s current run on Daredevil, he’s made it a point to show how it’s not just organized crime that creates problems in urban environments. The police & the city government will agitate the public to serve their own purposes, often to continue a flow of money & power from criminal enterprise. Lockdown finds Matt Murdock serving time in prison while being allowed to keep his identity secret due to a Supreme Court ruling within the Marvel Universe. Being spotlighted as Daredevil doesn’t afford him any benefits, though and he quickly becomes targeted by his fellow inmates but also a corrupt warden.

END_OF_DOCUMENT_TOKEN_TO_BE_REPLACED

Chip Zdarsky has completely sold me on Daredevil, a character I previously was lukewarm towards. The Marvel street-level characters outside of Spider-Man never really caught my attention. For years, I’ve tried picking up a Daredevil issue here and there to see if a new creative team could garner my interest, but they’ve continuously sputtered out. Zdarsky’s take on Daredevil works so well for me because the title is basically a two-hander. The story being told is just as much about Matt Murdock as it is about Wilson Fisk, the Kingpin. Years prior, Fisk was elected mayor of NYC, a concept I don’t think any writer has done much interesting with until now. By spending so much time with Fisk, we have really understood and even empathized with the character. He’s undoubtedly a villain, but he’s also a person.

END_OF_DOCUMENT_TOKEN_TO_BE_REPLACED

When we last left Matt Murdock, he had reached one of his lowest points. He’s having an affair with a woman who married into the mob, the Daredevil is being actively hunted by the police, Wilson Fisk is the mayor of New York City, and he’s been physically broken down. This is the moment that Elektra shows back up in his life. Other civilians have picked up the mantle of Daredevil but are in over their heads. Elektra sees her role at this moment to remind Matt of why he is crucial to Hell’s Kitchen. There’s also Detective North, a transfer into the NYPD who is determined to bring down masked vigilantes and stop the roiling corruption in the police force. Tensions are incredibly high, and the powder keg feels like it will blow.

END_OF_DOCUMENT_TOKEN_TO_BE_REPLACED 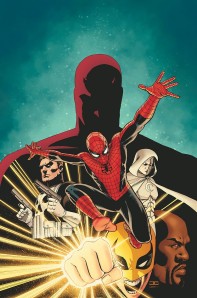 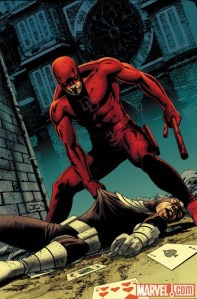 A few months ago if you had told me I would be excited to read the new issues of Daredevil I would have said you were nuts. Daredevil has been one of those characters that never clicked with me, not even the critically acclaimed Frank Miller run or Bendis’ over 100 issues on the series. Blind lawyer vigilante just never appealed. However, Andy Diggle’s current run on the character seems like a shift towards a very interesting change in the fundamental aspects of Daredevil. The once by the books lawyer has abandonded the law in favor of pure street justice and has walled in Hell’s Kitchen, turning into Shadowland, his realm under his protection. And those who get in his way will die.

It began with Norman Osborn. The former Green Goblin assumed control of America’s top security forces after saving the world from an alien invasion and some epic PR. Put in charge of SHIELD, renamed HAMMER, Osborn set out to turn New York’s heroes into criminals in the eyes of the public. HAMMER agents were told to target an tenement in Hell’s Kitchen labeled as a hiding place of the notorious ninja clan known as The Hand. The building was firebombed and 100 innocent people were killed. Daredevil blamed himself for not being able to protect his fellow residents of the Kitchen and pledged himself to The Hand, his long time enemies. They promoted him to the leader of the clan, over all else, and along with his lieutenants Black Tarantula and White Tiger they drove the NYPD from his kingdom. Unbeknownst to Daredevil, the other leadership in The Hand are pushing him down this path in an effort to unleash a level of power their group has never experienced. In the background Wilson Fisk, the Kingpin is slowly reassembling his crime cartel after being released from a long stay in prison.

The events of these first two parts finds Luke Cage and Iron Fist, two fellow street level heroes venturing into Shadowland to talk to Daredevil, who has distanced himself in the preceding months. What they find is that he is unwelcoming to any interference. Just around this time, Daredevil’s arch nemesis Bullseye arrives, newly escaped from a prison transport. How Daredevil deals with his longtime enemy shows Cage and Iron Fist just how different their old friend is. Foggy Nelson, Daredevil’s former law partner and Dakota North, a private eye and former lover of Daredevil, drive to the borders of Shadowland but are stopped by White Tiger and some Hand agents. As the two leave they are attacked and their card explodes due to a masked archer on the rooftops. Needless to say things are getting worse and worse in Hell’s Kitchen.

The idea of making Daredevil a villainous figure is very intriguing to me, and the main reason I have started reading this current run of the series. The blind superhero part of Daredevil/Matt Murdock has always been a yawn for me. What is more interesting is the fact that he is/was a lawyer. How does a man who has devoted himself to the law justify vigilantism to himself. The Shadowland story is revealing how years of tragedy (the murders of Elektra and Karen Page first and foremost) have scarred Murdock. The embrace of some of his worst enemies in The Hand, while pushing away his closest friends marks a major change in the psyche of the character. This is one of those character arcs that you can’t see them coming away from the same every again. In many ways this is probably as close as we would get to a storyline where Batman takes over the Gotham crime families, a story that would be amazing.

Next up: Shadowland #2 in August!