In 1977, Suzie, a young American woman arrives into the heart of political strife igniting Berlin. She has come to join the prestigious Markos Dance Academy, hoping to work under the tutelage of Madame Blanc. Suzie slowly becomes aware of interpersonal conflicts that happened between the matrons of the academy and former student, Patricia. Patricia fled the school and sought out the help of psychologist Dr. Josef Klemperer. She tells him that the women of the school have eyes and ears that can see her no matter where she goes and that she is a marked woman. Klemperer becomes further convinced when he reads the girl’s diary detailing her discoveries of a cabal working beneath the surface of the Markos school. All the while, revolutionary groups sow chaos throughout Berlin, dredging up guilt from the war and forcing a confrontation.

END_OF_DOCUMENT_TOKEN_TO_BE_REPLACED

I’ve never seen the original True Grit, mainly because I am not such a big fan of John Wayne. I’ve only seen two films of his (The Searchers and The Man Who Shot Liberty Valance). I totally get Wayne as an icon, but as an actor he seemed a little weak. So I entered the remake of True Grit with no expectations and found it to be a great western and adventure story, with enough subtext to keep me thinking for a long time. Despite advertisements, this is Hailee Steinfeld’s film. The other actors are there to support her and she does a magnificent job keeping up with the likes of Bridges and Damon.

Mattie Ross (Steinfeld) is the 14 year old daughter of a man shot in cold blood by Tom Cheney (Brolin), a dim witted scoundrel. Mattie travels to the location of her father’s body under the pretense of preparing it to be sent back home, but is actually out to find a hired gun to help her track down and murder Cheney. She happens upon the grizzled federal marshal Rooster Cogburn (Bridges), a man who shoots first and asks questions later. After some convincing, he agrees to take Mattie into Choctaw territory where Cheney ran off to. Before they can depart, Texas ranger Le Boeuf (Damon) who is looking for Cheney in relation to his murder of a Texas state senator. The trio bickers and bonds as they draw closer to their prey, which in the end will test each of their resolves.

The Coens are employing their strongest tactics in this film: dialogue and character. The language of the characters is so precise and specific, and this is how they have created countless memorable and iconic characters. True Grit is a showcase for the complex figure of Mattie Ross, whom could easily become a “girl power” anachronism. Instead, through well placed pieces of dialogue, we learn about Mattie’s role in her home and the extra responsibility she has been strapped with. She is both courageous and vulnerable in a way many female characters in film rarely are. Beyond Mattie, the central and side characters all have unspoken histories that we catch glimpses of. As she and Rooster travel the wilderness they encounter characters who may have a line or two (or none at all) and are fully realized figures in this world. The Coens succeed in producing another film chock full of those things that cause the brains of film geeks like myself to salivate.

With the remake of Wes Craven’s A Nightmare on Elm Street there is yet another horror film being “re-imagined” in theaters. But remaking horror flicks has been a mainstream trend since the 1960s and Hammer Studios buying up the Universal monsters. Here’s a film festival devoted to movies I think are the best among horror remakes. 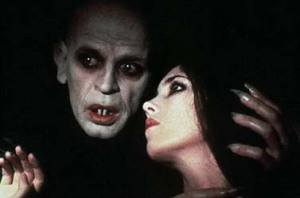 Acclaimed German filmmaker Herzog decided to remake F.W. Murnau’s vampire film, believing it to be the best film ever produced by a German director. The original silent Nosferatu was made as a result of the inability to get the right to the Dracula novel. Murnau makes a few tweaks, such a dehumanizing the title vampire lord even more. When Herzog’s version came long Dracula was now in the public domain so he was able to absorb more elements of it into the story. Certain scenes are exact recreations of the original silent picture but Herzog also develops the title vampire’s personality further, causing him to become a sad, pathetic figure more than a completely menacing inhuman monster. Also, there are few actors who were as prepared to play a ghoul as Klaus Kinski. 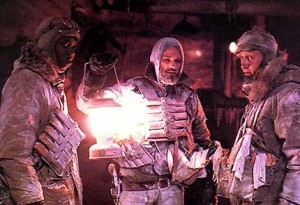 The original The Thing From Another World (1951) was directed by genre jumping master filmmaker Howard Hawks and reflected a post-Hiroshima fear of science. Carpenter’s remake was much more faithful to the source novel and included the element of the alien’s ability to mimic the cellular structure and appearance of living matter. Kurt Russell plays a member of an Antarctic science crew who encounter a husky running loose and its Norwegian science expedition owners trying to kill it. They learn quickly that the dog is a microbacterial alien species bent on wiping out all life on earth to appease its evolutionary directive. The film has some of gnarliest special effects ever put to film and creates a pitch perfect tone of paranoia. 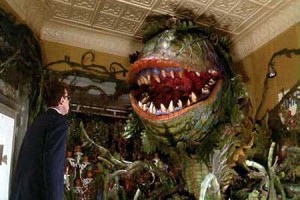 Director/producer Roger Corman is known by the loving term of “shlockmeister”, meaning he makes cheap, exploitative genre pictures that have total cult followings. His 1960 flick The Little Shop of Horrors was turned in to a stage musical in the 1980s and that was how we got this wonderful horror-musical-comedy. Moranis is Seymour, a plant store employee who discovers a strange plant that feeds on blood and flesh. He’s able to satiate with pin prick from his finger until the creature grows larger and he must resort to murder. The picture balances the right level of black comedy with a satirical commentary on early 1960’s America. Ellen Green is definitely the musical highlight of the film, reprising her role on the stage as Audrey. The special effects for the evil man-eating plant Audrey II are also wonderful, particularly its final “adult” form.

In 1981, Sam Raimi released cult favorite The Evil Dead and it opened doors for him to work on some slightly higher budget crime pictures. As the 80s came to close he accrued enough funding to remake this first great film. I know I was confused when I started watching this and realized it functioned as both a remake and a sequel to the first picture. The events of the original movie are retold in the first 20 mins while a new parallel story involving archaeologists is introduced. But all you really need to know about this one is that it has Bruce Campbell in it. And he gets a chainsaw hand. I mean the entire Spider-Man trilogy has nothing on that. This picture ends on a cliffhanger that leads into 1993’s Army of Darkness.

This remake is much better than its 1998 Japanese original. Here the city and atmosphere of Seattle are used to perfection without ever naming the city or making a spectacle of its skyline. Instead, the soaked, rainy, bleak tone of the region underscores the looming horror. A videotape is passed around and comes with the warning that anyone who watches it will die seven days later. It ends up in the hands of a Ruth, a woman working in the media. She watches the tape and is now in a race against time to figure out the origins of this phenomenon and possibly how to stop it. The picture is full of incredibly disturbing imagery and is able to use CG effects without feeling like we’re staring at a green screen. It also has one of the best twist endings and earns every second of it. They rarely make horror this enjoyable these days.

“Support the troops”. Its a slogan we hear time and time again. Yet, no matter how many yellow ribbons we put up or bumper stickers we slap on our cars, there is a severe situation involving soldiers coming home with Post-Traumatic Stress Syndrome. While Brothers addresses this, it fails to create compelling characters and ultimately comes off as preachy, rather than significant.

Capt. Sam Cahill (Maguire) is preparing to ship off to Iraq, and the day before his little brother Tommy (Gyllenhaal) is being released from prison. Cahill leaves Grace (Portman), his wife and two daughters behind and ends up being declared KIA. While, Grace deals with the loss with the help of Tommy, Sam is actually alive and well, being held by Sunni extremists along with a private in his unit. Sam is put under severe torture and starvation and made to commit horrible acts. Tommy finds himself drawn closer to Grace but the two fight their urges to give in. Eventually, Sam is coming home and there will be a falling out.

The film is slow, but that is not a bad thing. The plot involving Sam is very interesting and were the moments of the film I paid attention to the most. The Grace/Tommy story is where the film drags. There is really no chemistry between the two so the hints that they might end up together feels incredibly forced. The relationship is so muted to the point of feeling like a way to kill time till Sam returns home. The most compelling interactions are between Tommy and his father (Sam Shepherd). It seems their father dealt with PTSD upon returning from Vietnam and drowned it alcohol, eventually taking it out on the kids. Tommy ends up being the black sheep of the family, and Sam enlists in the Marines because of his idolization of his father.

The picture ends on a very melodramatic note, though its last 20 minutes are its best. The top performance comes from 11 year old Bailee Madison, who plays Isabella, Sam and Grace’s daughter. She very natural and composed for her age, and is a key part of the conflict in the film. Overall, a decent picture but this director has made much much better films.