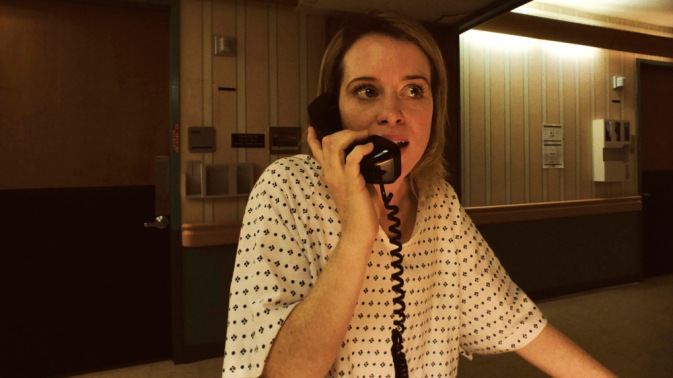 I went into Unsane with patient expectations, but I should stop doing that when it comes to Steven Soderbergh’s films. I think because he doesn’t adhere to the traits of many in the auteur camp I often forget what a great director he indeed is. Soderbergh doesn’t have a preferred form or technique in his filmmaking and makes such varied pictures. For Unsane, he gave himself the challenge of filming the entire movie on an iPhone. Using a variety of lenses and harnesses he gives us a very visceral delve into Sawyer’s splintering psyche. There is a scene where she has been given the wrong medication, and her subsequent lashing out is done such palpable psychedelic fury. Soderbergh overlays both a back view and front view of her head as the camera is attached to her from behind. The room becomes an incomprehensible blur.

I wasn’t familiar with Claire Foy before this picture and was impressed with how she takes on a considerably tricky role. She manages to find a place where she can emphasize the manic nature of Sawyer’s mental state but not come across as having completely lost touch with reality. She is also a nasty, cruel person but the film wants us to understand that as bad as she treats others, she is still a person who deserves to be treated with basic human dignity. Her abrasive nature ends up being a benefit because she eventually deals with her circumstances by using that steely coldness towards others to escape. I don’t expect you can walk away from the film and say Sawyer was a saint of a character. The film name drops The Gift of Fear by Gavin de Becker, a book that highlights the idea that “niceness” is a learned skill, not a default mode of being.

This leads to the film’s overarching relevance in our modern times. As the issue of harassment towards women becomes a broader and more nuanced conversation, we have to talk about the expectation of behavior from women. There is a trend right now in Hollywood to make every female lead a saintly, heroic figure. But in trying to right the wrongs in female portrayals on film we’re creating a just as bland landscape of characters, only on the other end of the spectrum. Complexity is the actual solution to representation. One dimensional characters don’t carry the emotional weight that a well written and complicated character does. Sawyer puts another female patient in a very questionable situation, and it doesn’t go well. But this adds to the conversation we should have about her actions when the film concludes. It makes Sawyer a fully developed character with strengths and flaws. It makes her human, which should be the goal of expanding representation in cinema.

One thought on “Movie Review – Unsane”