With this film, many changes happened to the Marx Brothers going forward. It was their first picture at MGM, having left Paramount on reasonably bad terms. Their contract expired, and they had no interest in renewing it with Paramount. Zeppo left the pictures and joined brother Gummo in working on the business side of things, forming a talent agency that would take on clients like Jack Benny and Lana Turner. Irving Thalberg played cards with Chico and worked as a producer at MGM. During their games, he began discussing the Brothers make a move to MGM but had some terms and conditions.

END_OF_DOCUMENT_TOKEN_TO_BE_REPLACED

Duck Soup is arguably the Marx Brother’s masterpiece. It is their last pre-code movie meaning it’s their last chance to push the boundaries of content in cinema. Duck Soup is also the perfect mix of the Brothers’ anarchic style and a semi-cohesive narrative structure. We still get gags and skits, but they feel much more connected to what is happening to the characters. Duck Soup wasn’t the smash hit that Horse Feathers was, and there was a lot of conflict between the Marx Brothers and Paramount during and after the production. The movie would mark the end of their relationship with that studio and send them to MGM for their next feature.

END_OF_DOCUMENT_TOKEN_TO_BE_REPLACED

College comedies have been a staple of motion picture since the silent era with Harold Lloyd’s The Freshman and Buster Keaton’s College being the most memorable. It made sense for the Marx Brothers to follow in those footsteps because, at the end of the day, their movies were often a vehicle to get them on screen doing routines and gags. They take advantage of the setting by using the pending football game as the crux of the plot and a finale set-piece. Some anachronistic elements could confuse contemporary viewers, but it’s not enough to make the movie unwatchable, just demanding a little more attention from the audience.

END_OF_DOCUMENT_TOKEN_TO_BE_REPLACED

Who were the Marx Brothers? Zeppo. Chico. Harpo. Groucho. Gummo. They were the children of French/German Jewish immigrants born into a family of artists and performers. Each brother mastered multiple instruments, and Groucho and Zeppo became accomplished singers. They became a Vaudeville act thanks to their uncle and began traveling the circuit, making money, and laughs. As time went on each brother honed their stage persona, Groucho became the de facto leader with his sharp, caustic comedy. When World War I struck, the Marx mother learned that farmers were exempt from the draft, so she bought a chicken farm in Illinois, but the boys found agrarian life was not their style.

END_OF_DOCUMENT_TOKEN_TO_BE_REPLACED

We begin at a bar in a banana republic where a forlorn and suicidal American banker is stopped from ending things by the bartender. The bartender is also an American, Dan McGinty, who tells his patron that he was once governor of a state in the U.S. From there we flashback to the story of McGinty’s rise and fall to power. During the Great Depression, he’s another jobless schmoe who is coerced into a voting fraud scheme for two bucks. He ends up showing an impressive level of moxie, and a local mob boss decides to use McGinty in his plans. He starts out as an alderman before moving to mayor and eventually governor of an unnamed state. But, as the film’s opening prologue tells us, one moment of good will topple McGinty back to the bottom.

END_OF_DOCUMENT_TOKEN_TO_BE_REPLACED 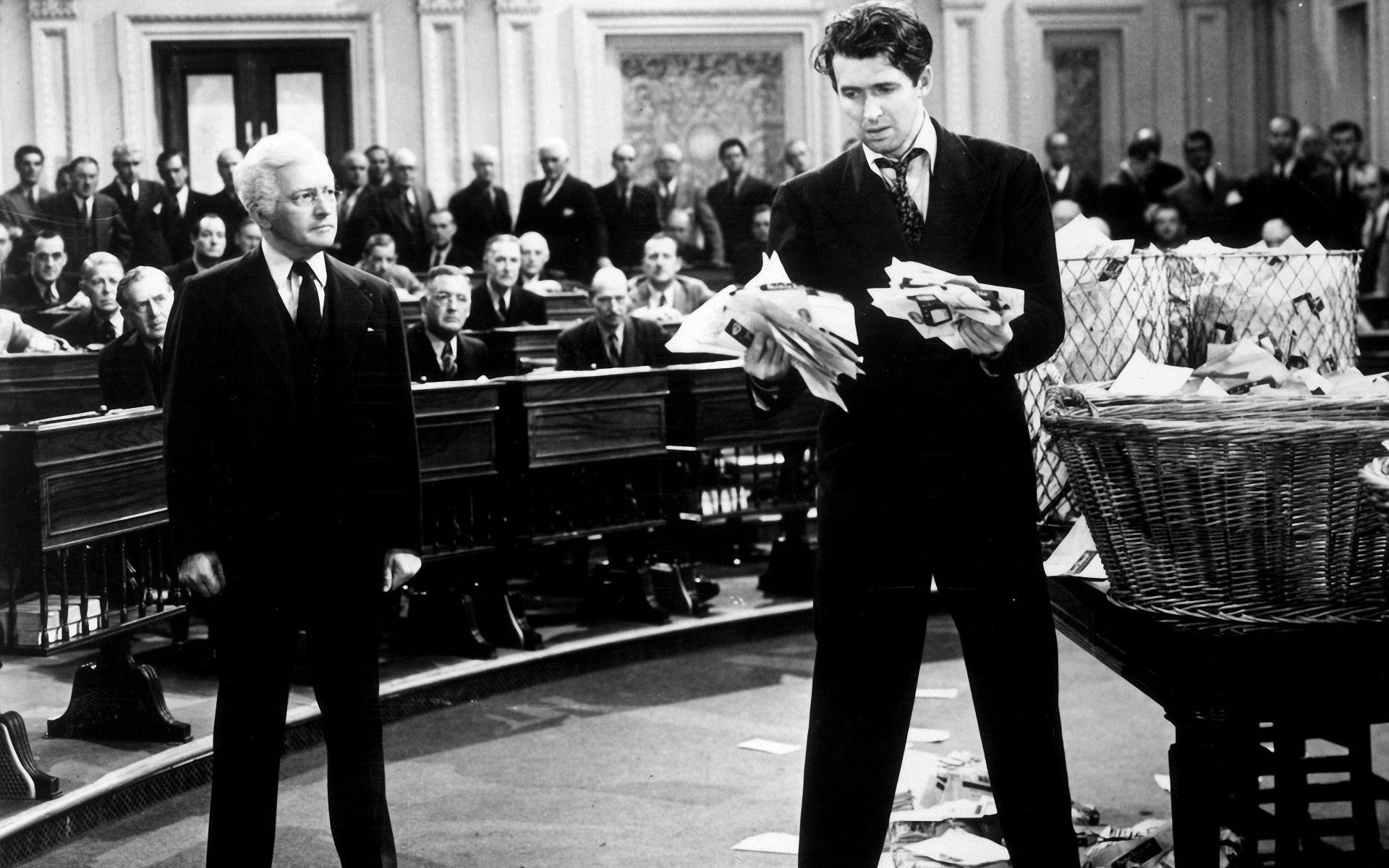 A senator from an unnamed state in the Western U.S. dies, and the governor is forced to name an honorary replacement until the next election can be held. He receives from pressure from his state’s other senator Joseph Paine. Paine is cahoots with corrupt political boss Jim Taylor to get a stooge onboard to help them pass a land purchase bill. The bill will sell the government land they own under false names, enriching them and leaving America with the debt. Encouraged by his children to pick a new local hero and scout leader, the governor names Jefferson Smith as the honorary replacement. Smith is naive and overwhelmed by the patriotism stirred in him once he arrives in Washington. His deceased father has a past with Joseph Paine from when they fought for labor rights in the past. As Smith learns about the working of America’s capital he discovers the ugly truth about the nation he loves.

END_OF_DOCUMENT_TOKEN_TO_BE_REPLACED

The economy is bad. Unemployment. The Housing Market. Small Businesses. Crashing every day. During The Great Depression, cinema reflected this moment in history where the common man was struggling to make ends meet. People were losing their homes, ending up jobless and on the streets, and Hollywood wasn’t afraid to put that up on the screen.There were many escapist pictures in the theaters during the Great Depression, particularly musicals, but even those had elements of the financial struggles people were under going. Not so now. Particularly during the summer, we have mindless film after mindless film, featuring people so distant and out of touch with our own reality that, for myself, I become disengaged. What I am shocked to see is reality reflected on the screen.

Barkley and Lucy have been married for fifty years when the bank notifies them that their home for all this time is being taken away. Barkley hasn’t worked in four years and he and Lucy don’t have enough money for a new place right away. They contact their four adult children and explain the situation. Behind the couple’s back, the children fight about who will take them, with it being decided that Lucy will go to stay with George, the eldest son, and Barkley will go to Cora, the eldest daughter. Lucy soon finds George’s wife and teenaged daughter don’t care for her presence in the home. Hundreds of miles away, Barkley has come down with a cold and is bedridden. Cora is infuriated she has to deal with him, but puts on the facade of a caring daughter when the doctor comes calling.

Make Way For Tomorrow introduces an idea that would still be controversial today in many circles: Do not live your life as a parent completely when you have children, you must have a definition outside of that. The children in the film are not monsters; stepping back when can see things from their point of view. But we also sympathize greatly with Barkley and Lucy, they truly gave every thing they had to their children and it may have not been the smartest move. Once their children became adults they vanished from their parents’ lives and only now have becoming aware of the financial situation back home. The relationship between Barkley and Lucy is deeply loving, its rare that I see a couple on screen when I completely buy their relationship. The paths the film leads them down are not happy ones, like the title suggests, it becomes about accepting change in your life.

Orson Welles said of this film that “it would make a stone cry”. He was exactly right. The love between these people is so pure and beautiful. The final sequence of the film involves them taking an unexpected car ride to the hotel where they honeymooned fifty years earlier. The coat check girl, the hotel manager, every one treats them in the way we wish their children did. The drinks are on the house, the band conductor plays an old tune when Barkley and Lucy hit the dance floor. Victor Moore and Beulah Bondi master these characters with a sly humor that undercuts a lot of the sadness that pervades the film. It doesn’t end on a hopeful note, but a realistic one, an admonition that life changes in ways don’t want. We are powerless to fight it, so instead we should embrace the people around us.

City Lights is so simple and perfect. This final scene showcases the fact that, while Chaplin is remembered as a great comedian, he also could tell a story of great emotional depth.

This is the scene in the film that truly sums up the insanity of war for me. It is the last American outpost in Vietnam and it is a waking nightmare.

While I am giving in-depth reviews to the Chaplin films I haven’t seen, I would be wrong in leaving out films of his I have seen previously, especially because they are some of his best work.

Made after the box office failure that was A Woman of Paris, Rush has Chaplin conjuring up some of his most iconic comedy moments. The dancing rolls bit, which has been referenced continuously in pop culture since. At one point starving miner imagines Chaplin transforming into a human sized turkey. We also have Chaplin boiling and eating a shoe. Chaplin originally intended to shoot the film on location in Alaska but nature had other plans. There is one on location shot in the film and its a gorgeous one. The rest was filmed on Chaplin’s United Artists sound stages. If you are looking to make a list of must see films for historical significance, this is a must for that list.

This is my personal favorite Chaplin picture and I think its one of the best romantic comedies ever made. The Little Tramp befriends a blind flower girl whom mistakes him for a millionaire. The Tramp promises he will raise enough money for the young woman to have a costly procedure. To do so he signs up for a boxing tournament and the crux of the comedic action revolves around that. The film features one of the best scenes in cinema at its climax when the young woman, now sighted, learns the truth about the Little Tramp. I actually brought a girl to tears in college simply by describing in detail this scene. A beautiful film with a big heart. 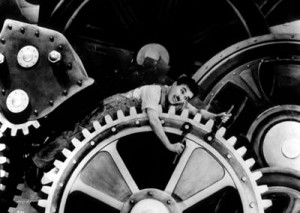 This is the last major American film to make uses of silent movie title cards (ignoring silent film parodies that would come after). Chaplin billed this as his first “talkie” but plays with audience expectations while making a point. The only voices heard come from the abstract machinery of the factory the Little Tramp works in. It was all part of Chaplin’s ideas about how technology was being used improperly and, instead of empowering mankind, it was being used to take their humanity away. Chaplin also wrote the film’s ending song “Smile”, which has become a standard since (“Smile though your heart is aching Smile even though its breaking”). 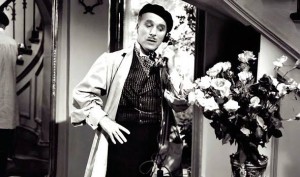 This was a drastic departure for Chaplin. There was no Little Tramp present here. Instead, he plays recently fired banker Henri Verdoux. Struggling to support his family, he decided to begin marrying rich women, murdering them, and absconding with their money. Chaplin plays the picture as a pitch black comedy and had a lot of difficulty with the Production Code on this one. The point behind the picture came from the idea that if a man murders a few people for money he is a criminal, however if he mass murders as in a war he is a hero. The film proved that Chaplin had little concern for box office returns, and really want to make films that were of interest to him.