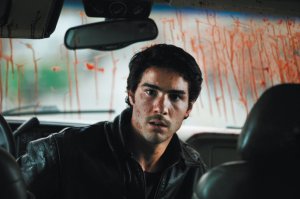 Un prophete is playing at the Belcourt Theater starting today.

Everyone loves a story of “boy makes good”. Nothing better than a young man pulling himself up by his bootstraps and making a name. The only downside is the body count. That story is what French film Un prophete seeks to tell, and colors its story with issues of racial identity, particularly how it can influence other’s perceptions of us. And the film also manages to not miss the simple moments amongst all the crime and violence. It’s in those moments that the picture shines.

Malik has just entered prison after an undisclosed crime. He’s a very young Frenchman of Arabic descent, who is incredibly nervous and introverted now confronted with years in prison. After a chance encounter with Arab inmate Reyeb, he’s recruited by the Corsican mob on the inside to kill this rival. That murder colors Mailk’s existence, Reyeb appearing in his bed in the middle of the night, his garish throat wound still present. The haunting happen in such a subtle way, Reyeb just suddenly there, Malik never jumping but living with this ghost in his mind.

Malik begins taking on more responsibilities with the Corsicans, who still view him as a “filthy Arab”, while the Arabic in prison see him as a “Corsican dog”. It’s evident that this labeling has a strong effect on Malik. Despite this internal conflict, he soldiers on, running errands while on day leave for Cesar, the head of the Corsican prisoners. What Malik doesn’t tell Cesar is that he is starting his own low level operations on the outside, particularly running drugs.

Every thing Malik does is out of an innate sense of survival. He knows he won’t make it long on the inside so he takes the murder job from the Corsicans, spending hours trying to hold a razorblade on the inside of his cheek for preparation. The film lingers on those moment of prep time, letting Malik fester in the anxiousness of what he has to do. As terrible as you know his actions will be, you still root for him, want him to get away with it because of his relative innocence compared to the weathered inmates around him.

One of the highlights of the film comes when Malik flies a plane to meet with Arabs in Italy. This is his first plane ride and, instead of skipping over it to get to the action with the Arab mob, the film pauses and lets us see Malik’s wonder at riding in a plane. He peers over his seat mate for a glance out the window and is surprised when a flight attendant brings him cookies and glass of water. Scenes like this are what make Un prophete stand out from other “rise to power” mob stories. Malik’s tale ends in the way the audience will probably expect, but its not his position as the new boss that is important, its the journey that brought him to it and the person he was that he left behind.

Starring Michael Fassbender, Liam Cunningham
The fight between Catholic and Protestant sides in Northern Ireland has devastated that country since the late 1960s. Each side has visited monolithic brutality on the other in of the greatest displays of community inflicting such cruelty on itself. But the cruelty that was the worst, was that of employees of the British empire on IRA members imprisoned in facilities across the country. Director Steve McQueen never give support for the terrorist actions of the IRA, but advocates that all prisoners, regardless of their crimes, deserve humane treatment.
The film’s focus is real life IRA soldier Bobby Sands (Fassbender). While the film doesn’t explicitly cover his activities with the IRA, he was no saint. He helped ferry weapons for the movement and was involved in the bombing of a furniture store in 1976. The film chooses to portray Sands as a figure unwilling to budge an inch for the brutal authority crashing down around his head. In this effort he has allowed himself to become dehumanized. Simply put, he has been caged and treated like an animal, so he will behave like one. Sands smears the walls of his cell with his own feces, allows the daily meals to rot and mold in a corner, and funnels his bed pan (synchronized with the other prisoners) out into the hallway. Is it vile? Yes. But there something innate within us that despise authority that wishes to break us, so it comes off as bizarrely admirable.
Bobby’s most memorable, and final, triumph came when he began a hunger strike in 1981 which took his life after several painful months of starvation. Michael Fassbender destroyed his body through malnutrition to take on the gaunt, sunken appearance of a Holocaust victim. He become the specter of death with additional help from an incredibly talented makeup department. His back is covered in open sores, he’s unable to urinate for the prison doctor’s physical, and he stains his sheets with black, acrid blood. The moments before Sands passes are truly powerful. The film moves into his consciousness as hallucinations of his younger self appear and his mind travels back to long distance race where he and both Prot and Catholic youths ran together, in fields of golden amber. Director McQueen doesn’t want you to take the IRA’s side, he wants you to realize how irrelevant any side is, and simply see a man dying.
The aesthetic choice made by McQueen are magnificent. For the first 30 minutes of the film there is little or no dialogue. Only 50 minutes in is there an actual conversation between two people for extended amount of time. Here Sands and a priest from his community debate the point of standing in defiance of authority. The priest tells Sands he must submit to the uniform being enforced on the prisoners and Sands simply won’t budge. Once again, neither side wins in the debate. They simply come to the conclusion that neither of them will change their ideas about it. Hunger is one of the best examples of director using the language of cinema to tell a visceral and moving story. There is no maudlin sentimentality, yet there is a deep emotional core. Not for those lacking a strong constitution, but one of the most amazing British films I’ve ever seen.
Follow PopCult Reviews on WordPress.com